You guys — In just four days, I’ll be on a plane headed to Anaheim! Well, actually John Wayne Airport is in Santa Ana, but close enough.

This will be my first time back in California since moving away from it in January. It also marks my grand return to the D23 Expo after I inexplicably skipped the 2013 festivities. In fact, I think I only went for one day of the Expo in 2011 meaning I haven’t had a proper D23 experience since the inaugural gathering six years ago. I’m not quite sure what kept me away from the last two outings, especially considering the amazing time I had back in 2009.

I don’t think anyone quite knew what to expect from the first D23 Expo until it happened. The club itself was only about six months old and had already gained some detractors; many saw the first Expo as make or break for the Official Disney Fan Club. I suppose the fact that we’re it’s still here and presumably growing (the Expo itself, at least) is proof that it was a success.

It’s easy to forget now, but the first Expo had a few major difference. For one, it took place in September instead of August. But the biggest difference was that it last for four days as opposed to three. Considering that — like the Walt Disney Company itself — the D23 Expo is much larger in scope with Marvel and now Star Wars on board, I’ve pondered if a return to this four-day format is in the cards. But, if anything, I think most would argue that a switch to an annual instead of biennial (that means “once every two years” — I double checked) event is probably a more likely scenario.

Back to that first Expo, I had just moved to California and my main source of entertainment were podcasts — namely Disney ones. Like radio, one of the odd phenomenons of podcasting is that long-time listeners may grow to feel they know the host and contributors of a given show. The other odd thing is that, while they may have seen a couple of photos floating around the web, listeners are more likely to recognize their favorite show hosts from their voices.

By the time I arrived at the Anaheim Convention Center, plunked down my $15 to park, and made my way to the Expo entrance, it was around 5:15 a.m. There was a small line out front but nothing ridiculous. After a while of standing there, I heard a familiar voice behind me belonging to a man named Lee Scott. Sheepishly, I approached him to confirm his identity and inform him that I was a big fan of his show. He thanked me and invited me to hang out with him while we waited to enter the convention center.

Once inside, we were surprised to see that a huge portion of the first people in line were more interested in the limited merchandise than they were the keynote and Disney Legends ceremony that were happening a mere hour or two after the doors opened. As a result, Lee and I were amongst the first dozen or so to queue up for what would be the Expo’s first presentation. When we first got in line, Lee briefly greeted someone nearby that he knew and introduced me to him. After that, the mystery man (who’s name I’m still keeping a secret partially as a joke and partially because I’m used to it after six years) went back to chatting with others. That’s when I realized I recognized his voice as well… It was “Fanboy” from this very site. 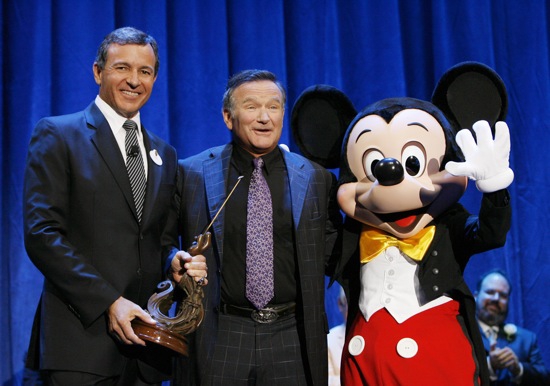 Although he calls it one of the worst kept secrets, knowing Fanboy’s real name and getting to meet him made me feel incredibly special. It wasn’t even noon on the first day of the first D23 Expo, and I was already sitting (nearly) front row of the arena sandwiched in between two of my favorite podcast personalities — this was going pretty well.

At some point during the weekend, I came down with either a small cold or some allergies that caused me to sleep in instead of aiming for a similar early morning arrival (I should mention that I was driving from Rancho Cucamonga each day and not staying in Anaheim). While this illness led me to actually miss the Parks and Resorts panel entirely (although I didn’t miss much, apparently), I was still able to make it to the Studios presentation hosted by Dick Cook. It was ridiculous to us that Cook, who brought out a cavalcade of stars including Johnny Depp in full Jack Sparrow regalia could be fired from his position mere months after putting on this Expo highlight.

I suppose what happened in 2011 and more so in 2013 was just a case of life getting in the way. Apparently money is required to attend such events and, incidentally, taking time off of work won’t make you any. While I certainly haven’t missed any news from the Expos (especially since it shows up on Twitter between 11 seconds and 30 minutes after it happens), I did feel ill-equipped to advise my friend Aaron Wallace on what to expect for his first Expo next week. 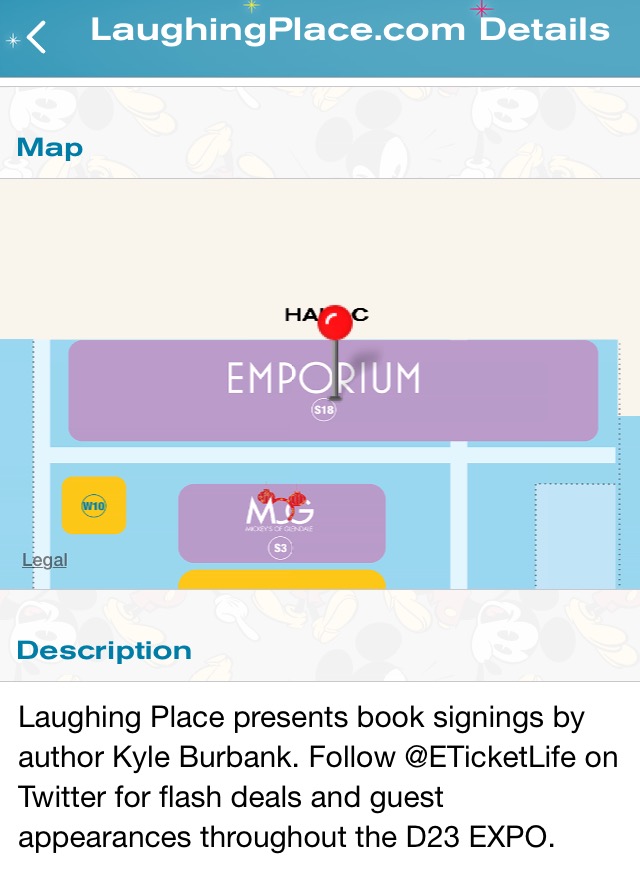 What’s also interesting that I have barely looked at the line-up of panels for this year’s convention since I will not be able to attend any. Why, you ask? Well, I’m so glad that you did…

In case you didn’t know, I will be at the Expo manning the LaughingPlace.com booth! There I will be selling my new book The E-Ticket Life: Stories, Essays, and Lessons Learned from My Decidedly Disney Travels. Aaron is also debuting the 2nd Edition of his amazing 2013 book The Thinking Fan’s Guide to Walt Disney World: Magic Kingdom ahead of its release into bookstores on Labor Day. I’ll be there for 99% of the time to say “hi” and sign books while Aaron will be joining me at select times.

The LaughingPlace.com booth is #C2004 on the show floor and is near Hall D23 (AKA “The Big One”). I hope you’ll stop by to chat and maybe even pick up a copy of the book. More importantly, I hope you have and amazing and memorable Expo experience… or, dare I say, have an E-Ticket Expo.