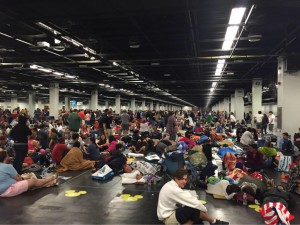 On August 15th, Disney fans crammed into the Anaheim Convention Center in hopes of attending “Worlds, Galaxies, and Universes: Live Action at the Walt Disney Studios.” Thousands camped out overnight to fill every seat for the most in-demand experience of the entire D23 Expo, the legendary live action presentation. Ever since the very first year, this has been the holy grail of presentations thanks to the cavalcade of stars that Disney is famous for parading in the hopes that you will see each and every film on their release schedule. 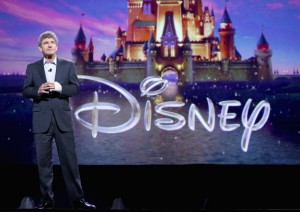 Chairman of the Walt Disney Studios Alan Horn kicked things off by explaining that the three studios arm-wrestled to determine who would present first. Marvel won and he attributed this to the fact that “Everyone at Marvel is buff… and everyone’s named Chris.” With that, he passed things off to Kevin Feige, who could have blended in amongst the fans with his WED Enterprises baseball cap. 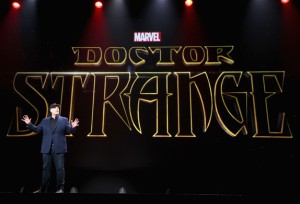 After a big “Thank you” for making Phase Two a huge success, Kevin gave a preview of Phase Three with a character who is obscure unless you read the comics, Doctor Strange. The film’s star, Benedict Cumberbach, is playing in Hamlet right now and couldn’t make it, so he recorded a special video just for D23. He promised that the film will offer “Girls, cars, astral projections… the usual fare.” Feige unveiled a reel of concept art for the film to wet our whistles and although its still early, it looks like it could be another Guardians of the Galaxy-type success for Marvel. 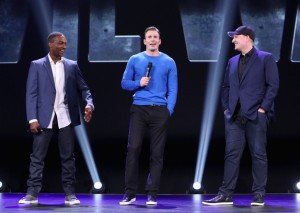 Next up was the first film of Phase Three, Captain America: Civil War. There’s still one week left of production in Germany, but Anthony Mackie flew in that morning to greet that fans. However, within moments of taking the stage, Mackie said “You didn’t think they would send just me, did you?” The audience went wild and rose to their feet as Captain America himself, Chris Evans, took the stage to explain how he loves Disney so much that he often watches people’s Disney vacation videos on YouTube. He flew in from Germany just for his two minutes on stage, only to fly back to finish the film. Feige presented an action-packed scene from the upcoming film, teasing that there was a special Easter Egg just for D23. When Alan Horn took over after the clip, he rewound the film to make it obvious. On a door that conceals Bucky Barnes behind glass, there’s a big “D” in the bottom left corner and the number “23” in the bottom right. 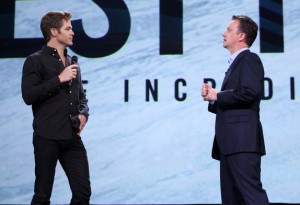 After Marvel Studios, Walt Disney Pictures president Sean Bailey talked about how fairytales are driving the live action slate. However, the first film presented was more in line with movies like Saving Mr. Banks and Remember the Titans. The Finest Hours tells the true story of a 1952 Coast Guard rescue team to save the crew of a stranded tanker. Against the odds of the storm and the fact that their ship could only hold half the rescued crew, they managed to save everyone from the wreckage. Chris Pine stars in this gripping emotional roller coaster ride and came out to talk about what it was like working with cold water and meeting the real-life heroes that inspired the film. 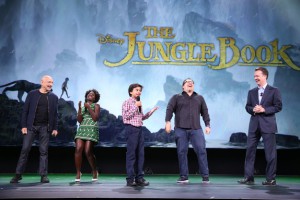 The Jungle Book was the first animation-to-live action film of the presentation and director John Favreau is incredibly enthusiastic about this film, which uses groundbreaking technology to retell this classic tale. He has worked closely with Richard Sherman, who was a member of the story team, to create a film that is just as much inspired by the Disney film as it is the Kipling novel. He brought out some of the stars, including Sir Ben Kingsley (who received a long standing ovation), Lupita Nyong’o, and the young actor playing Mowgli, Neil Sethi. Neil had to film the entire movie twice as Mowgli, once in motion capture and again on the sets. They screened a reel from the film that played like a trailer, although Favreau stated this is not the trailer. To say it looked amazing is an understatement. Not only was it visually impressive, but the characters and casting choices seem so perfect and after hearing a little tease of Billy Murray’s version of “The Bear Necessities,” all 7,500 fans were sold on this film. 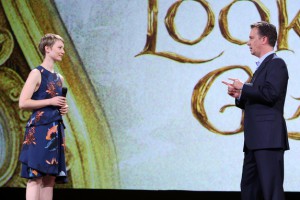 Alice Through the Looking Glass continues Disney’s recent legacy of empowering women through their films. The first major announcement was that Sacha Baron Cohen is in this film playing Time, literally. When Alice returns to Wonderland, she has to stop Time from changing everything and finds herself meeting characters from the first film when they were younger. Mia Wozikowski took the stage to say how excited she was to return to this world and these characters before they unveiled the trailer. If you enjoyed the first film, this one looks like a ton of fun. 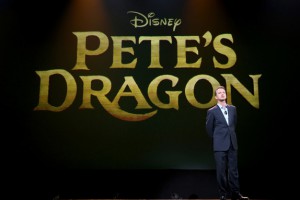 As a huge fan of Pete’s Dragon, I was very nervous about Disney’s live action remake. Based on a treatment by David Lowry, this non-musical version takes place in a forest in the North East. Bryce Dallas Howard came out in her trademark heels to explain her character Grace, who replaces Nora in this version. Grace is a park ranger who takes care of her father and one day, she finds a young boy in the woods whose been living on his own for several years. They teased a clip where Robert Redford, who plays her father, looks at a drawing of a green dragon and says “The boy drew this?” The clip ended with the boy’s hand touching something furry and Sean Bailey confirmed that that was the dragon. It’s too soon to make many judgments on this film. 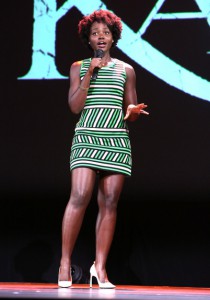 Catching everyone off guard was The Queen of Katwe, the true story of Phiona Mutesi, a Ugandan chess prodigy. Lupita Nyong’o returned to the stage to share her excitement for this story. Growing up in Kenya, she greatly admired Phiona growing up and it was such a joy for her to return to her home country to make this film.

The audience went crazy as Sean Bailey introduced the next film, Disney’s live action musical retelling of the Oscar nominated animated classic, Beauty and the Beast. They are still filming in London and unlike Marvel Studios, Bailey didn’t allow them to pause for a day to fly any of the cast to Anaheim. So instead, Emma Watson (Belle) recorded a special greeting and then passed things off to Josh Gad (Lafou) and Luke Evans (Gaston) who sang a verse of “Gaston” with adjusted lyrics. Bailey also confirmed that Alan Menken and Tim Rice have written two new songs for this lavish film. 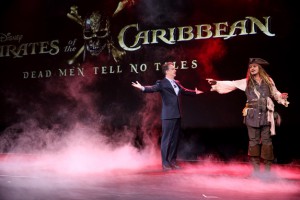 When speaking of Pirates of the Caribbean: Dead Men Tell No Tales, the stage began to fill with smoke as Sean Bailey announced that Will Turner (Orlando Bloom) would return for this film and that Javier Bardem will play the villainous Captain Salazar. He then welcomed Captain Jack Sparrow to the stage and there he was, not much unlike at previous D23 Expos. Johnny Depp in full costume, gracing the stage completely in character. He walked around enjoying the thunderous applause and sharing his bushel of grapes with the audience by throwing them out towards them and yelling “Grape!” each time. He then confessed “I don’t even like grapes.” Filming recently wrapped in Australia and Sean Bailey and Jack Sparrow waived goodbye as they disappeared behind the curtain.

As Alan Horn returned to introduce the third and final studio, the camera panned from the castle on the screen up into the stars as he talked about Lucasfilm (Kathleen Kennedy couldn’t attend because she was taking her daughter to college). Among the Star Wars news announced was that Rian Johnson is writing Episode VIII and that Colin Trevorrow will be directing Episode VIIII. He debuted a cast photo from Rogue One, the first anthology film, and announced that the next one is a Han Solo origin story written by Lawrence and Jon Kasdin and directed by Phil Lord and Chris Miller. 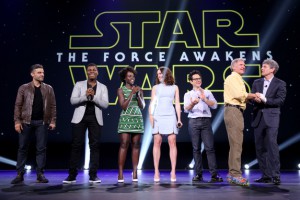 J.J. Abrams came out to hype up The Force Awakens and brought with him members of the cast, including John Boyega, Oscar Isaac, Daisy Ridley and Lupita Nyong’o. They then revealed a new poster by Drew Struzan which featured three of the actors with Harrison Ford. That’s when J.J. asked if they should bring out the other cast member on the poster. Every single audience member jumped out of their seats in excitement as the curtains parted and Harrison Ford humbly walked out to join them. The applause didn’t stop and he practically had to beg us to quiet down so he could speak about how excited he is to see what Disney is doing with Star Wars. The cast said a huge “Thank you” to the fans as they left. 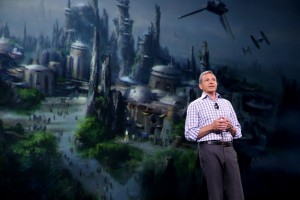 That would have been a perfect ending to the presentation, but wanting to go out with a bigger bang, Bob Iger took the stage. Rather than waiting three hours to make this announcement at the Parks & Resorts presentation, Iger broke the news that a 14-acre Star Wars themed land is coming to both Disneyland Park and Disney’s Hollywood Studios. Specific locations within each park were not mentioned, but he did state that it will feature two brand-new attractions and a cantina. He showed several pieces of concept art and any Star Wars fans in the audience left with a new level of excitement for the future of Disney Parks as well as the Disney films coming out in the near future, the distant future, and also a long time ago in a galaxy far, far away.