On Saturday, August 15th, guests queued up for the biggest presentation at D23… the live action movies panel. But for the many that didn’t make it into the 7,500 seat Hall D23, they got to be among the first in line for the next best thing, the Walt Disney Parks & Resorts presentation. And if you were there, you’ll know that most people were unintentionally calling it “Parks & Rec” without realizing the mistake (hee, hee, hee). 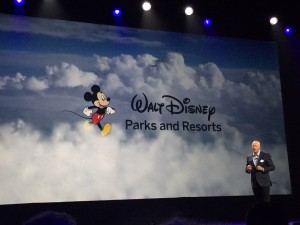 Bob Chapek, the new head of Parks & Resorts, took the stage looking nervous and goofing up a few of his teleprompter lines. But he connected with the audience as he explained that as a young boy growing up in the Midwest, family vacations to Walt Disney World helped him realize his dream of working for Disney. He gave a big thank you to the hardworking Cast Members at the parks and also to Tom Staggs, who was president while most of the day’s announcements were being planned.

Bob Iger had already broke the news about Star Wars Land a few hours earlier and even those who missed that panel already knew all of the details. Bob Chapek introduced the Imagineer in charge of this project, Scott Trowbridge, who gave a little more information, but not much. All we really learned is that the land will feature favorite classic characters plus new ones and that we will get to find out what “bantha fodder” tastes like while pairing it with a glass of blue milk. 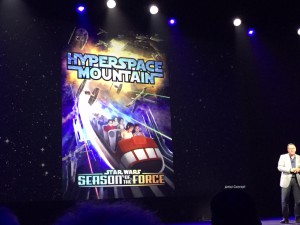 Piggybacking off Star Wars Land, Scott teased enhancements coming to both Star Tours and Jedi Training Academy. But the biggest announcement of the whole presentation, and the only one that really drew a thunderous applause, was the new seasonal event called “Season of the Force” which is coming to both Disneyland and Walt Disney World in 2016. For Disneyland, this special event includes an overlay to Space Mountain, which will become Hyperspace Mountain similar to the way it becomes Ghost Galaxy at Halloween Time. For Disney’s Hollywood Studios, it includes a new fireworks show. Chapek then introduced Kathy Mangum as he announced Toy Story Land coming to Disney’s Hollywood Studios. They didn’t say where in the park this will be located, but she did confirm that it’s not a mere clone of the land at Disneyland Paris. The WDW version features two new attractions, Little Green Men (looks like Francis’ Ladybug Boogie in A Bug’s Land) and a Slinky-Dog coaster. She said it would have the same level of detail as Cars Land, but it looks similar to A Bug’s Land in scope. 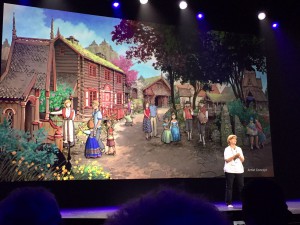 Kathy’s other responsibilities include overseeing the Frozen experiences coming to Epcot. She said they are working with the animators as they design Frozen Ever After and that the Lopez’s have written new lyrics and dialogue for the boat ride that is replacing Maelstrom. She also revealed concept art for the new meet & greet location, which is inspired by a Norwegian summer house. The audience seemed unimpressed, especially since Frozen’s inclusion at Epcot is controversial to many diehard World Showcase fans. 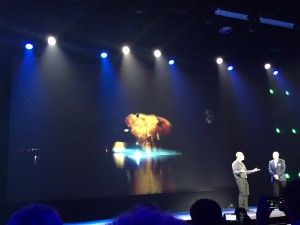 The audience got boisterous as Joe Rohde was introduced to give us an update on Disney’s Animal Kingdom. In Bob Chapek’s introduction, he actually used the phrase ‘Make it a full-day park.” Joe talked about the firefly and projection effects for the Tree of Life at night to help give the park a natural looking, dusk feeling well beyond sun down. To keep Kilimanjaro Safari open into the evening, they are adding wild dogs and hyenas that are most active at night. And he briefly talked about the river show with some computer animated demos of some of the effects, which looked like a toned down version of World of Color. He segued into Pandora, the land inspired by Avatar, by talking about how immersive it will be. WDI is working with James Cameron’s company LightStorm to create floating mountains, soaring banshees and bioluminescent plants that will feel real to guests. He said it will be “A transformational experience.” James Cameron and Jon Landon joined Joe on stage as they explained that this is not a retelling of the story of the film. It places you into the setting and you create your own adventure. The E-Ticket attraction, Flight of Passage, will make you feel like you’re really flying. Weta Digital created all of the effects in this scenic thrill ride. As for the family boat ride, they described it as “fluid and romantic.” That attraction will be the best place to see the bioluminsecent forest. The main goal of Pandora is to remind visitors that earth is an incredible planet. Since James Cameron’s birthday was just a few days away, Joe surprised him by having the entire hall sing “Happy Birthday.” 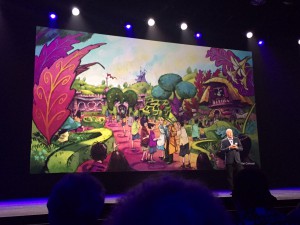 Bob Chapek returned to shift the focus to the international parks. Starting with Tokyo Disneyland, he hyped up the 500 million yen Fantasyland expansion that will add a Frozen attraction, Alice in Wonderland maze and Seven Dwarfs Mine Train to the resort. He unveiled the logo for Disneyland Paris’ 25th anniversary celebration and also congratulated Hong Kong Disneyland on its 10th year. He presented concept art for the new explorer hotel coming to the Hong Kong resort before introducing Ted Robledo. 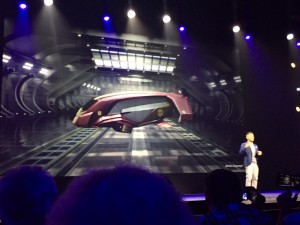 Marvel’s Iron Man Experience is a new attraction coming to Hong Kong Disneyland, the first Marvel attraction in a Disney park. Ted shared some concept art and a look at the ride vehicle, which makes it seem like a simulator-style attraction similar to Star Tours. In the story, Tony Stark is at the grand opening of Hong Kong’s Stark Tower when Hydra enters to steal the giant arc reactor on top of the building. Tony suits up as Iron Man and you tag along in the Iron Wing (a plane version of Tony’s suit) to help him win the battle. He played a demo of some of the animation already complete, which is being done by Industrial Light and Magic. 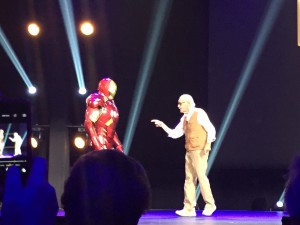 Throughout the pitch, Ted kept trying to welcome Iron Man to the stage, and each time he would fail to show up. It felt overly staged as he announced a giveaway to one lucky audience member, who would receive an all expense paid trip to Avengers Tower. The winner was Stan Lee and Bob Chapek pretended not to know who he was, saying “Congratulations Stanley” back to him. For the parks presentation, two sliding door vestibules were added to either side of the stage and the reason for them became clear when Iron Man finally arrived. Using a projection effect, you saw his silhouette fly in and land hard behind one of the doors before they parted and the walkaround character came out. He had some pre-recorded dialogue and was supposed to chat with Stan Lee, but when Stan missed his queue it became adorable as he tried to finish his lines as Iron Man was still speaking. 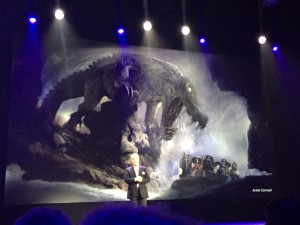 Looking forward to Shanghai, Bob Weis took the stage to talk about a place that 90% of the audience will never travel to. Starting with the legacy of Snow White and the Seven Dwarf‘s success in China in the 1940’s, he discussed the six themed lands of the new park: Fantasyland, Tomorrowland, Adventure Isle, Treasure Cove and Gardens of Imagination. Your gateway to these lands is Mickey Avenue, where classic characters are the proprietors of every shop and where the buildings are rooted in Disney architecture. Gardens of Imagination will be the themed hub area, featuring the longest parade route of any theme park to date and includes the uniquely Chinese Wandering Tea House. Treasure Cove is your destination for all things Pirates, including the new attraction based on the films, Battle for the Sunken Treasure. Tomorrowland will feature the incredible looking Tron Light Cycle coaster, which received a loud cheer as the audience clearly wished it was coming to a domestic park. Adventure Isle will feature Roaring Rapids Mountain, which features an encounter with a prehistoric Chinese dinosaur. The centerpiece of the park is Enchanted Storybook Castle, which features a restaurant, water ride and an interactive Snow White attraction, taking it back to where it all began for Disney in China. 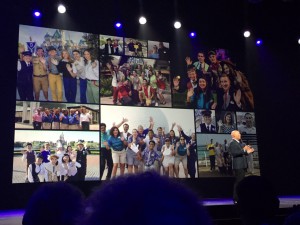 The final announcement was Soarin’ Around the World, which will replace Soarin’ at both Disney California Adventure and Epcot. Bob Chapek showed footage of the camera mounted to the bottom of a helicopter flying through Monument Valley and along the Great Wall of China. It looks cool, but has been the “worst kept Disney secret.” The audience was not only tired of waiting all day, but felt like this was old news by this point. 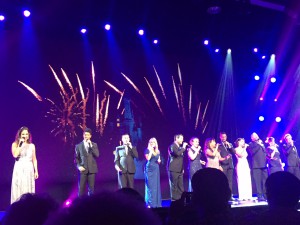 To end the show, a choir filled the stage to perform a medley of Disney’s nighttime entertainment songs, including “Kiss Goodnight,” “Step into the Magic,” “World of Color,” “Illuminations” and “Fantasmic.” The screens depicted footage from each show as they sang pieces from it, but it oddly flashed to “Wishes” on the screen while they sang a song that sounded like it fell out of Tokyo Disney Seas. At no point in the medley did they actually sing anything from “Wishes.” And with that, the show was over.

In summation, the only things the audience seemed genuinely jazzed about was Hyperspace Mountain and the Tron Lightcycle coaster. They respectfully applauded for everything, but other than a cameo from Stan Lee, we were all either too tired from waiting all night for the live action presentation or our voices were too tired from screaming for Harrison Ford to properly cheer for the parks. And since the wonder of the Star Wars Land announcement had already been revealed before this, it wasn’t as wondrous the second time around.