Season of Force at the Disneyland Resort

Located on the lower level of the Tomorrowland Expo Center (formerly Innoventions), Star Wars Launch Bay is the central space for fans to celebrate all things Star Wars. This new area is conceived as a constantly evolving showcase of what is new in the Star Wars galaxy, from theme parks to movies and from merchandise to comics.

With First Order stormtroopers from Star Wars: The Force Awakens, patrolling the area outside Launch Bay, guests inside may meet iconic characters such as Darth Vader, Chewbacca or Boba Fett.

Guests entering the Star Wars Launch Bay will be welcomed with an opening crawl, just like the films. The Cantina is an open space featuring holochess and sabacc tables. It is also promoted as  a wretched hive of scum and villainy where guests may meet less than moral characters from the Star Wars Saga. Guests can join the Resistance (the good guys) or be swayed to the dark side, by picking one of two character greeting experiences. When we tried it Chewbacca was meeting guests who picked the light, while Darth Vader was meeting those whose path was through the dark side. The meet and greets are fully immersive and are inspired by a Rebel base or a Star Destroyer.

Guests will find Aurebesh writing throughout the experience. Those that are familiar with Star Tours will recognize this writing from the flight information screen. 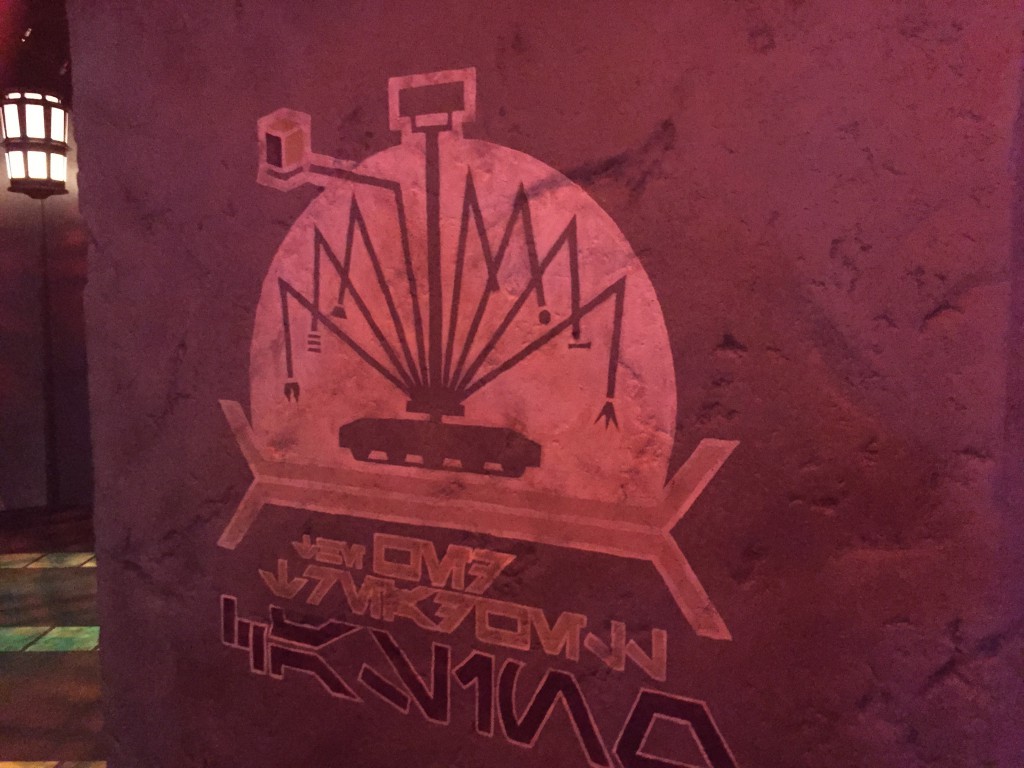 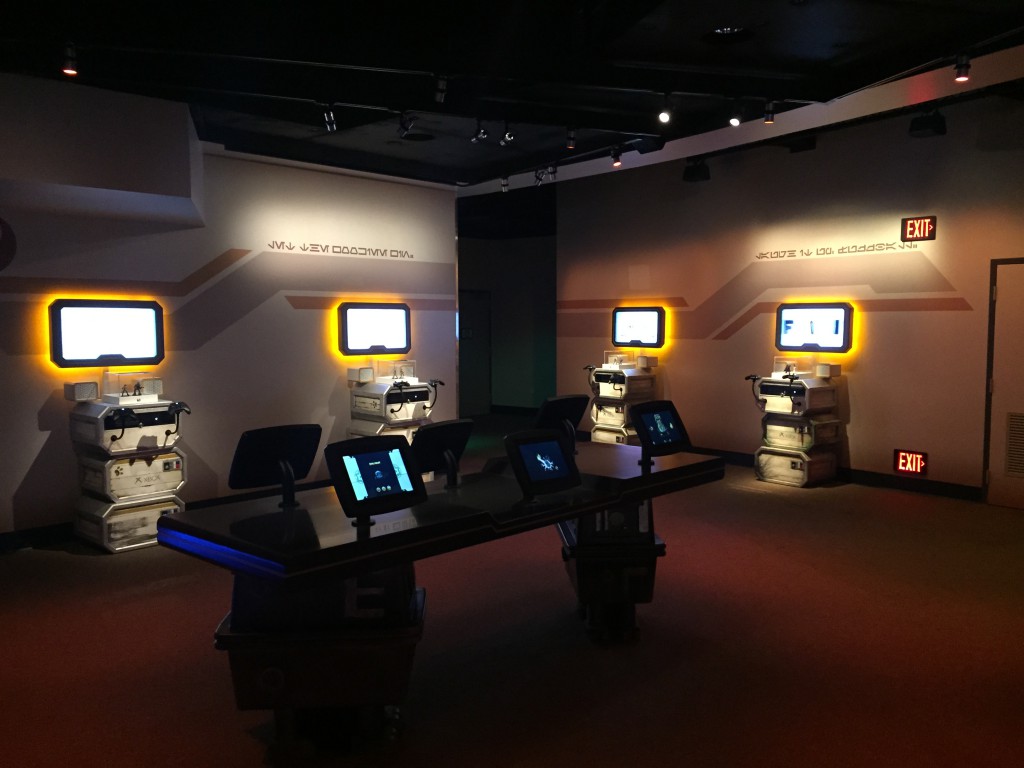 There is also a wide selection of merchandise available including D-Tech custom phone cases, featuring 90 different pieces of artwork. The store also features vehicles, costumes, play sets, Alex and Ani bracelets, Dooney and Bourke handbags, Medal of Yavin replica, and 12 inch Kenner action figures. We also got a sneak peek at the Playmation Force Push glove which will be released next year.

There is a new destination for your Starspeeder 1000; the planet of Jakku. As part of Season of the Force, each guest who experiences Star Tours will see new scenes inspired by Star Wars: The Force Awakens.

Space Mountain is transformed into Hyperspace Mountain as part of the promotion. Admiral Ackbar tells us that we are on a mission to Jakku to intercept a Star Destroyer. We soon realize that it’s a trap as we find ourselves in the midst of a X-Wing battle.

Featuring new projections, special effects, and a new soundtrack recorded by the London Symphony Orchestra, this overlay has been quite popular.

Star Wars: Path of the Jedi

At the Tomorrowland Theater, guests can experience Star Wars: Path of the Jedi, a 2D experience with limited in-theater effects that features clips from throughout the Star Wars saga. It also includes some previously released clips from Star Wars: The Force Awakens. The Tomorrowland Terrace has been transformed into the Galactic Grill featuring both light side and dark side options.

For breakfast, guests may enjoy a blue corn Darth Tamale, with scrambled eggs and chorizo, red chili sauce and tomatillo. For lunch and dinner, the First Order Specialty Burger is a patty of angus beef and chorizo, topped with fried cherry peppers and spicy-lime aioli on a dark bun.

There are also premium items such as the BB-8 sipper cup and the TIE Fighter popcorn bucket.

Red Rocket’s Pizza Port in Tomorrowland also gets in on the fun with items such as the Naboo Salad and Endor pasta.