The introduction of computers and digital technology for use in storytelling continues to evolve and become increasingly popular. In the recent presentation at the Walt Disney Family Museum, animation historian Tom Sito walked the audience through the historical timeline of computing technology, incorporating technology into films, and the continued digital revolution in filmmaking today.

Chair and Professor of the John C. Hench Division of Animation and Digital Arts at the School of Cinematic Arts (USC), Tom Sito, has over 40 years of experience in animation, 8 of which were spent at the Walt Disney Animation Studios, where he was considered to be a key figure during the Disney Renaissance. Sito’s screen credits include Who Framed Roger Rabbit, Beauty and the Beast, The Lion King, and The Little Mermaid.

At the start of the presentation, Tom reminisced on an important time of change for the use of computers in film. The early 90’s saw the release of Terminator 2, Jurassic Park, and the first full-length computer animated film in 1995 – Pixar Animation Studio’sToy Story. As most are aware, the use of computers in film date back further than the 90’s, but “how far back?” was the question.

What was the first film to use digital images?

To the surprise of most, the opening sequence to Hitchcock’s Vertigo (1958) is credited for the first use of computer-generated graphics.

The use of electronic media actually predates World War II. After Bill Hewlett and Dave Packard graduated from Stanford University in 1934, the two had their first official meeting and opened a business in a garage in Palo Alto, CA in 1937. Hewlett-Packard’s first product was an audio oscillator and one of Hewlett-Packard’s first paying customers purchased eight oscillators to test for his Studio’s own innovation. Walt Disney’s purchase of the eight oscillators was in effort to develop Fantasound, a stereophonic sound experience to support the Studio’s upcoming release of Fantasia. As another example of just how forward thinking Walt Disney was, Tom Sito shared how Walt wrote about the concept of television in 1940.

Newer and better technologies continued to be developed as the world was in the middle of World War II. American engineer, Vannevar Bush, who is also known for his work on analog computers, lead a system of government funded innovation to help win the war. In 1956, the first digital image of a human being is believed to have been created. Due to the popularity with the G.I.’s during World War II, that digital image was of a pin-up girl. In 1958, a large system of computers and networking was developed for instant communication during the Cold War, this technology was called Project SAGE.

On the animation side, John Randolph Bray, a pivotal figure in the development and organization in the animation industry, with the help of the Bray Studios, provided the animated military training films beginning in World War I. The Walt Disney Studios also remained very involved in the technical development during and after the war. The Walt Disney Studios made films for every branch of the U.S. military and government during World War II and continued to develop films to educate on space, innovation, and publicity.

It was in 1963 that Nebraskan, Ivan Sutherland, wrote one of the most influential computer programs called Sketchpad, which allowed the user to draw on the computer. Sutherland contributed many different ideas for Computer Graphics and Computer Interaction and introduced concepts for 3D computer modeling, visual simulations, computer aided design (CAD), and virtual reality. A number of technical resources from the Pixar Animation Studios studied under Sutherland, including President and Founder of Pixar Animation Studios, Ed Catmull.

One of the earliest digital computer video games, Spacewar!, was released in 1962 by Steve “Slug” Russell, Martin “Shag” Graetz, and Wayne Witanen. This two-player game was recognized as one of the top ten most important video games of all time in 2007 by The New York Times.

Short film, Hummingbird, was released by Charles A. Csuri in 1968 and explored the concept of object transformation and morphing technology:

Peter Foldes directed Hunger in 1974, one of the first computer animated shorts about greed and gluttony and produced by the National Film Board of Canada:

Moving ahead to 1980, Pacific Data Images (PDI) was founded in Sunnyvale, CA and was the oldest computer animation studio prior to being acquired by DreamWorks Animation SKG in 2000. Pacific Data Images played a big role in the development of performance capture animation. In 1988, PDI collaborated with Jim Henson to develop a digitally animated muppet whose actions could be recorded in real time by tracking a puppeteer’s movement of a motion-capture device called Waldo. This computer animated muppet is Waldo C. Graphic and premiered on The Jim Henson Hour in 1989. Waldo, the spirit of 3D, can still be seen in Muppet*Vision 3D at Disney Parks and Resorts.

The concept of motion-capture is inspired a lot by the technology of audio animatronics: real time recording of movement and animation for audio animatronic shows. In the following video, Walt Disney shares with us how he and his Imagineers were leveraging this technology for the creation of their classic attraction, Walt Disney’s Carousel of Progress:

Tom Sito continued through the evolution of digital technology and it’s use in film by highlighting key scenes. Including Walt Disney Animation Studios’ incredible backdrop for the ballroom scene in Beauty and the Beast in 1991:

The amazing presentation of the development of the Ice Castle in Elsa’s “Let It Go” from Frozen: 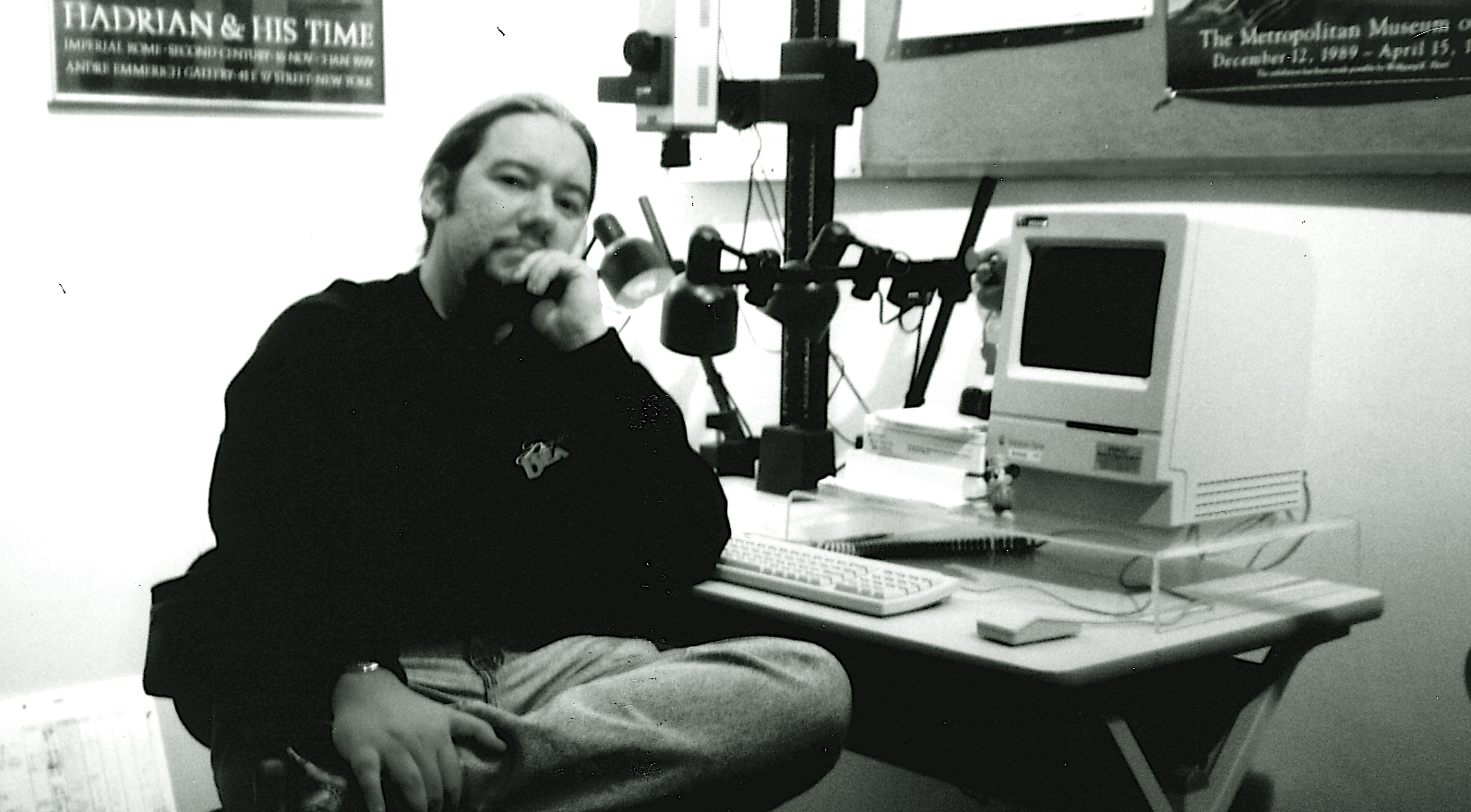 Image of Tom Sito during Aladdin production in 1992 using a Macintosh. (From http://flipanimation.blogspot.com/2013/03/tom-sitos-history-of-computer-animation.html)

Sito closed in saying that Scientists, Engineers, Military Men, and Walt Disney played an important role and worked together to help make our modern media.

What is the future of the visual effects employees with the new technologies?

Student attending filmmaking school with other students who want to use more classic methods of filmmaking asked if they can mix the two.

Does the need for information “now” hurt the creative process?

Is the Tom Sito book available in digital and/or interactive format?

How is technology helping us tell the story differently?

What is the future of technology in film?