The History and Travels of Duffy the Disney Bear

Today marks the 33rd anniversary of Tokyo Disneyland and the Tokyo Disney Resort. It seems hard to believe that it’s been that long, but the park remains a somewhat elusive conquest for many Disney travelers that those of us stuck stateside just can’t get enough of. Appropriately, the Tokyo Disney Resort it also the home to a world traveler in his own right: Duffy the Disney Bear. 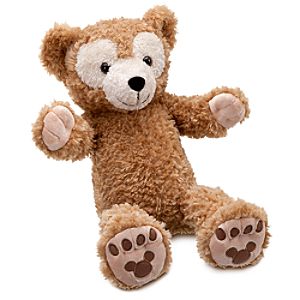 The cuddly teddy bear we all know as Duffy originally began life in 2002 as a plush bear simply named Disney Bear. Created as a marketing tool to promote the opening of Walt Disney World’s newest toy store in Downtown Disney, Once Upon a Toy, Disney Bear was a store exclusive. Walt Disney World executives hoped that Disney Bear’s exclusivity would drive foot traffic to Once Upon a Toy and increase sales. To aid Disney Bear’s popularity, he was offered in a variety of colors (pink, lavender, teal, cream and tan) and sizes. He was also given a specific backstory which could be found on Disney Bear’s ear tag. The original story began after a fun day at the Magic Kingdom…..

Despite the different attempts to make Disney Bear look unique and attractive to buyers, Disney Bear failed to resonant with Disney fans. After several unsuccessful redesigns and a Teddy Bear event at Epcot, Disney Bear was all but forgotten by US buyers. In 2004, it would have been difficult to find a guest familiar with Disney Bear. It was around this same time that executives from the Oriental Land Company (OCL), the owners and executives of Tokyo Disney Resort, adopted Disney Bear as a new park character. Even though Disney Bear did poorly with American audiences, OCL felt Disney Bear would test well in the Tokyo market since the culture already had a love and affinity for teddy bears. OCL used the original bear design, size and story. The only difference was Disney bear only was offered in the tan/cream color. Disney Bear was sold exclusively at Tokyo Disney Sea in the American Waterfront section.

Disney Bear was met with a lukewarm reception by Tokyo Disney park goers. Surprisingly, this did not dampen OCL’s enthusiasm — they knew Disney Bear was a great merchandising idea. The key was to success was finding out the best way to market the teddy bear; a feat that was proving very difficult to achieve.

Only a year later in 2005, Disney Bear was relaunched with a brand new name and detailed backstory, both of which complimented his new American Waterfront, Cape Cod home within Tokyo Disney Seas. Disney Bear was now known as Duffy the Disney Bear. He still came in three different sizes, was offered in only the popular tan/cream color, and looked very similar to the original Disney Bear design with his hidden Mickey’s. Duffy the Disney Bear still had an abbreviated story located on his ear tag but his detailed creation story was available separately as a small hard covered book. Instead of just featuring Mickey Mouse, Duffy Bear’s creation story featured many favorite Disney characters. OCL created a character that fit seamlessly within the Disney universe.

Duffy the Disney Bear was finally a success! Park guests were lining up to purchase their own Duffy Bear as well as any additional products. Soon, OCL created limited edition Duffy the Disney Bear events that featured very exclusive (and adorably detailed) outfits, human foods and merchandise (stickers, plates, cups and other paper products). Some of the events held were called “Sweet Duffy” (featured during February, the month of Valentine’s Day), “Cape Cod Seasons” (cute outfits to match the seasons of Cape Cod), and “Hello from Cape Cod.”

Duffy the Disney Bear could not be stopped. His popularity continued to increase yearly. By 2010, a costumed character meet and greet was added to his Cape Code home at American Waterfront, a little Duffy Bear café opened serving the most charming and delicious looking treats and fans began to carry and document their adventures with their Duffy Bear. Recognizing Duffy the Disney Bear’s upward momentum, OCL released Duffy’s new friend – Shellie May (more about her in another blog post). She too came in multiple sizes, had the same outwards design and Hidden Mickey’s as Duffy and had additional merchandise for purchase. But what truly made Shellie May so different and charming was her beautiful soft pink fur, blue eyes, and bow.

By October 14, 2010 Duffy the Disney Bear got his passport stamped, traveled overseas and took up residence within Disneyland and Walt Disney World. While the character no longer does meet and greets, his merchandise and customers are still widely available in both resorts.

I hope you enjoyed this look into the evolution of everyone’s favorite Disney Bear. Personally, I love Duffy and I look forward to writing more posts that look into his (and Shellie May’s) presence at the US parks, their unique books and other fun bits of teddy bear trivia. Also, a very special “Happy Birthday” to the Tokyo Disney Resort and thanks for seeing the potential in this adorable bear.