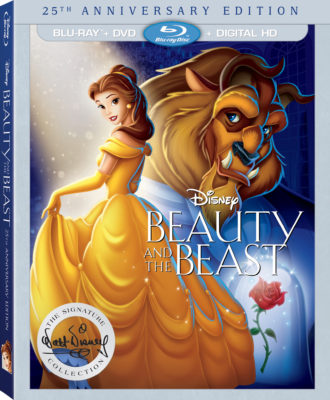 For twenty-five years, Disney’s animated masterpiece Beauty and the Beast has been enchanting audiences with its spellbinding tale of inner beauty. In celebration of its silver anniversary, Disney is re-releasing one of their best-animated classics as the second title in The Walt Disney Signature Collection. Starting with Snow White and the Seven Dwarfs earlier this year, the Signature Collection presents the studios’ most iconic animated films, which follow in the legacy of Walt Disney’s first animated feature.

A cursed prince, an enchanted castle, and a beautiful outcast set the scene for Disney’s Beauty and the Beast. When Belle finds herself a prisoner in the Beast’s enchanted castle, she unintentionally warms the heart of the cold prince trapped within. But the prince must earn her love in return to break the curse, a daunting task, “For who could ever learn to love a beast?”

With The Walt Disney Signature Collection, Disney has ditched DVD-only releases. This means that if you’re looking to own the film on disc, this Blu-Ray/DVD/Digital HD combo pack is your one and only option. Ever a surprise, both discs have less to offer than the digital HD copy, but more on that under the Bonus Features section.

Using the exact same transfer as the 2010 Diamond Edition, Beauty and the Beast looks exactly the same as it did six years ago. This isn’t necessarily a bad thing, as the previous release left little to improve upon in terms of picture quality. Fine details in the backgrounds are present and colors are bright and vivid. And while the color correction may be questionable, the film looks pristine in this format.

The DVD only contains the Theatrical Version, where line detail is noticeably blurred in comparison to the Blu-Ray presentation. The colors also feel less vibrant, but in some cases over brightened.

The primary track on Blu-Ray is a 7.1 DTS-HDMA mix that is robust and allows the score and sound effects to be isolated in the rear speakers. Like the video presentation, this is also an identical clone from the Diamond Edition. Other audio options include French and Spanish 5.1.

The DVD features English, French and Spanish in 5.1. This mix pleases as well and utilizes the full sound field to immerse you in the film. In comparison to the 7.1 mix, it sounds slightly less rich, but not by much.

Here’s where things get weird. Disney has assembled some new bonus features for this release, but the only repeat from previous releases is the audio commentary. What’s odd is that nearly every bonus feature ever released before is included with the Digital HD copy that comes with this release. This is a real challenge for anyone without high speed internet as it will be a chore to watch the nearly five hours of content not on a disc, only available through streaming. Here’s what’s included in the Blu-Ray.

The DVD doesn’t have a single bonus feature on it.

For a comprehensive list of all of the bonus features included with the digital copy, check out our Digital Review of Beauty and the Beast.

Beauty and the Beast is housed in a standard Blu-Ray case with disc holders on both sides of the interior. The artwork is somewhat similar to that of Snow White’s Signature Edition in that it features the two lead characters, more-or-less back-to-back. However, the matte finish slipcover of the previous release pales in comparison to the high gloss shimmer effects on this one. Inserts include the Digital Copy code, which is sealed in a booklet and on the back of a card for security reasons, and a flier for Disney Movie Club.

The menu features scenes from the film depicted in the stained glass window as the camera pans over close-up sections. Both discs open with ads for Disney Movies Anywhere, Moana, and Finding Dory. Clicking “Sneak Peeks” from the main menu plays additional ads for Beauty and the Beast (2017), The BFG, Disney Movie Rewards, Dream Big Princess, and Elena of Avalor before repeating the previews that automatically play.

Beauty and the Beast is one of the best-animated films of all time and belongs in the collection of every Disney fan. If you already own the Diamond Edition release, Disney hasn’t given you much of a reason to purchase it again. Unless you’re looking at this for the digital copy, which is surprisingly the most definitive release ever made available. But if you’ve never owned it before, this release is sure to delight.