Every time I think of Ghost Rider, I just can’t get Nicolas Cage and those two awful movies he starred in out of my head. It’s just so hard to think of this character without seeing Nicolas Cage hamming it up as Johnny Blaze. When I saw commercials for the latest season of Agents of Shield, I was intrigued by the Ghost Rider story line, but I didn’t commit to the show, because of Nicolas Cage.

Having read Ghost Rider #1, I now appreciate how much more there is to the character of the rider than what was put on screen a few years back. This comic series features Robbie Reyes who was resurrected by the spirit of his evil Uncle Eli to take the souls of the wicked in his muscle/demon car. 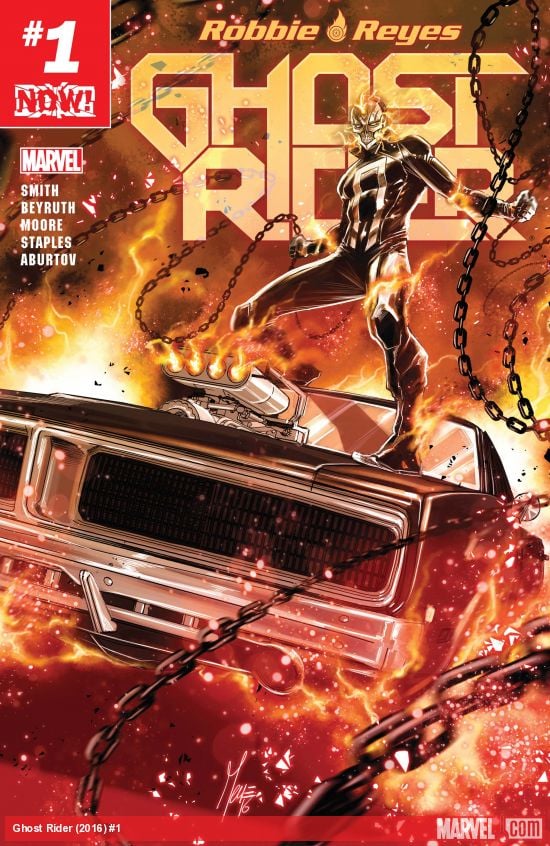 Many new comic series start off with an ‘origin’ story. I would say this first issue is more akin to a ‘month after’ story. This is how Robbie is dealing with his life as the Ghost Rider and we get to see how he balances it while trying to care for his younger brother. But Robbie is not the only character in this story. “We have a Hulk” to quote Robert Downey Jr. in The Avengers.

Amadeus Cho, the new Hulk is working at an archaeological site at the beach when an unknown purple blob is discovered. It results in Cho as Hulk investigating the blob and then fighting the blob which ends up escaping.

The story cuts between the two separate storylines of Cho and Reyes. For once the life of the Ghost Rider is a clear story with no overacting and an arch that is the typical standard fair for comic books. Reyes is only doing what he is doing so he can look after his disabled brother. This theme has been found throughout many comics, and stories of all kinds for hundreds of years.

We know Gabe Reyes is disabled because in the opening panel we see books in the background of Robbie’s garage that have titles involving the words like ‘developmental disability’ in them. The pressure that Robbie faces caring for his younger brother is obvious to the reader. Artist Danilo Beyruth did a great service to the reader by filling the scenes with images like the books that help tell the backstory of how and why Robbie and Gabe are where they are. Ghost Rider #1 is an excellent example of how you can tell a more complex story with fewer words.

Even in the scenes where Reyes becomes the rider and goes after a thug who kicked his car, you feel for his plight. He made a deal to protect his brother, and the devilish spirit of his Uncle Eli, who brought him back from the dead, is talking and goading him along. I like Ghost Rider, because I like Robbie Reyes.

The Amadeus Cho portion of the book is an interesting contrast to Reyes’ story. Here we see a very different functioning Hulk, one that is not just a mindless wrecking machine. Rather, he is an intelligent thoughtful brute. The purple blob that is found turns out to be some creature that when it comes in contact with you, can duplicate your abilities. Its escape no doubt sets up the conflict for the series that will bring Reyes and Cho together.

What is the lesson that we can take away from Ghost Rider #1? Appearances can be deceiving. No matter who you are or what you are, the outside veneer is not the whole you. Robbie Reyes is a wonderful kid who is doing his best to look after his younger brother. Amadeus Cho is a scientist that can become a monster.

Making Cho’s Hulk a smart communicative character sets the green monster apart from Bruce Banner’s version. Beyruth again sets this standard with his artwork in choosing to soften the monster version of Hulk and make him a giant intelligent green man, who can also fight.

I feel for Reyes though. Hulk is the comedy, Reyes is the heart of the story. How much would anyone do for their loved ones? Reyes is a good kid, who does some bad things, so that he can be a good kid. He’s complicated, and whereas Nicolas Cage portrayed his Johnny Blaze Ghost Rider as a loner, Robbie Reyes is the everyman, and that makes you want to learn more about him.

The inclusion of the new Wolverine, Laura Kinney, is an interesting choice. I wonder how she will be used in the series, because I don’t think she is needed. But then again I am not looking at the whole story arch. Time will tell about Wolverine’s contribution to Ghost Rider.