Even though rumors were that testing was taking place at both Blizzard Beach and Typhoon Lagoon, it was only at Blizzard Beach for the first two days with only one slide being tested on the system. The idea of a “virtual queue” has been around longer than FastPass, dating back to Universal Studios Tour in Hollywood, CS with boarding pass for the World Famous Studio Tour (ask for Babs) where guest would be given “return times” when entering the park to encourage guests to experience other shows and attractions in the park as opposed to waiting for hours in line. Now as Universal Orlando sets to opening Volcano Bay Water Theme Park in late may they are introducing another concept, that has been floating around small parks for years but this will be the first large scale use in the United States, TapuTapu a wearable pager of sorts that will let guests know when it is time to head to which ever water slide with no wait. Well, the “virtual queue” testing at Blizzard Beach is not much more than a repeat of Disney FastPass testing from 1999. Guests visit a “virtual queue” distribution table as the walk up the mountain and are given a return time to Summit Plummet later in the day. 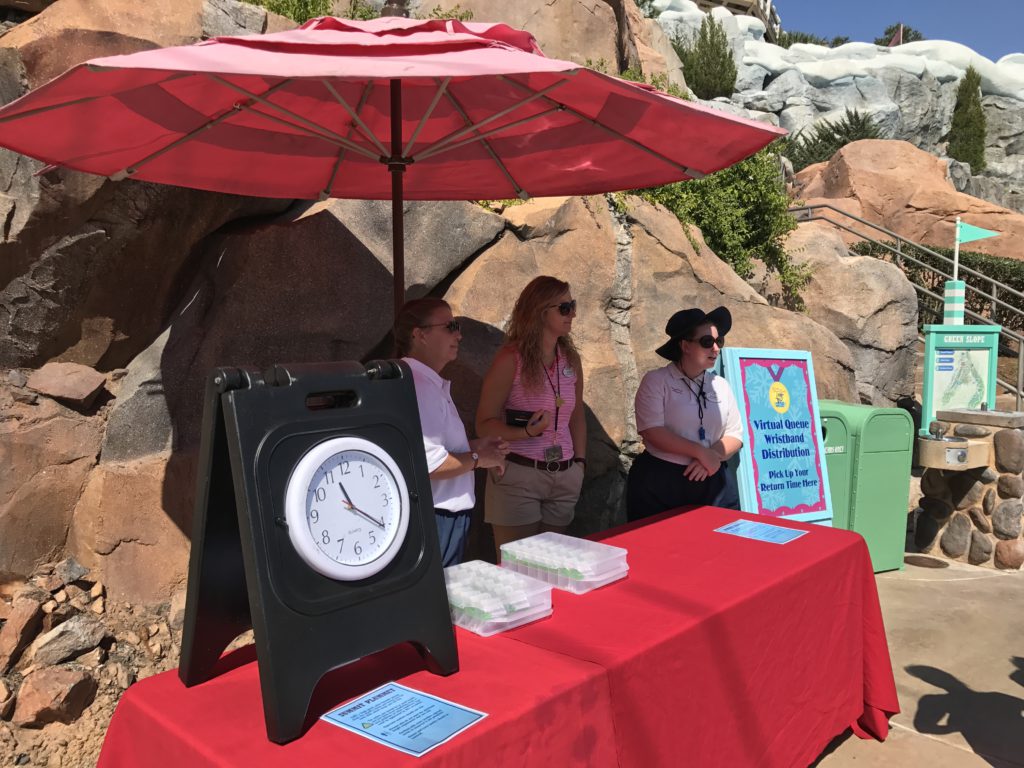 The wristband, much like the initial testing of Disney Photopass at the Water Parks is just a hard plastic card on a rubber band with the attraction name, return time window, and legal jargon on the back. When the Return Time window is up, at the entrance of the attraction, a Cast Member checks the time and sends you along a green tape line in between the stand-by line for Summit Plummet and normal line Slush Gusher. The queue for these two slides are side by side so adding a “virtual queue” return line down the middle becomes a bit confusing and crowded. Once guests get to the stairs to the top of Summit Plummet another Cast Member collects the wristband and directs them up to the load platform. Guests in the stand-by queue remain under the covered walkway to the stairs and are sent in between “virtual queue” guests. Virtual Queue and Stand By Guests for Summit Plummet

This being a early test of this system, it was going very smoothly and I could see it moving to a next level in the future. However, the biggest challenge was not calling it FastPass because it is basically what I experienced at Disney’s Animal Kingdom and Disneyland in 1999 where they had the start of how it would work without doing any work to the queues yet. With waits only a few minutes for Summit Plummet there was no real benefit at this time but I could see in the middle of summer where that wait can be an hour how much this could help. Some of the questions I had was what happens when it is on multiple slides, will they give different times and will you have three wristbands at a time? I hope this could be the start of planning for MagicBand 3 with a way to alert you it is a return time for attractions but for now we will just have to see how this test goes for the water parks. The current test of this virtual queue sytem is set to run through April 7th.