Starlight Foundation: Changing Lives Through the Magic of Star Wars 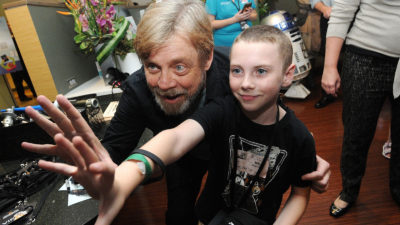 During the 40th Anniversary panel at Star Wars Celebration, Mark Hamill was asked how Luke Skywalker has affected people. He shared a recent anecdote about visiting Orlando’s childrens hospital and meeting a young boy who had lost his arm. He told Mark that he wasn’t worried about it anymore because Luke Skywalker lost his arm and it didn’t ruin his life. It’s incredible the way these Star Wars characters continue to inspire new generations of kids in different and unforeseen ways. 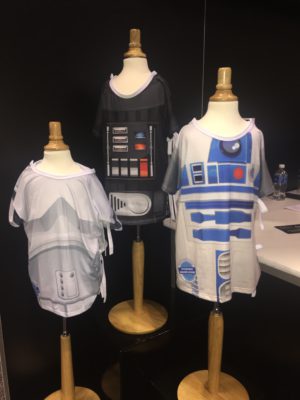 Starlight Childrens Foundation is a group that was recently selected to be part of the Star Wars Force for Change campaign and they were at Star Wars Celebration to share how they are making hospitals a happier place for kids with illnesses that require them to stay in the hospital for extended periods of time. They had two amazing ways of using Star Wars to help kids feel more comfortable and less trapped by their surroundings.

The first is a line of hospital gowns made of soft fabric and that wrap completely around, not leaving their backsides exposed. But these aren’t just generic gowns, they are themed to Star Wars characters and kids can choose from options like R2-D2, Stormtroopers, Chewbacca, and more. Parents are able to arrange for their kids to get a gown if they’re in an extended hospital stay, but fans can also help provide them to families in need for as little as a $25 donation. 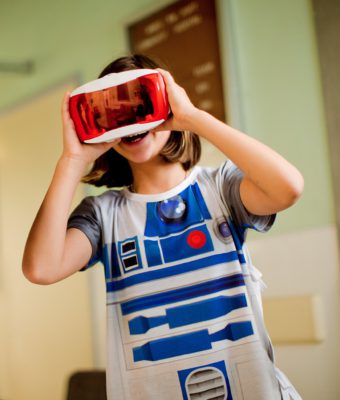 The other way Starlight Childrens Foundation is changing the way lengthy hospital stays affect kids livelihoods is through new virtual reality technology that is being rolled out to hospitals across America. With a pair of goggles the can travel between bedsides, kids will be able to choose from multiple locations in the Star Wars universe and multiple characters to interact with. On display at the convention was a tour of the Millennium Falcon and an encounter with BB-8. These glasses help transport kids away from their worries to a galaxy far, far away and fans were lining up to meet their favorite rolling droid in virtual form at Star Wars Celebration.

I can only imagine what these special touches must mean to the kids living in hospitals while they fight to recover. Now Star Wars fans like you can become a Force for Change by helping the Starlight Childrens Foundation. You can donate to them directly on their website and help bring the magic of Star Wars to these younglings in need, or you can also donate to the Force for Change through Omaze, where you can win prizes for different donation levels and even win extra contests as well. Some of the contests include a visit to the set of the Han Solo film or an overnight stay at Skywalker Ranch. Force for Change donations currently benefit both Unicef and the Starlight Foundation.