The official opening of Guardians of the Galaxy—Mission: Breakout is just about a month away. On April 25th, Laughing Place was invited to join a hard hat tour of the new attraction — the first based on a Marvel property in a domestic Disney theme park. On hand for the event were representatives from Walt Disney Imagineering, the Disneyland Resort, and Marvel. While we were not allowed to see everything that will be offered in the experience (or to take photos or video), we were given a full tour and explanation of what to expect. Readers should be aware that there are spoilers ahead. 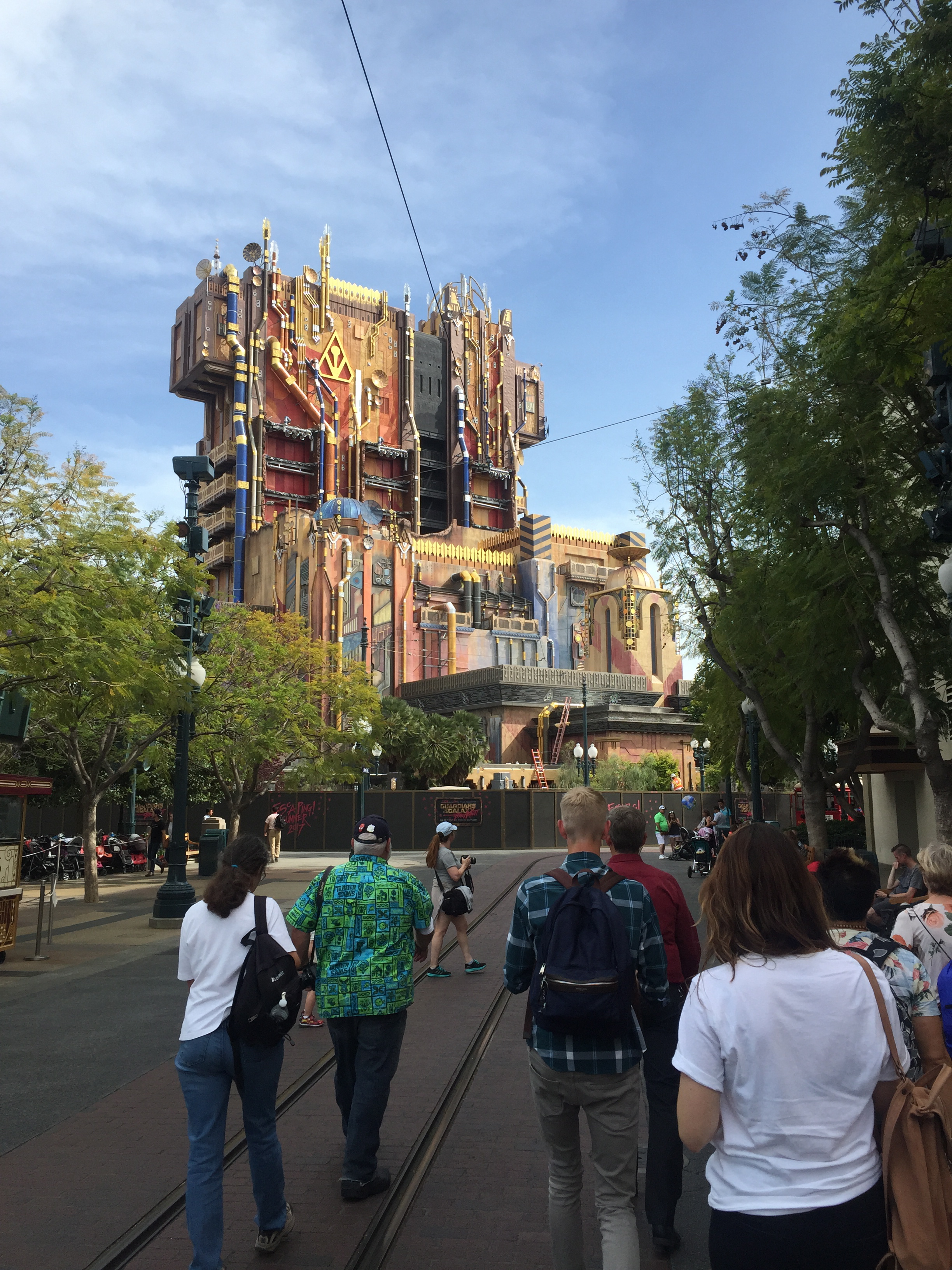 The approach to the Collector’s Fortress from Hollywood Boulevard

The GotGMB experience will begin as guests approach the Collector’s Fortress. According to the designers, this is intended to represent a structure placed in the Hollywood section of Disney California Adventure, as an enticement to visiting tourists. Taneleer Tivan, the Collector, is the ultimate fan boy, and he wants to now show off his premiere collection. 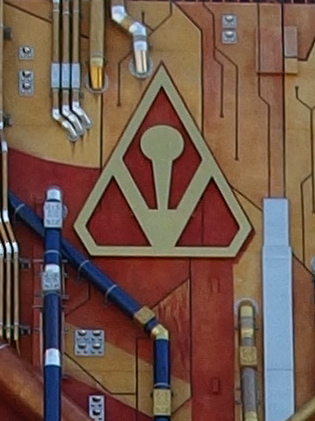 The exterior of the Collector’s Fortress was described as nothing you have ever seen before. Prominent on the façade is the logo of the Collector, with a downward pointing arrow, which symbolizes items being brought from space down to the Collector. Pipes are a prominent feature of the building’s architecture, and are an important visual link to the plot. The pipes show that the building utilizes a lot of energy, generated on-site and used to power the many cases holding live specimens. The exterior will pulsate and glow at night.

The Collector’s artifacts are found not only inside the building, but outside as well. The exterior queue line will showcase many of his exotic plants in an area called Tivan’s Oasis (and not, as one member of the team joked, the Gardens of the Galaxy). Guests will also be able to hear some of the audio artifacts that have been placed here.

A word about these artifacts: they not only showcase the Collector’s vast interests but will also provide a treasure hunt of sorts for Marvel fans. While many of these “Easter Eggs” will be evident only to the most dedicated fan, even guests unacquainted with the Marvel universe will be able to enjoy the ambience that leads to the experience inside. 14 cases are suspended above the main exhibit room (c. DISNEY)

Upon entering the building, guests will see an eight-foot tall, gilded statue of the Collector himself. This figure towers over a room filled with glass cases, ranged along the walkways and even suspended from the ceiling. Those containing live specimens are kept secure by the locks powered by the building’s generator. 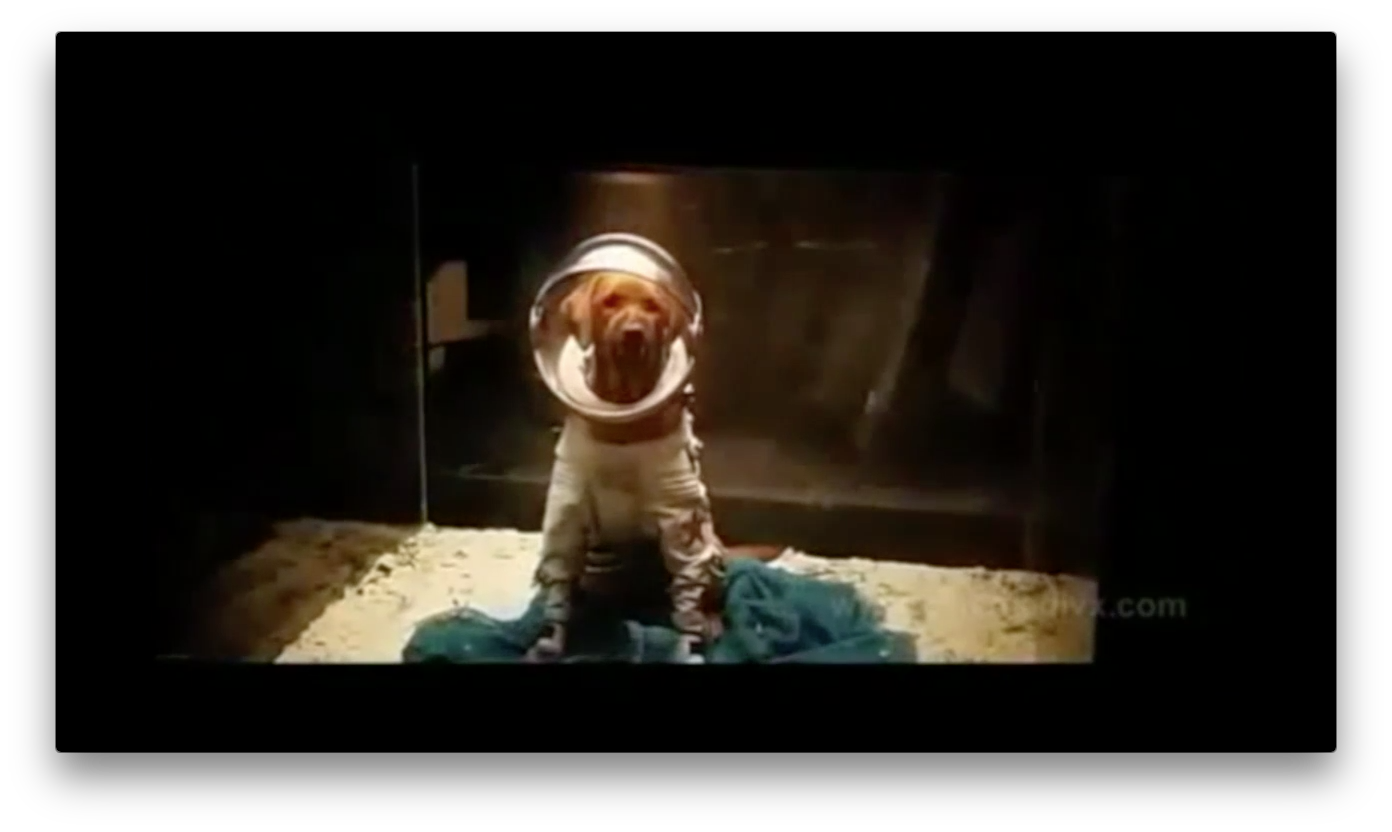 Cosmo the Space Dog, as seen in the first Guardians of the Galaxy

Most guests familiar with the film will be able to identify Cosmo, the space dog, in the second case from the left. Die hard fans will note that the first case holds the cocoon of Adam Warlock, briefly seen in the first Guardians of the Galaxy film.

Memorabilia in other cases is drawn from Marvel films, television properties, and comic books. The production team stated that over 2,200 artifacts will be on display throughout the entire attraction, and that they will be changed out on a regular basis. Prominent on opening day will be a number of Kree artifacts, familiar to viewers of Agents of S.H.I.E.L.D. The Chitauri staff carried by Loki in the Avengers, and an orb that held an Infinity Stone can be found in another case. On the right hand side is what appears to be a section of a bas-relief wall from the planet Morag, seen at the beginning of the first Guardians of the Galaxy. Given prominent placement in the center of the room is an 89P13 blaster, with a notation that it was taken from the Guardian’s “pet rodent” Rocket Raccoon.

At the far end of the exhibit space a large screen offers a video greeting. Guests will note that, while the Collector is quite confident that all is well, there have been a few jarring notes. Minor vandalism has taken place, and the Collector’s servants are furtively enlisting the guests to help them in some sort of plot to overthrow the Collector’s tyranny over them. Tivan’s servants are dressed in shades of purple and gray, reminiscent of clothing seen in the Nova Corps. Because they have been under constant surveillance by their stern master, they are cowed, but hopeful. Think of them as wily high school students who are about to put one over on an officious principal.

After viewing the main exhibit space, guests are ushered into Tivan’s private office, where he keeps smaller items of a more personal nature. There we learn that Rocket Raccoon has actually escaped, and we are enlisted to help him destroy the generator that is keeping the rest of the Guardians imprisoned.

The Guardians, imprisoned and suspended above the abyss

Their cases are suspended over an abyss, and the only way to release them is by cutting off power to the entire complex. To accomplish this, guests must make their way through the Maintenance Room, and to a gantry lift.

In the Maintenance Room there are already signs that things are awry. Some of the equipment appears to be malfunctioning. A white yeti-like creature can be spotted among the machinery. Guests board their gantries, and are immediately rushed straight to the top of the complex. There, they assist Rocket in destroying the generator. With the power knocked out, the gantry plunges, and guests are carried into one of six “vignettes,” or scenarios. The six scenarios are entitled: 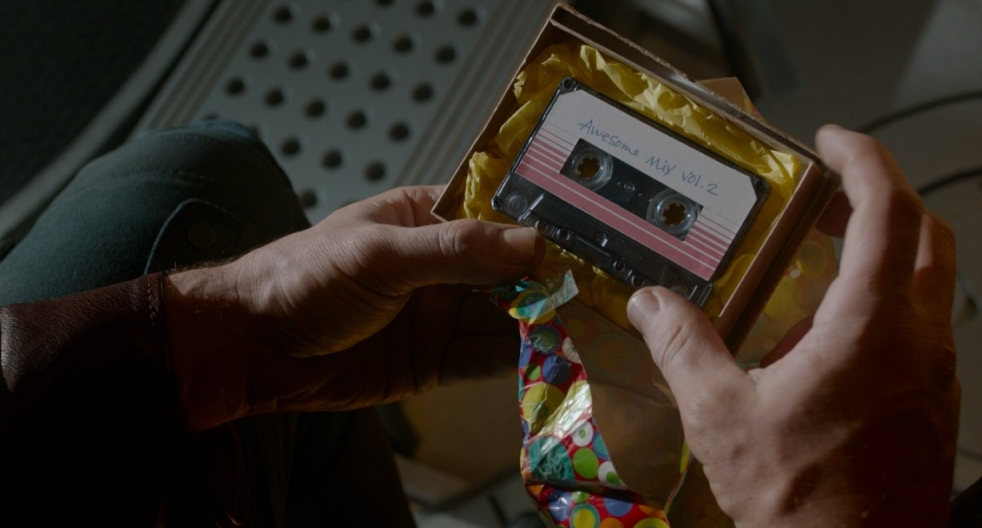 Awesome Mix Tape 2, as seen in the film

Music is an integral part of GotGMB. Just as the film used pop songs of the late sixties and seventies, the attraction will use songs to set a specific mood for each vignette. The six songs that will be used are as follows:

The experience will be slightly different each time a guest enters the tower. Not only are there six distinct “vignettes,” but also there will be variations within each. Upon surviving the experience guests make their way out through an exit hallway, where they will hear a sort of “greatest hits” of all that has come before.

Guests exit through the Collector’s Warehouse, specifically the shipping and receiving area. With the Fortress in full power failure, and any number of alien creatures on the loose, the servants of Tivan are taking advantage of the situation and selling off everything in sight. This will conclude the public tours of the Tivan Collection.

Readers familiar with this attraction in its original incarnation as the Twilight Zone Tower of Terror will note similarities in the sequence of events. Instead of the lobby-library-boiler room-elevator, guests will experience the display room-office-maintenance bay-gantry. A major change is in the way the attractions were paced. The Tower of Terror was based on a TV series in which baffling clues led to a twist ending. GotGMB is based on an action film, and will reflect this with a faster pace and more energy.

For Marvel fans, this will be both a delight and a challenge. The search for “Easter Eggs” will be complicated by the fact that they will be drawn from all aspects of the Marvel canon, and will be changed out as new properties are developed. For the average guest, however, there will be more than enough clues to create a memorable theme park experience. And for Disney fans, there is the promise that the Collector has not confined his search to the far reaches of the galaxy alone. In fact, there will be a number of artifacts drawn from the Disney theme parks themselves.

Familiar characters appearing in the attraction will include the Guardians of the Galaxy: Star-Lord, Gamora, Drax, Rocket Raccoon and Groot; as well as the Collector and Mantis, who will be introduced in the second GotG film.

While GotGMB draws from Marvel, it is not yet known if the attraction will contribute to the canon. There has been active speculation that a glimpse of the Collector’s Fortress can be seen in the trailer for the newest Thor feature, Ragnorak. When asked for comment on this, the GotGMB team only hinted that the plot for Ragnorak could explain a connection between the Collector and the Grand Master seen in the trailer. At least one entirely new character has been created for GotGMB. Apheta his described as a Krylorian female, and the director of operations for the Tivan Collection.

Guardians of the Galaxy—Mission: Breakout is scheduled to open to the public on May 27th. This will mark the launch of a Summer of Heroes at the Disneyland Resort. Other experiences will include super hero encounters with Groot, Black Widow, Captain America and Spiderman, a Guardians of the Galaxy Awesome Dance Off, and the Avengers Training Intiative with Black Widow and Hawkeye.