Ashley Eckstein: From Dreamer to Dream-maker Ashley has always dreamed big, and loved Disney. Her credits include both screen acting (“Muffy” on Disney Channel’s That’s So Raven) and voice acting roles. Perhaps Ashley is best known for originating the role of Ahsoka Tano in the animated series Star Wars: The Clone Wars. Over time, Ahsoka has become one of the most beloved characters in the Star Wars galaxy.

Young Ashley had dreamed big. But reality became even bigger than she had dared to dream. “If You Can Dream It, You Can Do It.”

Ashley overcame huge obstacles as she built Her Universe from scratch. In doing so, she gave fangirls around the world a voice, with fashions to show off their passions. Ashley has a huge heart for lifting others up, creating opportunities like this annual Fashion Show, and book publishing deals with Her Universe Press. The Her Universe website also features a ‘Fangirl of the Day.’

Her message is always positive: be yourself, “and leave here believing that the dreams that you wish can, and do, come true.” She speaks up against bullying and overcoming haters and criticism. Ashley is now writing a book for Disney about ‘how to make your dreams come true.’

Besides Star Wars, Ashley also loves Studio Ghibli films, cupcakes, and everything Disney (especially Alice in Wonderland). One of her favorite Alice quotes is “Why, sometimes I’ve believed as many as six impossible things before breakfast.” 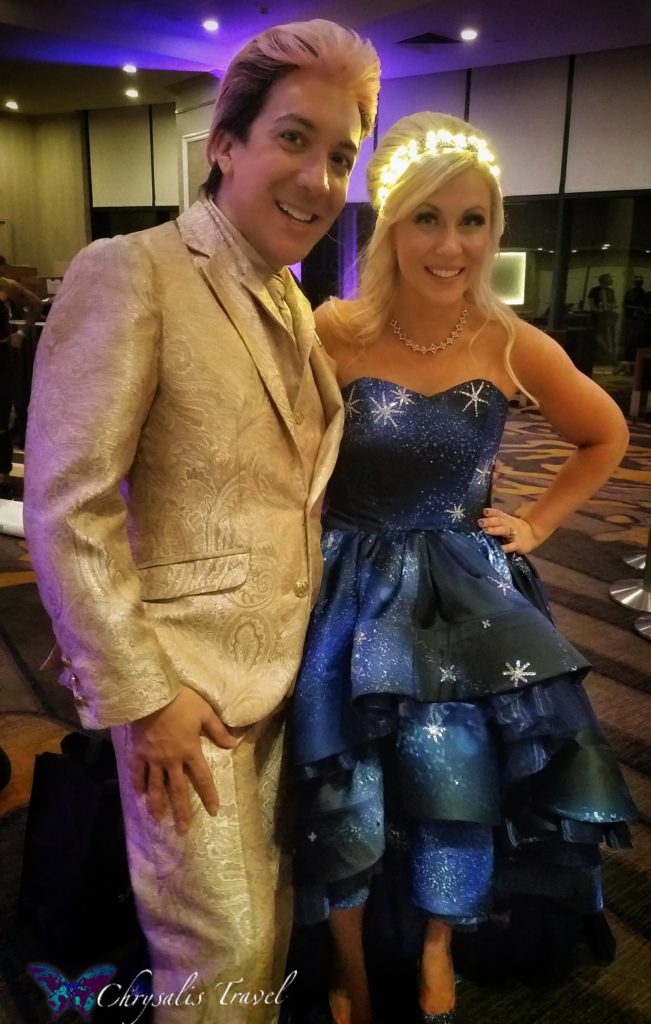 Once again, Ashley’s gown enchanted the audience. Created by the fabulous Andrew Maclaine (who has designed all of Ashley’s gowns since he won the Audience Choice Award in the first Her Universe Fashion Show), this gown went through a ‘transformation’ inspired by the Bibbidi-Bobbidi-Boo scene in Disney’s Cinderella.

Andrew had commented to Ashley – ‘I can make a dress in three days.’ Well, he had just a little over three days to create this custom gown.

“Wish Upon a Star,” was not meant to be Cinderella’s gown, but rather inspired by the ‘stars swirling in the night sky’ in that transformation scene. It was made with over 5,000 hand-beaded crystals on 55 yards of custom-printed fabric: 10 yards of satin, 15 yards of organza, 15 yards of tulle, and 15 yards of lining. Remember the Ahsoka Lego gown last year? It weighed 25 pounds. This year’s Princess gown is pretty close, weighing in at about 20 to 23 pounds, says Maclaine. Ashley has made many designers’ dreams come true. Andrew thinks of Ashley “like family.” He certainly is part of the Her Universe family. He reflects on how extraordinary it is in the fashion industry to have someone like Ashley, “using her platform to help others find success.” She proves that you can be a “supportive, good person and still be successful.”

However gorgeous, “Wish Upon a Star” was not the first concept for this year’s gown, remarks Andrew. He couldn’t say more, because the original idea could still become a future gown.

In the high-pressure realm of couture fashion, stakes are stacked against newcomers. Not so in the Her Universe Fashion Show. Contestants were encouraged to submit their design concepts online… no previous experience necessary. Just show off your fandom and creativity!

Hopefuls were also allowed to present their designs to a panel of industry professionals at an open portfolio review at Wonder-Con. Twenty-six finalists were named to create their designs.

Twenty-five talented designers saw their creations walk the runway at the Manchester Grand Hyatt on July 20, 2017. (Due to unforeseen circumstances, one finalist had to withdraw at the last minute). Inspirations drew from many different fandoms. Many had Disney roots.

Several gowns were themed around Disney’s Moana, Beauty and the Beast, Cinderella, and Lilo & Stitch. There were a couple Star Wars-inspired entries, including one Ahsoka Tano gown. Marvel was also represented, with Dr. Strange, and Groot from Guardians of the Galaxy. 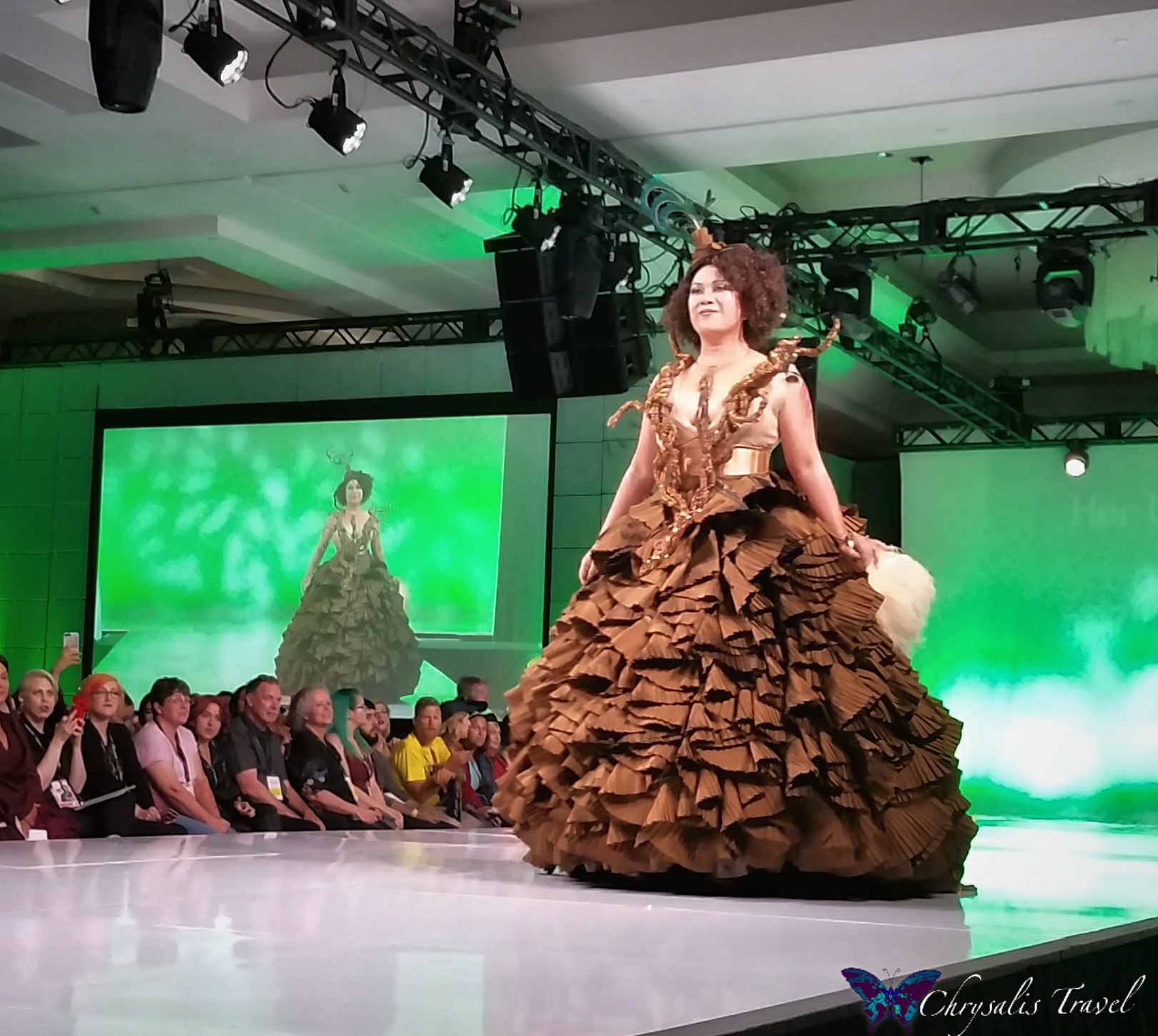 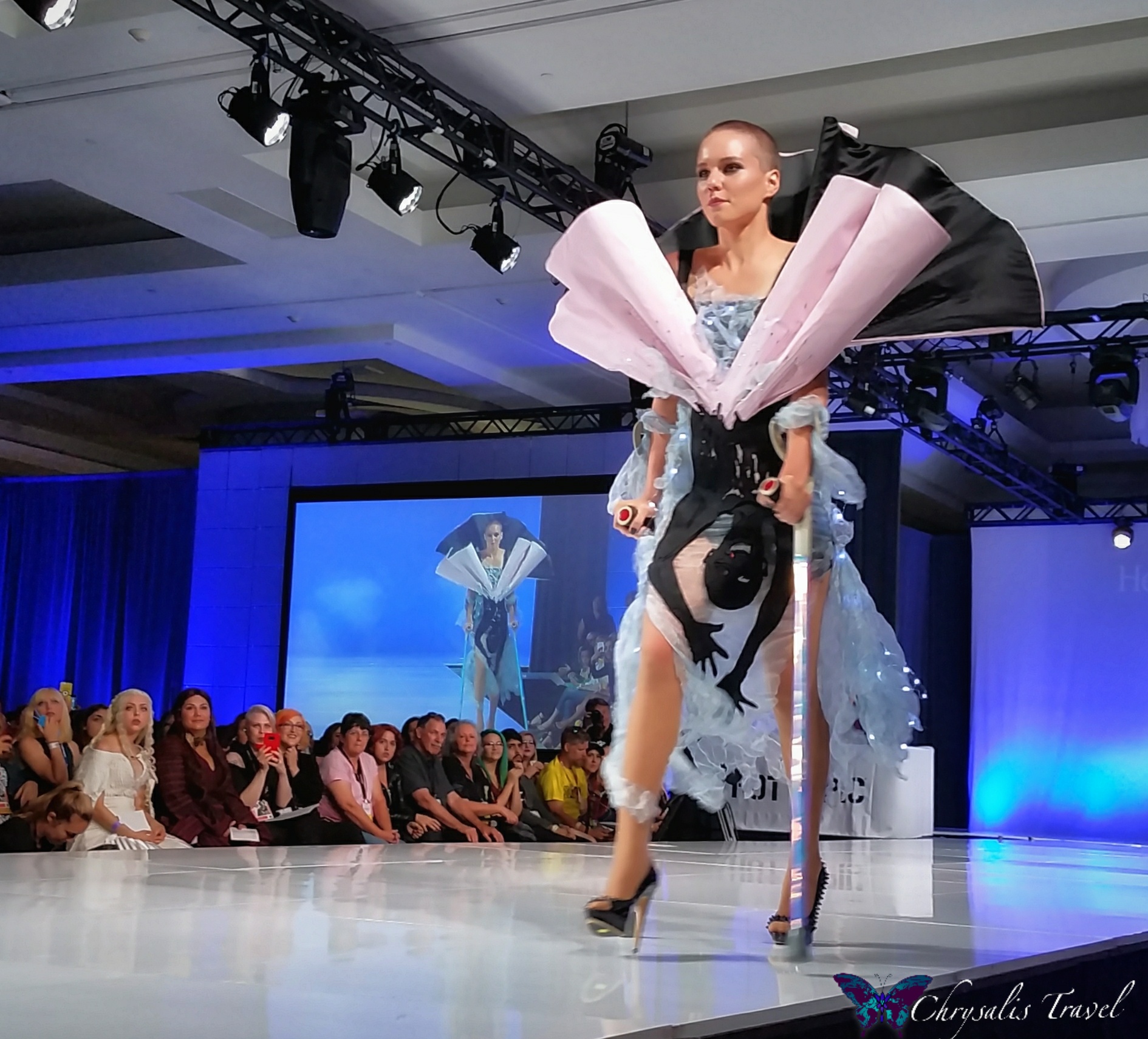 Here are all the contestants as they took the runway one last time.

Now that Her Universe and Hot Topic have joined forces, winners (for the first time) will design a complete fashion line with head-to-toe accessories. And this year’s theme – usually a closely guarded secret until Wonder-Con in the spring – was also announced: a Disney Princess-inspired collection.

BB-8 was invited on stage to bring out the results envelope.

For the first time, there was a tie for the Judge’s Winner. The Audience Choice winner was Congratulations to all the finalists who showed such heart and passion in creating their gowns this year! We look forward to the Disney Princess Her Universe line at Hot Topic!

Special thanks to Ashley Eckstein: for believing in your dreams, and making dreams come true for so many others.