Today was our first full day in Beijing and we got to see the major sites. Here is how Disney described the day.

More than any other of the world’s civilizations, China has perhaps come closes to establishing a heavenly kingdom on earth with the building of the Forbidden City, the largest palace complex ever constructed for its imperial rulers. For nearly five centuries, this labyrinth of gilded palaces, pavilions, lakes and gardens served as the political and cutural center for ancient dynasties and the modern Chinese republic. 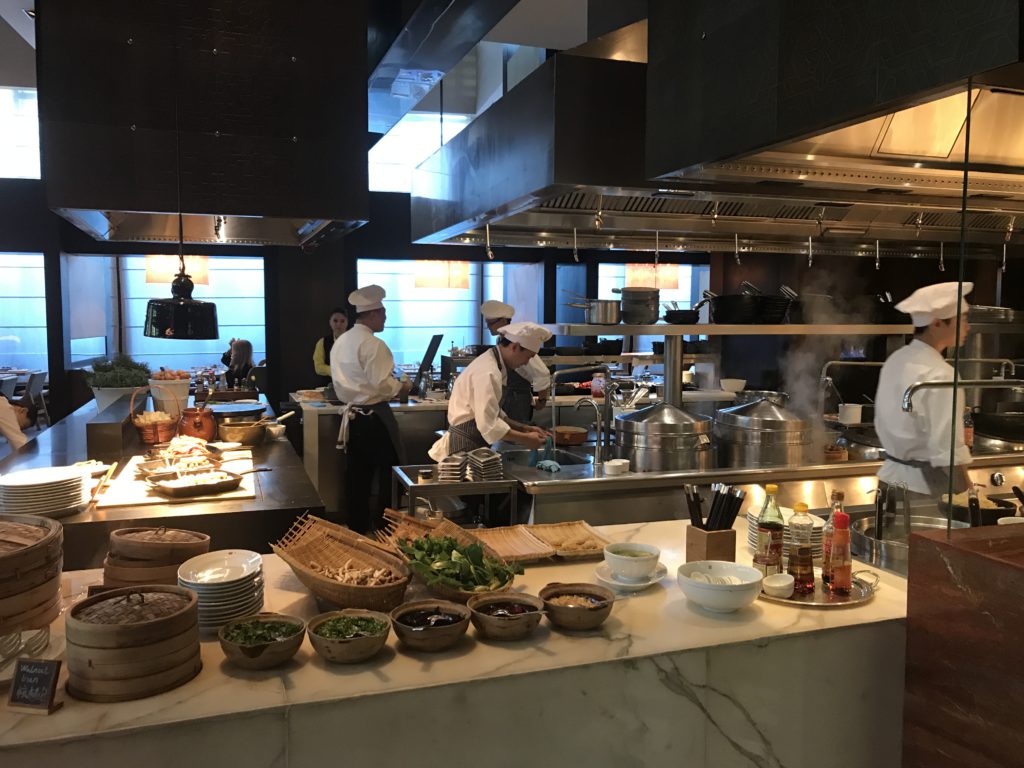 We started our day having breakfast at the hotel. This buffet was much more modern than the Peninsula, with its open-kitchen. This made it a bit more challenging to know what the options were, particularly since none of the food had labels. That being said, I did enjoy the chicken tenders and the watermelon juice.

We met our guides in the lobby and they handed us rechargable portable fans. This was our first clue that it was going to be a hot day. Apparently between the rain and the polution, blue skies are rare in Beijing, but we were blessed with fantastic weather. But it also meant no cloud cover. 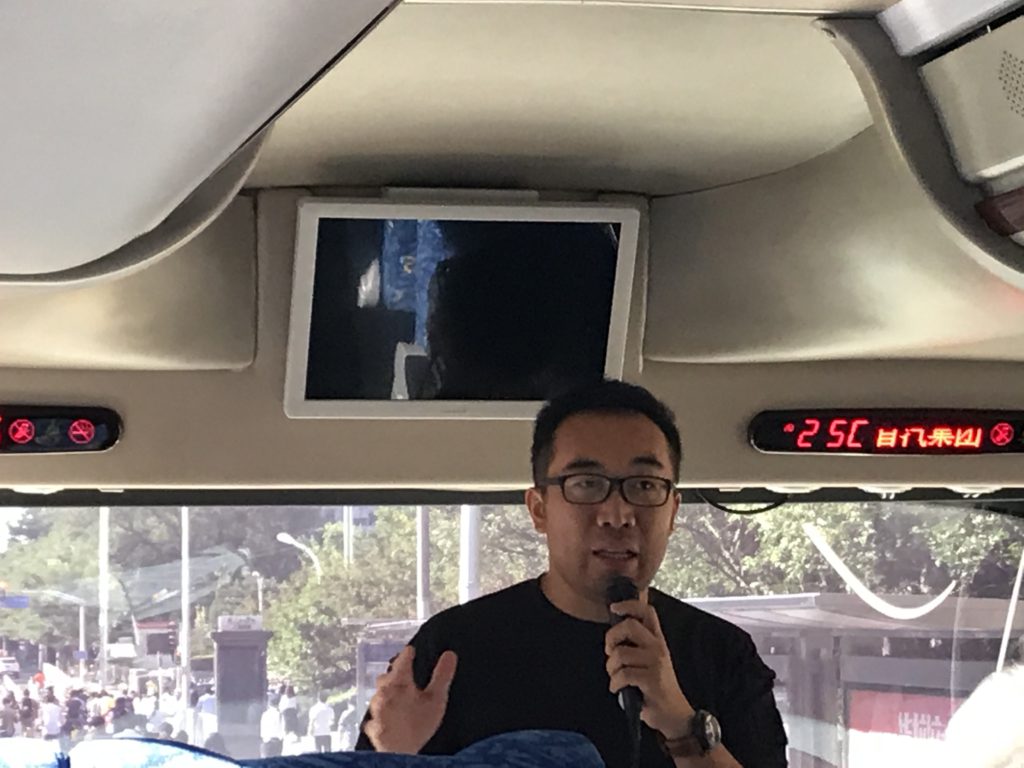 Once we boarded the bus, Joe told us all about the city from its history to its lifestyle. Apparently, KFC was the first western option in China so it became very popular. They were everywhere! Our first stop was the Temple of Heaven. Epcot fans may recognize the Temple of Heaven as the home to the Wonders of China Circlevision film. Built in 1420, it is where the emperors of the Ming and Qing dynasties worshipped. Today it is a museum and a park. 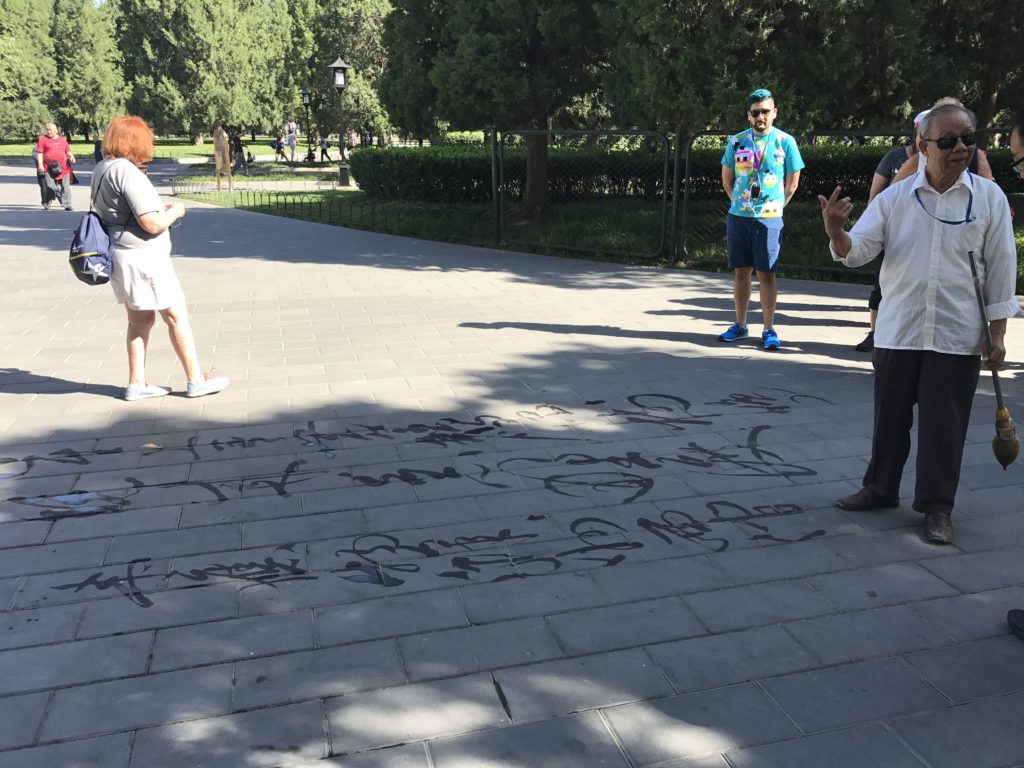 As we entered we saw a many writing caligraphy with water and a broom. You may have seen Disney custodial cast members draw Disney characters in a similar manner. We then walked through the park where we saw many senior citizens playing cards, conversing, and exercising. Apparently they can buy annual passes to the park and they visit frequently to enjoy the park and be social with other regular park goers. Sound familiar? When we got closer to the temple, we learned more about the rituals and the emperors that worshiped here. They were the only ones allowed to enter, which they would do three times a year. The rituals and the temple were all a part of ensuring a good harvest for the coming year. We then visited the matchmaking market where parents and grandparents whose children had not yet married would try to find others in a similar spot. They would lay a paper with the young adult’s basic information on the ground and try to find another parent with a compatible child. They would then pass off the information to their children with the hopes that they would hit it off. 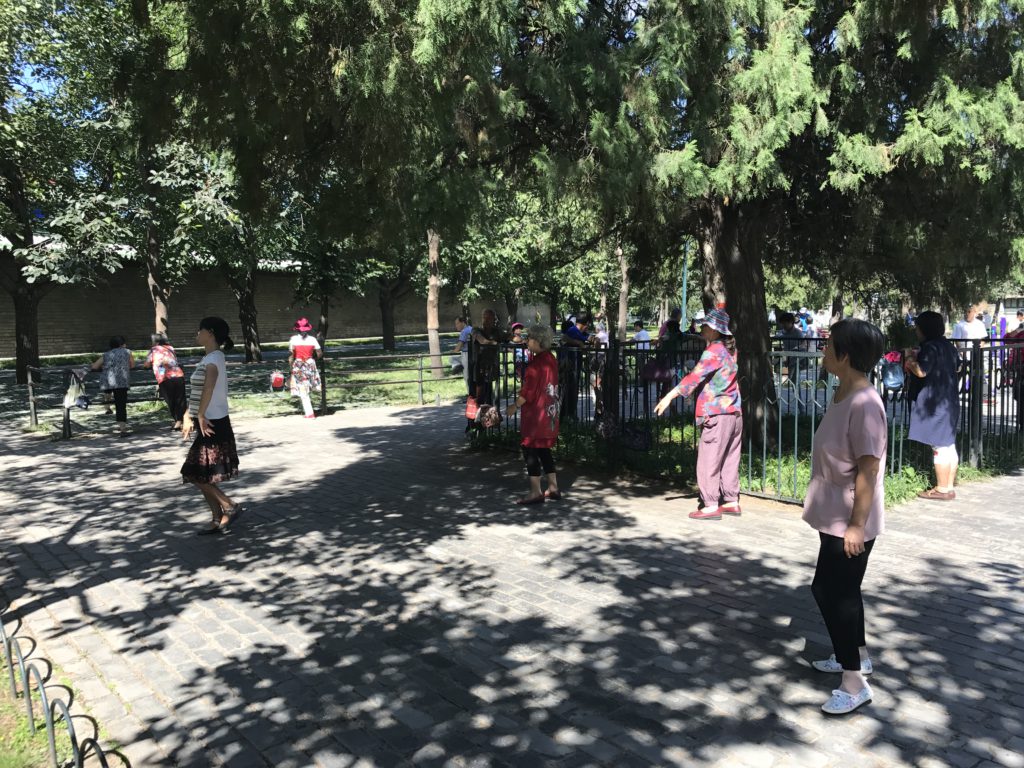 We were then given free time to shop and look around. I was amazed by the local character of the park. It really felt like a bunch of annual passholders who used this as a gathering place. Some exercised, others sang, while others just interacted. 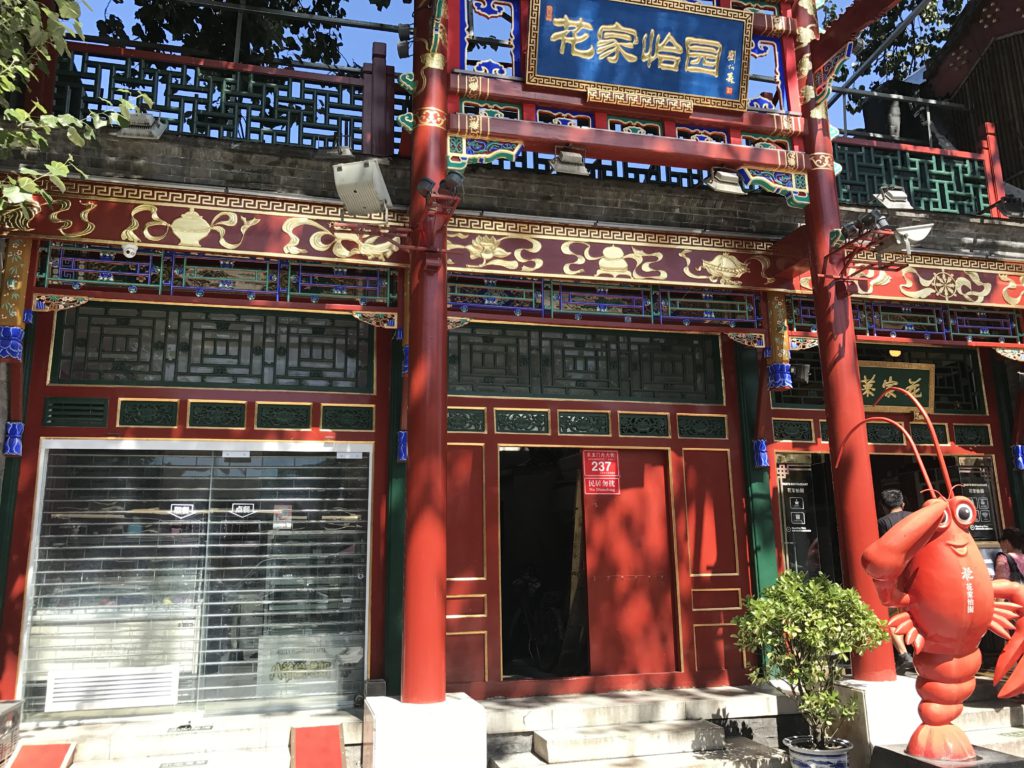 Next was lunch at the Huakia Yiyuan Restaurant. It was another family style Chinese meal with more courses than could fit on the table. We once again had a chance to try duck. We did learn that the fruit is always the final course. This proved important because we had no clue as to when the meal would end. Finally, we saw the watermelon.

We then took the bus to Tiananmen Square and the Forbidden City. En route, we were told about what we could not talk about while in the square: the three T’s (Tibet, Tawain, and the Tiananmen Massacre). Apparently they have listening devices and if Joe brought those topics up he could get in trouble. As he said, “they can guarantee freedom of speech, but they can’t guarantee freedom after speech.” Tiananmen Square is huge. Joe told us the history of the square as well as some facts about the surrounding buildings. Often times, these kinds of places look bigger on TV, but Tiananmen Square is the other way around. It was funny how many Chinese individuals wanted pictures with us. Joe said that people visit the square from outlying areas so we may be the first non-Chinese person they had ever seen.

We then took an underground tunnel (look up the history of those in Beijing) and entered the Forbidden City. I don’t think any of us were really prepared for how big it was. There is so much history and detail here that there is no way that I could sum it up, but this is not one of those places that doesn’t live up to the hype. About mid-way, we stopped at a four-star restroom. Apparently they rate their restrooms and four-stars is the highest. I would say it was more like a three-star, but who am I to judge? Our guides also bought us ice cream and drinks at a hidden cafe while we enjoyed a bit of the air conditioning. 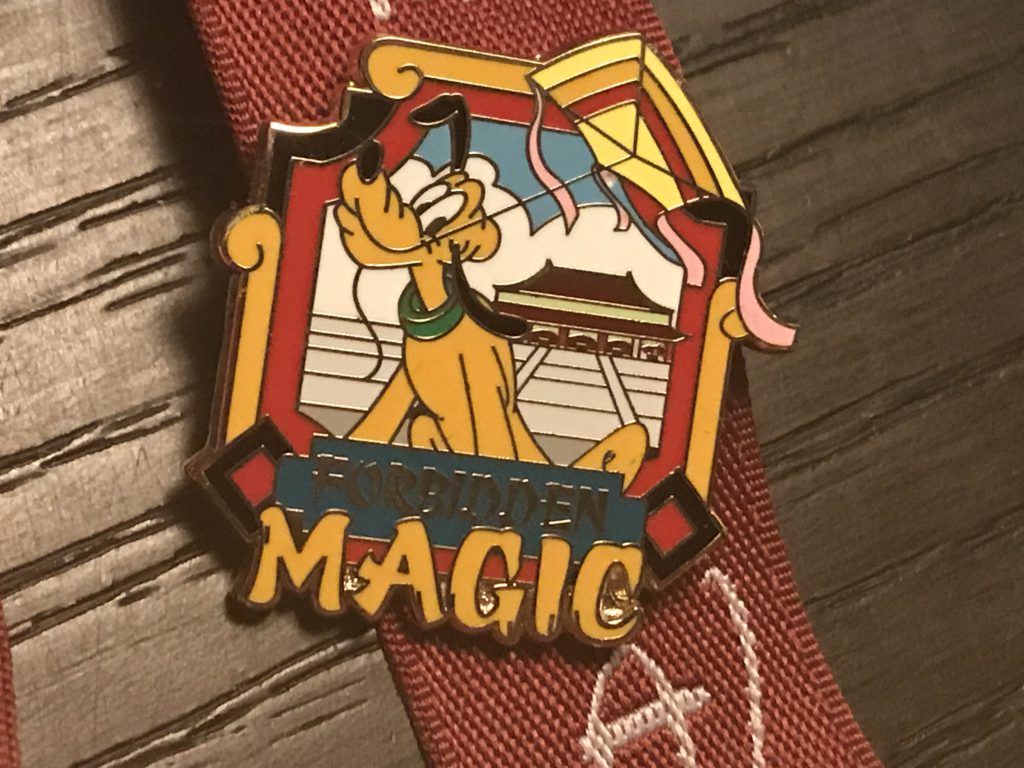 Once we entered the gardens, our long trek through the Forbidden City was complete. Our guides gave us our pin of the day and we returned to the bus. Traffic is a bit crazy in Beijing and it was about 4 pm so it took us some time to return to our hotel. On the way, the guides gave us some suggestions for our on-our-own evening. They did mention that the Country Kitchen located inside the hotel was excellent and that many people that are not staying at the hotel eat there because it was so popular. They hinted that reservations might be a bit tough, but many members of our group already had reservations. We tried to walk-up and were in luck. It was fantastic. Probably even better than the KFC, which was our backup plan.

Tomorrow we head to the Great Wall. We were told that there would be a cash-only marketplace so to bring money if interested. I thought I should be prepared, so I asked the front desk for an ATM. They took me to a hidden door which they had a keycard to open. The door slid open to reveal an ATM. The hidden door then closed behind me so I could complete my transaction. I felt like such a super-spy. A surprise highlight of the trip.