HASCON, a new event taking place this year Hasbro’s home state of Rhode Island isn’t your average comic-con or fandom-con type experience. Billing itself as “The Premier FANmily event” the gathering had a little bit of something for almost everyone. The Family event ran from September 8th through the 10th. 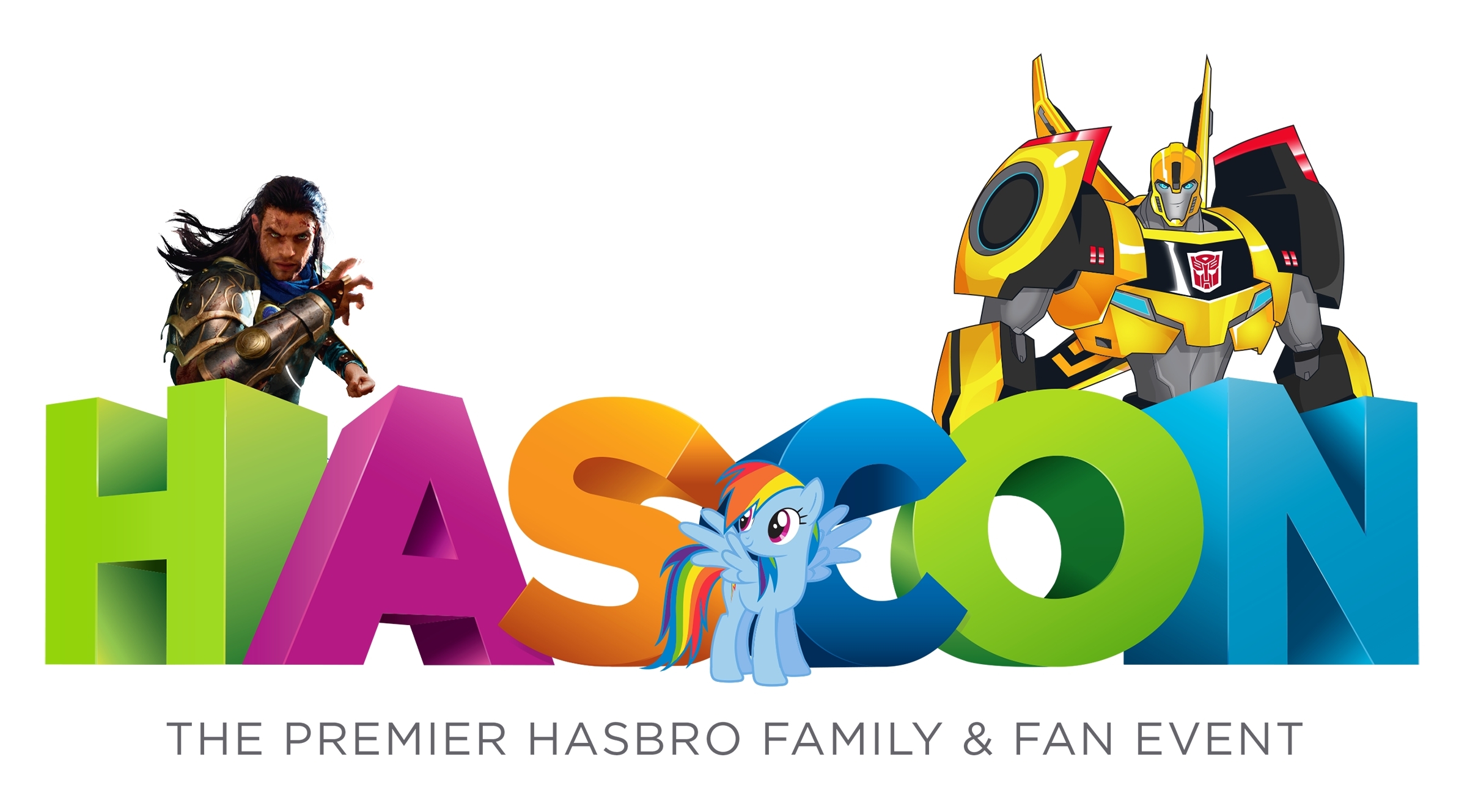 Relying heavily on their standard bearer board game brands they were able to create a fun family fair-esque atmosphere. There were larger than life versions of Pie Face, including their new Pie Face Sky High, there were areas for Play-doh, Nerf, PLAYSKOOL toys, My Little Pony and Mr. Potato Head. Each of these areas of the RI convention center had fun, and surprisingly free, activities for one and all. My previous con experiences may have left me a bit jaded, but when you get to take a picture with future Hall of Famer and former Red Sox player David ‘Big Papi’ Ortiz, and you don’t have to pay a penny (let alone the con minimums of $50 and up I’ve seen at other cons), I was rather gobsmacked.

There were these little areas built in all over the place, like Trolls, get your hair done up and colored, Troll style (gratis). Want to hang out with the Transformers, actual size and larger than life? Free for pics, free to play, take a left at the entrance. Not to say there weren’t VIP and add-on experiences, there were, but for things like dinner with Stan Lee; as well as a GI Joe dinner and something called the My Little Pony Mane event. I know nothing about MLP, so that was a bit lost on me.

The other HUGE draw for the weekend was two of Hasbro’s biggest table top role playing games, Magic The Gathering and Dungeons and Dragons. While I dated my fair share of nerds in high school, I know as much about them as I know about MLP. I could see, however, that the tournaments and play set ups were very well attended as were the panel discussions and VIP events. Also this group of fans brought the cosplay big time.

But what I was really there for was the Disney of it all, and all those awesome things that are part of the Disney Brand, like Star Wars. Walking into the hall on the first day it was fortunate for me that straight ahead was Disney alley. All of our favorite properties were represented. There were some costumes from set on display. (The whole time I was thinking Marshal would go nuts over this). They had all of their current and upcoming dolls out. I was impressed in the doll quality, the quality of the soft goods, as well as the theming and packaging. These are going to fly off the shelf this Christmas as every tween and teen will be wanting them, especially after the recent release of the Descendants 2 movie.

Just past Descendants there was Elena of Avalor display locked in a case, the items were absolutely gorgeous, and it looks like she’s getting a castle with an elevator that works. Next up was a set up for Tangled the series, where they had hairstylists doing free braids all day, I was going to do it on Sunday, I even Disney Bounded Rapunzel in my outfit, but alas, I relinquished any chance I might have to the adorable queue of girls instead. They did give me a ribbon and flower though! Also, after day one of the event the Disney dolls and toys were mostly off limits to touching by anyone.

After Disney was a huge Moana Display, with life-size cutouts to pose with as well as their new range of toys for the holiday season. There were tattoos for those who would like one, I saw many a kid sporting them with troll hair and braids.

There was an expansive display of the Princesses in their newly designed dresses. I found that I really like the new dresses, a little more modest, a lot more culturally appropriate and all around just more beautifully done. These dolls were available for purchase at the Hascon Shop, as well as other select items. As with the Moana area, there were large cutouts for folks to take pictures with their favorite Princesses with their story appropriate background. Disney also had displays for what looks like a significant expansion of their ‘Little Kingdom” line. There were play scenes, dolls, castles, houses and accessories galore. The great thing about these kits is they all fit together and dolls and accessories are interchangeable. In the Moana display, there was a similar size play model set up. While I was told it was specifically being marketed as Little Kingdom, those toys should fit well and play well with all sets. Of course, Belle was the Belle of the ball, with a working, and usable display of Dance Code Belle, a doll that works with your smartphone or tablet, and an app and allows you to program “code” Bella’s dance moves. On the first day, I asked what this would be listing at for retail and was told it would be $69.99. On Sunday a Hasbro helper recognized me and said that she’d double checked that price and it was actually going to be $99.99. I was actually quite pleased when I’d heard the first price tag, a little less so when hearing the second, but still, it’s an interactive toy and those cost more. The other hitch to the Code Belle doll is that it’s an Amazon exclusive. Which also allows Belle to be programmed on any Amazon Fire tablet. I’m hoping this isn’t exclusive forever, and that the price point either comes down, or more dolls become available at a lower price point. The coding is very simple, drag, drop, stack movements, press the arrow and off she dances. I would probably call this coding at only the most basic of level and that some older kids and tweens might find this more basic than they’d like in a toy. There was an interactive Elsa doll, who sings Let it Go (in case you forgot the words) and allows you to press snowflakes on her dress to make notes, which I’m currently seeing as retailing for about $10, so an interactive toy at a much more reasonable price point.

The event overall was great, but as it is in its first year I think there are some bubbles and squeaks to be worked out. It was not overly full every day, but unless you were there for multiday tabletop gaming tournaments, or wanted to see different panels there really wasn’t much more than a days’ worth of stuff to take in.

Coming up in the next few days I will have another article that is ALL about Star Wars, I got to meet some amazing people from the team, as well as see some sneak peeks of items for Episode VIII. There will also be some content on the Marvel Universe, I got to see part of a Groot 3-D printed, it was pretty awesome.