Uncle Milton has been a staple of my Toy Fair experience since I began covering the event for Laughing Place. This year, they are now part of a company called Basic Fun!, which also has Disney licenses for a variety of fun and collectible products. I was thrilled to see that Uncle Milton is continuing to offer fun and educational experiences, in addition to the great products from a company I was previously unfamiliar with.

Many of the great products you’ve grown up with from Uncle Milton are still available, including Ant-Farms in all types of sizes and even ones that connect. New this year under the Star Wars Science brand are some skeleton dig activities, where kids can uncover creatures from a galaxy far, far away. Two of the sets on display were themed to Tauntauns and Rankors, which are larger packs. In addition, there are Xcavations Creature Crates, like blind-bag figures that come in a small box. Kids have to dig these skulls out of sand and can uncover one of eight Star Wars creatures inside. Series one Rodains, Trandoshans, Monkey-Lizards, Gamorreans, and Zabraks. Series two promises Porgs, Twi’leks, Dewbacks, Reeks, Wampas, Vulptex, and Sullustan. Jabba the Hut Slime Lab is guaranteed to give kids gooey sensory fun. It comes with ten “disgusting” slime experiments, some of which glow in the dark. The slime reminded me of some of the toys of my childhood, like Gak. For my parent’s generation, it was Disney licensed Flubber. The final new Star Wars Science product on display Jakku Scavenger Metal Detector, which looks like Rey’s walking stick. It’s a real functioning metal detector and comes with pieces that parents can hide to send their kids on a metal detecting expedition. Mashems is one of Big Funs! Adorable blind bag brands and they have licenses for many Disney products. Under the original Mashems line of twisty and bendable round figures are sets themed to Star Wars, Disney Emoji Blitz, Incredibles 2 and Marvel’s Avengers. Even softer are Mashems Marsh Mallows, which break the round mold by featuring a full character shape. I was most impressed with the Mickey Mouse 90th Anniversary series, which features Mickey Mouse in some of his most iconic roles including The Brave Little Tailor and The Band Concert. Minnie Mouse also has a line that celebrates her fashion through the years. New to the line are Mashems Hatchems, which come in an egg that kids have to break them out of. There are two Marvel themed sets themed to Spider Man and Avengers. Disney Princess fans will be excited by Fashems, with a set themed to the classic princesses and another to Frozen. All of the Mashems blind bag releases feature rare chasers and in these sets, there’s the potential to find a sparkly character. 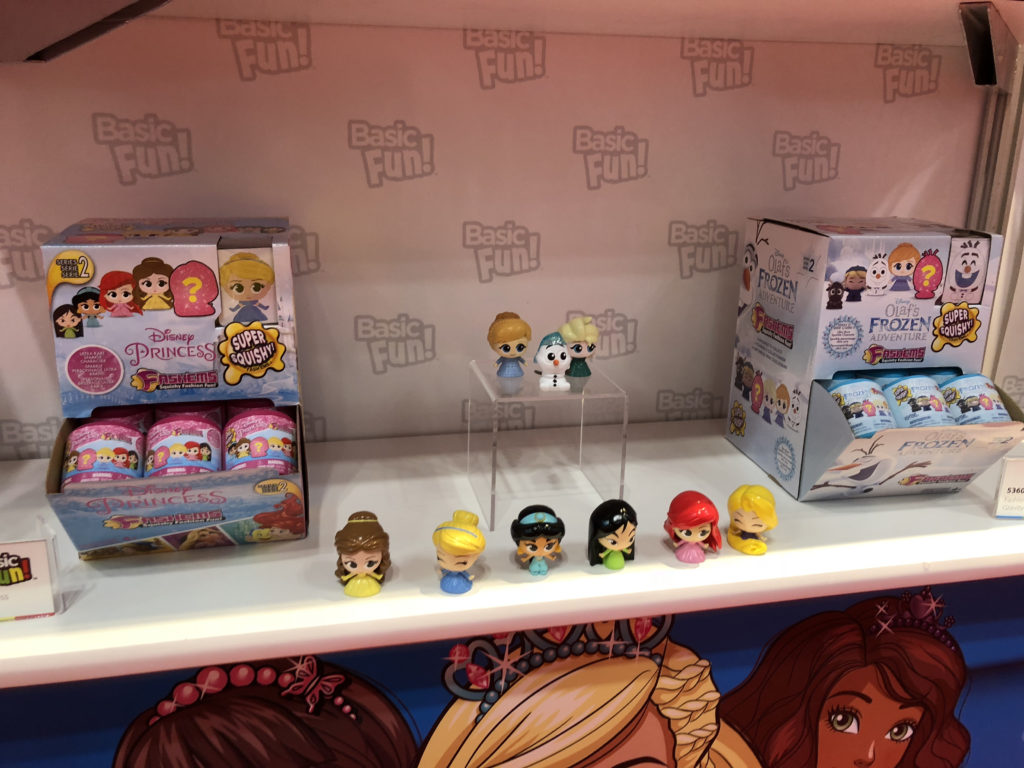 Yes, I’m aware that Disney doesn’t own The Pokémon Company or directly license products with Pikachu and his friends. But, Disney XD broadcasts new episodes of the Pokémon TV series, now in its 20th season, and also has every previous season plus some of the movies available on the Disney Now streaming app. So it’s worth stating that Basic Fun! Makes a Pokémon Trainer Guess game shaped like a Pokeball, where fans try to guess which Pokémon is inside the ball each turn. It’s almost like the “Name that Pokémon” ending of each episode from the first few seasons. The original Pokeball features the first 151 Pokémon and the upcoming Johto Edition expands to 251 with all of the additional Pokémon from the Johto Journeys. It was great getting to know more about Basic Fun! and all of the toys they make beyond their Disney licenses. In addition to Uncle Milton, they have also acquired K’NEX, classic nostalgia toys like LiteBrite and ViewMaster, as well as new and fun collectible series like Cake Pop Cuties, Build-a-Bot, and PooPeez, which is… what it sounds like and kids will never stop laughing about it.