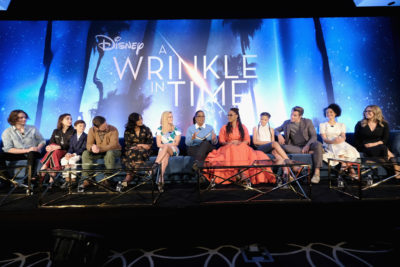 A Wrinkle in Time tells the story of a young girl who has to discover the light inside of her to battle some powerful dark forces. For Director Ava DuVernay, leading this project meant reconnecting with her inner child. “This is a film for young people and people who are young at heart,” she said. “For me, I had to ask myself ‘Do I still have a heart? And is there an inner child still in me?’ I tapped into the 11-year-old, the 12-year-old, the 13-year old in me. Find that light that I used to have, that dreamer. And so I got to do that for two-years, to really get in touch with all that I thought I would be when I was young and really tap into that and try to create some magic with this group of people.”

There’s no doubt in my mind that Ava DuVernay and her incredible cast absolutely made CinéMagique (c’est magnifique!) with this film. One thing every star of the film agreed on was that it was a dream come true working with Ava. “It’s very flattering to be chosen to be part of Ava’s movies,” explains Reese Witherspoon, “Because she doesn’t just make a movie, she makes an experience for everyone. She cares about what happens in front of the camera and she cares about what happens behind the camera. And everybody feels like they are important, special, honored, valued for their contributions. And I feel like this was a master class in how to be a very thoughtful filmmaker and a real visionary in so many ways. It was a privilege and an honor and I got to be this amazing celestial person who hangs out with Oprah and Mindy all day.” 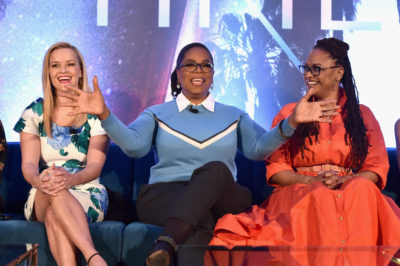 Much of the hype surrounding the film has revolved around Disney Legend Oprah Winfrey. Perhaps ironically, the Queen of All Media became involved simply because she wanted to visit New Zealand with her dear friend Ava, who produces Queen Sugar on OWN. She recounted the conversation that made it all happen. “Ava and I are talking on the phone and she went to New Zealand and posted pictures of scouting. I had been to New Zealand a year before, in Aukland, and did not get to the South Island and I so wanted to do that. So when I heard that she was going to be filming in New Zealand, I said to [her] ‘I’m going with you. I’m just gonna go.’ She said ‘What do you mean?’ I said ‘I’m just going to go hang out with you, however long it takes, you can block it on my schedule, I’m going to watch you shoot, I’ll say ‘Action,’ you know, because I can.’ She said ‘Well, if you’re serious about that, well why not take a look at the script? I’ve been wanting to ask you to do this but I didn’t want to pressure you because of our friendship.’ I go ‘Okay, I’ll do it.’ I didn’t even know what it was and then I thought okay, let me read the book and see what this is. I had never read the book and you know, I’m a reader. It wasn’t actually until the very first day I was called for a fitting for the costumes, with Paco Delgado, and  I realized ‘This is some kind of movie.’ First day on the wires, I went ‘This is really… What kind of movie is this?’ But this really came up out of the imagination, so this has  been a… you know, when you look up the word ‘Delight,’ there is my picture being in this film. The whole process has just been one big delight.”

One of DuVernay’s bold visions for the film was a diverse and multicultural cast, which includes the voice of Disgust from Inside Out, Mindy Kaling. “It’s such an honor to be working with these incredible actors. I’m a sitcom actress and Ava saw something in me. We actually met at a party for Malala. Ava, Malala and I were the only three women of color at this big party. And after I finished talking to Malala, I turned to my left and I thought ‘I want to talk to Ava.’ And after talking with her I thought, we will never cross paths and then this happened, so I feel so blessed to be part of it. I got to spend four hours each morning in a make up trailer with [Oprah and Reese], which was great. Zach Galifianakis helped me with his online acting course. I talked with him because this had a lot more drama than I was used to and he was very encouraging.” 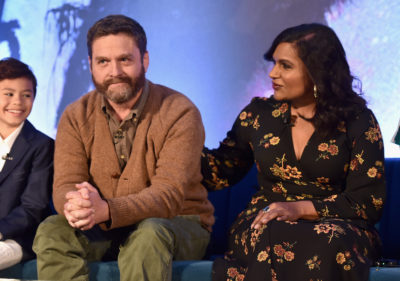 Mindy is obviously joking, referencing the “Acting Class” segments of the Adult Swim show Tim and Eric Awesome Show, Great Job! “Ava wanted to have lunch or dinner and I said ‘Whose paying?,’” Zach jokes. “I had seen a documentary that Ava did and that alone was enough. You know, you can kind of see people in their work and I was kind of… I think you can tell that one of us doesn’t belong here. I feel like that sometimes and I was inspired by how Ava and all the people here were very gracious. When you’re a stand up comic, you kind of have sometimes a… not a chip on your shoulder, but you kind of feel like you don’t fit in. You know, that’s where I come from and to be involved with such a big movie like this, it really makes me feel proud.”

“He was the first person who said ‘This is for boys, too,” DuVernay recalls her lunch or dinner meeting with Zach where she definitely paid. Galifianakis continues, “Boys need to be able to see themselves be vulnerable and themselves be able to follow. They don’t always have to be macho. I think it’s good because it’s nice for young boys, young men even, to see that it’s okay to have a sensitive side of you. When young boys in this climate, they are seen as sensitive and they’re made fun of, but that means they’re stronger to me. And I wish we could change that. I come from a very masculine upbringing and a lot of people do, I love the way I was raised. But looking back, you need balance. It’s time for balance.” 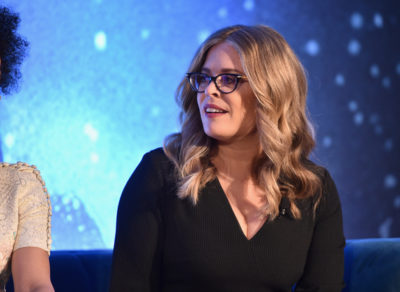 During the press conference, the conversation often found parallels between Meg’s journey to find her light in a world of darkness and the rising darkness we may feel in the world around us. Jennifer Lee, who wrote Frozen, was responsible for updating the classic novel by Madeleine L’Engle for a modern audience. “We talked a lot about what makes Wrinkle so amazing and why it’s resonated for decades because there is a timeless quality to the source material. But we did look a lot at what are those themes today, what do they mean today, and how do you reinterpret them in a way where we all say this is our world, this is something we understand. So we had a lot of conversations about what we were inspired by and what that meant to us growing up and to the children now and to the world.”

On this same topic, Oprah was as inspirational and motivational as her character, Mrs. Which, speaking both about the themes in the film and the state of the world around us. “I think the darkness is there to help bring out the light in all of us. And if you think about it, if we turned all the lights off in this room and one person just held a candle, you would start to dissipate the darkness, you would banish the darkness. Think about how much darkness it would take to actually envelope all the light that every candle would hold in this room. So it just takes a little bit of light. Just a little bit of light. That’s what we’re hoping for, a little bit of light. And if everybody can get that message, that’s how we have hope in the world. We’re looking for warriors that can bring hope back.” 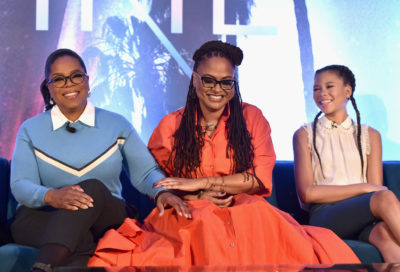 Ava DuVernay and Oprah have both collaborated on films and television projects in the past. But making A Wrinkle in Time was unlike any project they’d collaborated on before. “Well first of all, you have Disney money,” Oprah explains. “You’ve got the Disney machine and that’s one of the reasons why this is so exciting, that Ava DuVernay is at the helm of that. It makes me well up inside, it fills my heart every time I think about Ava and her dreads and her sneakers and these big cranes and all of these men running around taking direction from her. And to see her master that, to orchestrate all of that was powerful and inspiring. And it touches I think the part of us that recognizes, oh yeah, we can do that. I was just so proud to be associated with her and her ability to make this film possible.”

“I feel like I tried and gave everything that I have to a film again,” Ava DuVernay sums up her experience on the project. “There’s love in every frame of this movie, there’s love in every frame of everything that I do. I don’t have children, I don’t have any kids by choice, these films are my children, they’re what I leave behind, they have my name on them, they have my blood in it. And so with that and from there, you offer it up to the world and I hope that they can see our intentions. This was an extraordinary experience for me. It’s emotional sitting here with all of them because we really held hands on this and became a family. Try to give a little bit of sweetness to the world in these dark times, you know, it’s a tough time right now and so this film really saved me in a lot of ways. It stopped me from going in a dark hole and kept me in a really light-filled place for the past few years working on A Wrinkle in Time.”

You can rediscover your inner child and find the light inside of you when A Wrinkle in Time hits theaters on March 9th.