Pixar fans have four separate 1,000 piece puzzles to choose from, all aimed at an adult collector. The first is called The Artist’s Desk and offers a peak at Pixar studio life for an animator with character sketches lining a desk illuminated by a red table lamp. A human anatomy figure is standing by, pencils and paints strewn about with concept art of characters like Crush, Jessie, Woody, Nemo, Marlin, Mike, and Sulley pinned to a cork board. A well used Finding Nemo coffee mug is being used to clean paint brushes and a studio guest pass hangs in the corner. The third celebrates the studio’s first 9 films from Toy Story through WALL-E. Each film is framed by a film strip with character artwork inside. The last Pixar puzzle repeats the film strip motif, but this one featuring still images from Toy Story, Finding Nemo, and Monsters, Inc. Need help with your puzzle building? The Disney Puzzle Sort & Go pack features stackable treys in Mickey’s color scheme to help you sort your pieces and keep them organized. A prototype was on display and it’s unclear if the trays will be shaped like puzzle pieces or Mickey Mouse, but either way it will be useful. 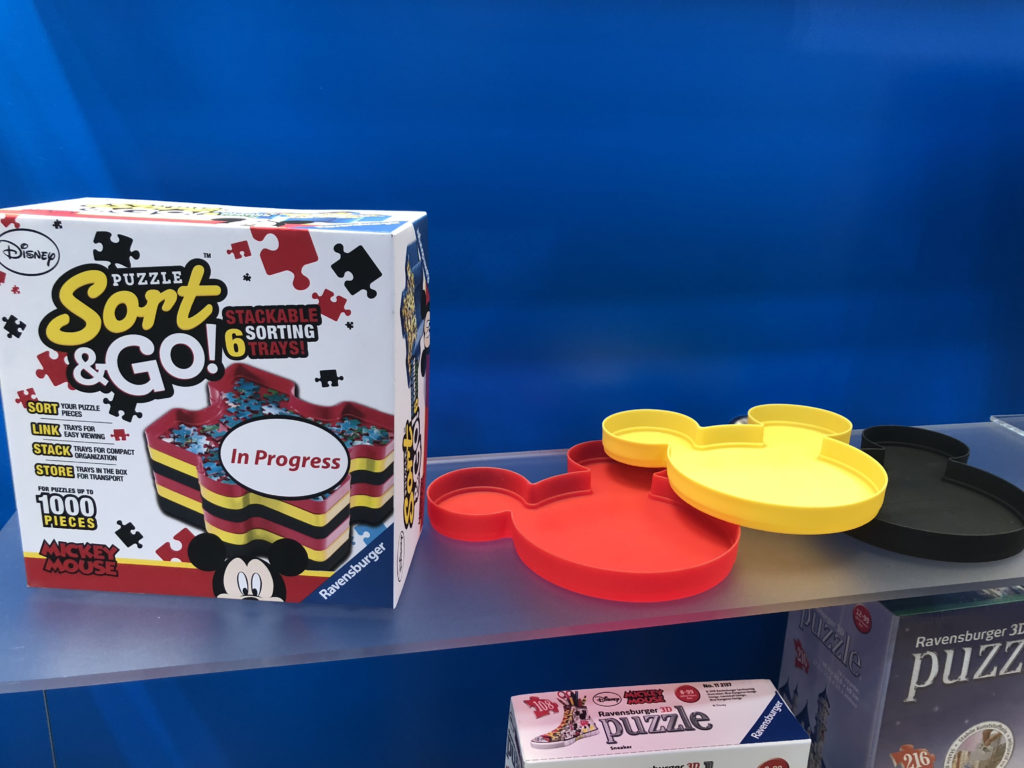 Another useful tool is the Disney Puzzle Stow & Go, a rollable mat with Mickey theming that can be used to roll and put away puzzle that is up to 1,000 pieces. Both tools together are ideal for Disney puzzle fans. Ravensburger has the license for Incredibles 2 puzzles and fans can look for 1,000 piece puzzles in stores this April. Mickey Mouse will celebrate his 90th birthday this November and a celebration launches this August. Ravensburger is planning to celebrate in a big way with a 40,000 piece puzzle that will feature 10 panels of Mickey history. This is their second 10-panel 40,000 piece puzzle, which can be used to decorate an entire room if you seal the pieces and frame them. 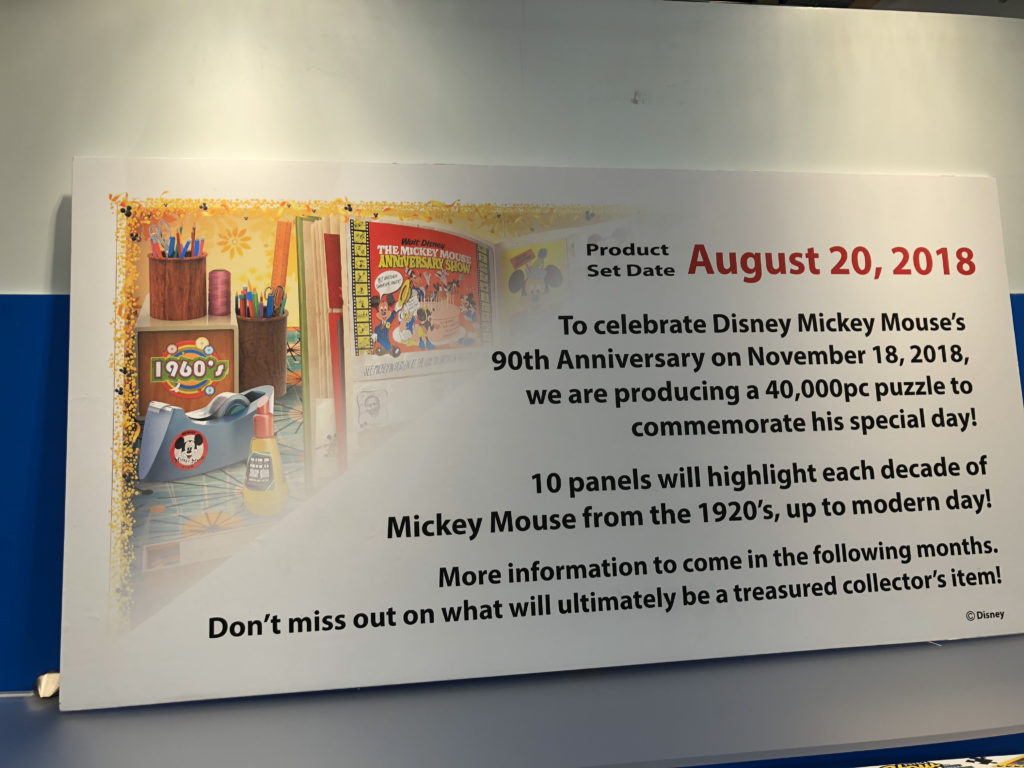 The previous 40,000 piece puzzle is also Disney branded, called Memorable Disney Moments. They had it on display in a private room, where it fills three of the four walls! Fans can also look for Ralph Breaks the Internet: Wreck-It Ralph 2 puzzles this fall. I’m hoping for a 1,000 piece puzzle of a fully kitty trying to eat one more stack of pancakes. Looking at board games by Ravensburger’s Wonder Forge brand, the Pictopia: Disney Edition will receive an update this year to include the most recent films and TV shows. Disney fans can celebrate their Disney knowledge as a family with this fun board game.

Aimed at younger kids, a new board game called PJ Masks Team of Heroes is based on the hit Disney Junior series and comes out later this year. Vampirina gets her own game with SpinGo Round!, with four different ways to play. 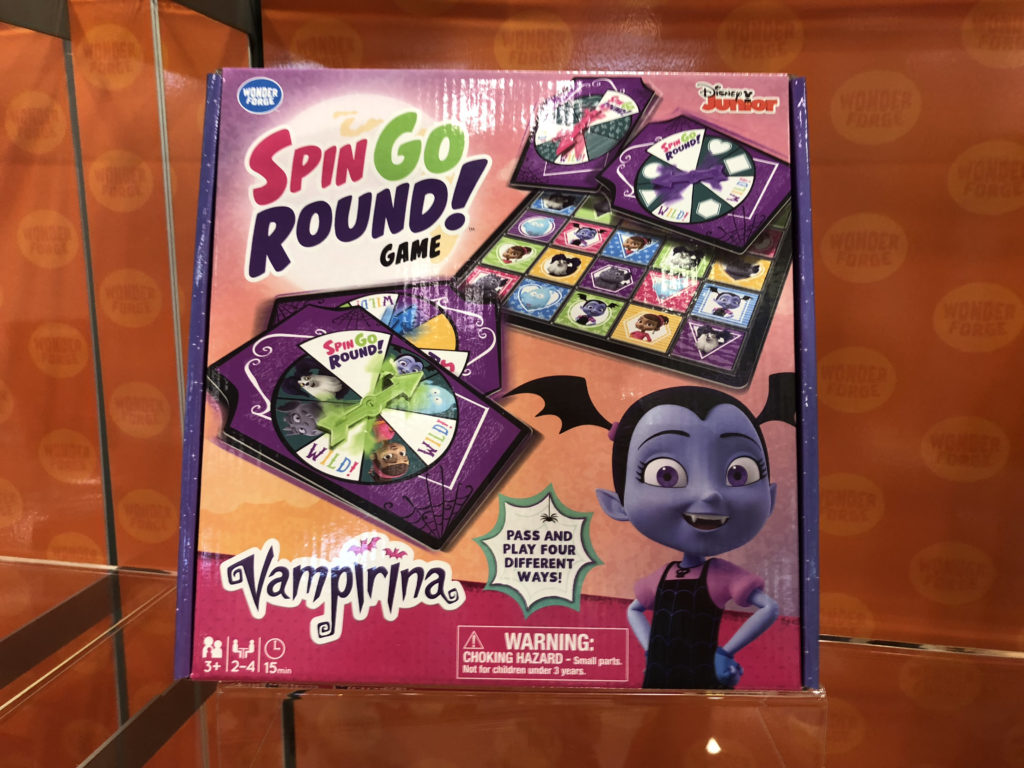 And the upcoming Disney Junior series, Fancy Nancy, is the theme of a new Matching game. You may already be familiar with this character if your kids are fans of the Fancy Nancy book series that inspired the upcoming show. Ravensburger continues to offer fun and creative ways to celebrate your Disney fandom with puzzles and games for the entire family. Many of these new products are available now, with some scheduled to be released closer to the next holiday season. I don’t know about you, but I’m curious to learn more about the 40,000 piece puzzle to celebrate Mickey’s 90th birthday!