The hype around December’s release of the eighth theatrical Star Wars saga film, The Last Jedi, is well past us. I saw it twice, a low for me. I usually see Star Wars films three times in the theater (I saw Rogue One five times). I’m not bragging, I’m just pointing out that most of what the film had to offer seemed to be revealed in those two showings. Many conversations I’ve had since have highlighted a common theme: we didn’t get enough answers to many of the questions that arose from The Force Awakens. I’m not one to criticize the movies—they are what they are, and I love them for that. But it didn’t seem like hardcore fans were getting the explanations that they wanted. I felt this way, too, until I picked up the new Del Rey novel The Last Jedi: Expanded Edition by Star Wars expert Jason Fry. 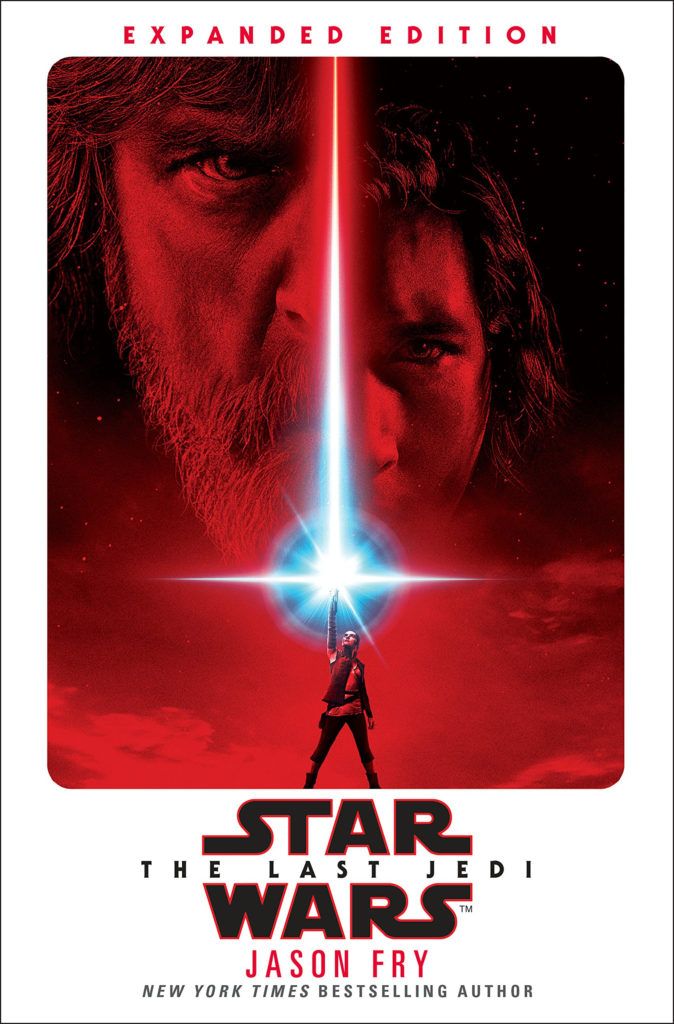 Fry’s familiarity with the Star Wars Universe comes after many contributions to the Galaxy Far, Far Away, everything from Clone Wars episode guides to breakdowns of Luke’s lightsaber, cross sections from Force Awakens, and Rey’s guide to survival (The Clone Wars: Episode Guide; The Weapon of a Jedi: A Luke Skywalker Adventure; The Force Awakens: Rey’s Survival Guide; and The Force Awakens Incredible Cross Sections), just to name a few. A self-proclaimed super fan, Fry knows his SW-stuff. His talents shine most brightly as he deftly describes the images and scenes we’ve all come to know from the movies with words and phrases that accurately summoned the on-screen visuals as I read the book. I feared that I may have been a bit bored while reading something I’d seen—as such I usually don’t see the movie before I read the book, as it spoils the imaginative landscape that my own brain creates whenever I read a story for the first time (though I never read a Star Wars novelization before seeing the movie)—but Fry is so good at what he does that the pages turned and the story moved along. The 312 pages melted away as I returned to the excitement and drama of the film.

Rian Johnson, writer and director of TLJ, gave Fry access to previous versions of the script and insight as to how the characters came to do what they did in the films. This allows the hardcore fans to receive a measure of satisfaction that they may have lacked after walking out of their local cinema in December 2017. Many times during my review of the book I found myself thinking “This should have been in the film!” Gratefully, with this novelization, we have a greater understanding about some of the back-channel sophistries that motivated our heroes and villains.

The most welcome of these motives come from the Supreme Leader Snoke’s personal thoughts about events as they unfolded. His greatest reveals come in Chapter 25, where we learn some things about his origins, but more about his motives. More or less, he’s been controlling everything since Return of the Jedi and is a perfect replacement for the manipulative Palpatine. Don’t just drop into Barnes and Noble and skim that chapter, because if you do, you’ll miss out on a treasure’s trove of gems that are revealed all throughout the body of the story.

Readers will gain more sympathy for Luke, seeing him less selfish and more heroic. They’ll get into the artificial intelligence of BB-8 and find him to be a well-developed character and agent of the Resistance. This happens, in small part, with C3PO and R2D2, and we are also introduced to some of the quirks that the Millenium Falcon’s three different droid minds possess. You’ll find that Poe Dameron’s actions played part in the ultimate outcome of the Resistance’s stand-off with the First Order; that Leia is very well-developed as a leader and wielder of the Force; that Holdo was not out of her league (and for those with poor memories, such as me—you will be reminded of her connection to Leia); and finally, you’ll get additional scenes that were originally intended to be in the film, but cut for editorial reasons. Gems! (The second to last interlude, pages 309-310 had me more excited than any other part of the book. So many questions…)

In summary, your time spent with this book will be rewarded with a greater understanding of the characters and their motives. Short of a sit-down interview with Luke, what more could you want? The book will not answer all your questions; in fact, the stories unveiled may create more. But they’ll entertain, enlighten; they’ll give you more things to talk about at your next Star Wars fan club meeting; and above all, they will convince you that Disney has become a dedicated caretaker of this bigger-than-life franchise.