Book Review: “Aru Shah and the End of Time”

Middle School student Aru Shah is having a hard time at school. Though she attends a private school with some of the richest kids in Atlanta, she is anything but rich. Living with her mother at the Museum of Ancient Indian Art and Culture, Aru lives in a world surrounded by ancient artifacts while trying to survive the burdens of the teenage years. 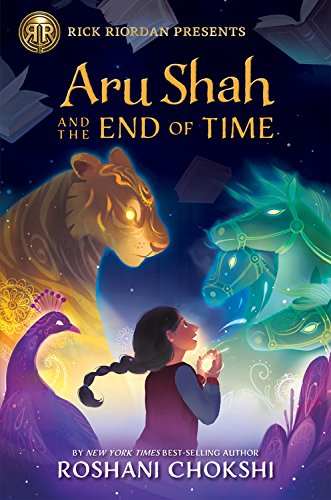 After a dare from some snotty classmates who have sought Aru out, our poor heroine lights the Lamp of Bharata, something that her mother has told her is cursed and should never touch, to impress her taunting classmates, and that is when the end of the world begins.

For Aru, this lighting of the lamp awakens the Sleeper which will seek out Lord Shiva and bring an end to time. The lesson should be that when your mother tells you to do something, always listen. Readers will empathize with Aru as she learns about the consequences of lighting the lamp and the danger she put everyone in.

The Lamp of Bharata is an ancient Hindu artifact, and though she has been surrounding by this and other ancient Hindu relics, Aru learns that she has a far greater connection to the Hindu gods then what she believed. Upon the freeing of the Sleeper, Aru meets a talking pigeon named Boo who guides her along on her journey to defeat the Sleeper. On this quest Aru learns that she is a reincarnated spirit of one of the Pandava brothers, who were Hindu demigod warrior princes and she is not alone. With Boo, and another reincarnated Pandava spirit in the form of a younger girl named Mini. Aru, Mini and Boo set out to be claimed by the gods, and then defeat the Sleeper.

After a trial period before the Hindu gods, we learn that Aru is a child of Indra, the King of the Heavens, and Mini is a child of the Dharma Raja, the Lord of Death. Finding their spirit parents, the trio set out to claim celestial weapons from the Kingdom of Death. As the journey progresses, Aru and Mini bond, and though they are not blood relatives the spirit of the reincarnated souls that Aru and Mini hold comes through in all manner of challenges they face.

You could feel the agony at the choices made by Aru and Mini as they journey through the Kingdom of Death and readers will cheer the heroines on in their battles against evil demons and monsters.

Aru Shah and the End of Time by Roshani Chokshi, is the first book to be published under the Rick Riordan Presents banner with Disney/Hyperion Books. Riordan a master at weaving fictional tales with Greek, Roman, and Norse mythology, is lending his name to promoting and choosing books from a diverse set of authors that will hope to illuminate readers to the variety of stories in the world based on different cultures

Since his success with The Lightning Thief, Riordan has been asked when he might explore other cultures in his writing. Since he is quite busy with his own literary world, Riordan is in the position to help propel other authors who can take the time and energy to explore and write about other cultural beliefs. Aru Shah and the End of Time by Roshani Chokshi is the first book to be published under this new banner, and what a home run for this first book.

For fans of Rick Riordan’s, the themes that Chokshi explores in her book are similar. A disconnected youth, who in the middle school world has a hard time fitting in, ultimately learns she is destined for something greater and goes on a quest that will test her character, help her grow, and ultimately find her place in the world. Chokshi has brilliantly taken these common literary themes and made them unique and fresh with her character development and use of Hindu mythology.

Having read everything that Rick Riordan has written, I was skeptical about the quality of the Rick Riordan Presents banner. Would it be as good as the Percy Jackson, Magnus Chase, or the Kane stories? The answer is absolutely.

Within the first two pages, I found I was sympathizing and wanting to help the main character of Aru Shah. Roshani Chokshi gives us a main character who is as she said on page three, “waiting for magic, and every day was disappointed.” Oh, the angst of being in middle school. It seems like that age can be the cruelest, because kids are not old enough to do certain things, like drive a car, but they have wildly imaginative and interesting ideas that they have no way of making come true without help from an adult. Kids at this age are constantly looking for magic to illuminate their day.

What makes Aru Shah and the End of Time so compelling is the journey through Aru’s eyes and her developing relationship with her ‘sister’ Mini. They are not blood related, but with the reincarnated souls of the warrior Pandava brothers, they forge a bond that may even be stronger then something they would have had if they lived in the same house.

I had prior knowledge about Norse, Roman, and Greek Mythology when I first journeyed into the literary world of Rick Riordan, but I knew little to nothing about Hindu beliefs, and the gods that make up this world. Aru Shah and the End of Time is the book that I look forward to reading to my daughter.

The characters and gods that make up Chokshi’s world are hilarious and typical of what we have seen in similar books from Mr. Riordan. But what I enjoyed the most from this story, other then the two girls battling demons, and tricking gods into helping them, was the fact that they were responsible for their own success. They had a guide in the form of a talking pigeon named Boo, another reincarnated spirit from Hindu folklore, but the girls were successful because of their own intelligence, and their own choices. The empowerment that Chokshi places in her two main characters of Aru and Mini, tells readers that girls are strong and fierce and not to be underestimated.

Riordan’s new imprint offers authors with the diligence to research and some personal experience the chance to write about where they come from and share it with the world. What readers get in Aru Shah and the End of Time is merely a slice of the stories Chokshi heard as a child (along with her research). As Chokshi says in her preamble to the glossary, “These myths and legends vary from state to state,” in India. She goes on to state that she hopes that the world of Mini and Aru will push readers to do some research of their own about the Hindu culture.

I have no doubt that young readers across North America will soon be making Google searches about the legends of the Pandava brothers and Lord Shiva. I know I have.

I loved this book and look forward to the next book in the saga, Aru Shah and the Song of Death coming April of 2019.