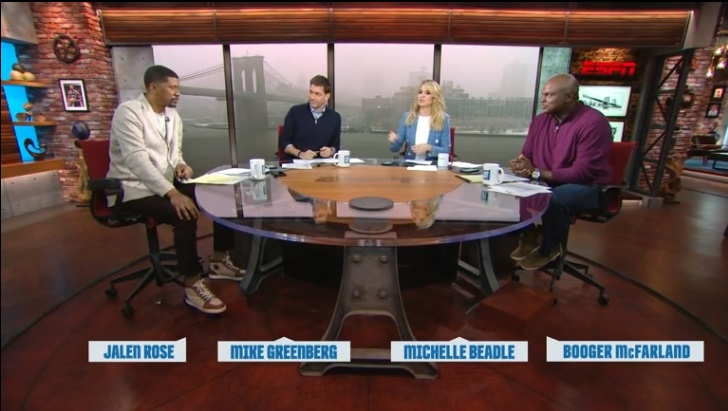 Morning is not my time of day so I am glad that this show does a nice job of being energizing without being too perky. A great fit if you are someone who needs the caffeine to work a little more morning magic before hitting the day at full speed. Currently the show is built around a 3-host-base and everyone did a great job of giving each other space to talk and didn’t step on each other as I expected for a premiere show. It is evident that a lot of rehearsal time has occurred.

Their “Top Story” and “Get Up & Go” segments at the show’s outset do a fine job of bringing you the biggest sports news stories while moving at a brisk pace. Make no mistake, unlike Mike & Mike which was radio on TV, Get Up! is a morning TV show. The team uses the screen well without inundating you with graphics as I felt happened during the latter months of Mike & Mike. And while the pacing between topics feels quicker than radio, I found that when the topics were revisited over the course of the show’s 3 hours, the hosts were afforded more of a chance to discuss the stories during the 2nd and 3rd hours so that the hosts banter was not merely recycled from earlier. 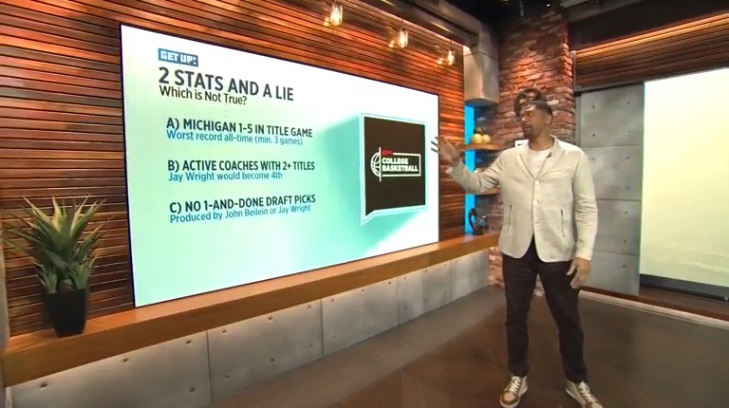 I enjoyed the choice of using trivia questions, which took the form of 2 facts and a lie, True & False or Blind Resume. as the transition to and from select commercial breaks, especially since how poorly Jalen Rose answered them opened the door for his hosts to rib him. I am pretty sure that Jalen didn’t get one correct today and according to Beadle & Greeny he answered them all incorrectly during their rehearsal shows as well. I suspect this could prove an ongoing element of humor.

I can see their segment “My Favorite Athlete of All Time – right this Second” developing into a retweeted moment. Today the segment sprinkled throughout the show featured a wide array of clips. During one hour it was a football player who seemingly practicing defense by defending against knife play. The 2nd hour featured a touching reunion between Chase Utley and a young man who is now a baseball prospect who had been visited by Utley 10 years ago when he was a child battling cancer. The 3rd hour featured the off-the-bench goal of Zlatan during his debut with the LA Galaxy. The most disappointing segment today was their “Hot Take Factory” which really seemed to kill the show’s energy and flow when it was introduced early in the show, but it fared better when it was brought back during the show’s last hour. In the segment a news story is read and the show’s executive producer would dryly read a related “hot take” for Beadle to rate and the hosts to discuss. I understand not wanting to create another “embrace debate” segment like found on First Take, PTI or Around the Horn but given the popularity of the “hot take” and ESPN’s numerous “hot take” champs like Stephen A, Max Kellerman & Stugotz, the segment could be a way for ESPN to be a bit self-deprecating while acknowledging the value of the hot take as it can spark some out of the box discussion on topics that as sports consumers we hear often. It is segment that I suspect will be massaged and will eventually find its place, become a “must see” component, and offer a quote or clip that fuels the ESPN discussion machine. That being said, it fell flat for me today. I also found the Beadle and Greenberg SportsCenter Top 10 read uneven, but these were not indicative of the show’s overall performance. Their team gathered some great interviews for today’s debut as well, with Jay Bilas appearing in cowboy finery for his interview from San Antonio.

Michelle Beadle’s smile and laughter is nicely balanced with the jovial Jalen and the not-quite-as-smiley-but-not-dour Greeny. I hope over time we’ll find they can have as much fun together as it seems the Turner Sports basketball crew does.

Beadle’s interview with Notre Dame Women’s basketball star Arike Ogunbowale was a delight, as was the portion of the show where she and Jalen discussed NBA highlights in a segment called “Run the Floor.” Greenberg quickly reminded me how smoothly he can segue topics as well as how awkwardly he can shoehorn ridiculously large words into a discussion. He had felt defensive in his latter months on Mike & Mike,  which isn’t surprising when change is announced but months off. Here he once again seems settled. He wasn’t as stiff as he has appeared in other TV hosting duties — years ago on Duel and recently on Battle of the Network Stars. I enjoy his banter on highlights and sports stories but I haven’t been as much of a fan of his interviews so I’m interested to see how Get Up! interviews evolve with Beadle, Rose and Greenberg all available for those duties. I’m not as familiar with Jalen Rose but did enjoy his comedy pilot loosely inspired by his life and found he added an element of goofiness and sports insight during today’s episode that appeared to connect well with other hosts. Time will tell how their differing backgrounds and life experiences will shine through as they discuss sports news and interview various personalities within the sports world. 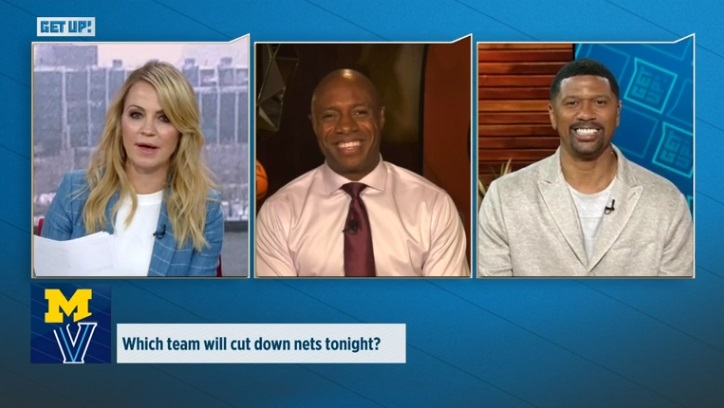 Several of the show’s segments “Who Won the Internet”, “Meanwhile on Planet Earth” seem geared to allow for pop culture talk like we see on Highly Questionable or SportsNation – a place to discuss the latest meme or viral video. But unlike the initial rumors surrounding the show, it doesn’t feel designed to be a sports heavy Good Morning America or The View, where you would expect to find the hosts and athletes hotly debating political issues along with sports topics.

Given the crowded morning talk show space, it will take time to see if ESPN’s new effort will be able to rise and catch some of that morning attention. In my own life, I tend to listen more than watch in the morning so I’m unsure if it will fit within my own daily routine. But I used to carve out some time for Beadle on SportsNation and I was a long-time Mike & Mike listener, so I suspect Get Up! could become my usual accompaniment to morning coffee or perhaps my morning fitness routine, and I’m sure their goal is to create buzzworthy, water cooler chat content that will pop up n my twitter feed as well. Greenberg’s prepackaged video on the value to baseball that having a Yankees franchise we can all hate shines as an example of that.

Today’s show would indicate that they will not seek that out by being deliberately controversial, as is common in sports talk. That is very challenging path. but I hope one that pays off for them as I am burned out on the “what outrageous thing can I say so people will talk about it” pattern. Tomorrow Get Up! will have an interview with Steph Curry, Jay Bilas will return to talk about the NCAA Tournament that concludes tonight as will Scott Van Pelt to continue his preview of The Masters. I plan on tuning in and I hope you will, too.

Get Up! Airs on ESPN from 7-10a ET, re-airing at 10a ET on ESPN2. You can also watch replays through the ESPN app or download and listen to the podcast through iTunes and other platforms.