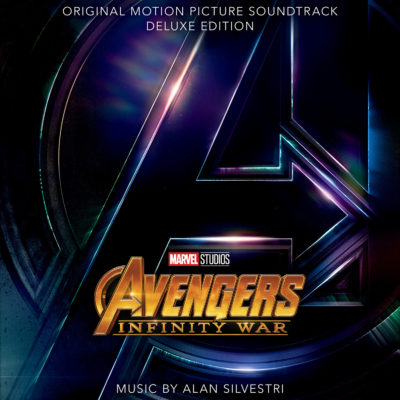 Walt Disney Records celebrates the release of Marvel Studios’ record breaking Avengers: Infinity War with a deluxe digital soundtrack release. With almost 2-hours of audio, this soundtrack contains more than just the complete score with some tracks listed as “Extended,” likely scored with shots that were cut from the final film. It’s as if we used the time stone to flash forward 10-years to a special Intrada release that we won’t need now.

Avengers: Infinity War is one of the biggest, most action-packed films of the MCU and Alan Silvestri’s score reflects that. I’m a big fan of Silvestri’s work and the theme from the first Avengers film is sparingly peppered into this score from time to time. It is most prominently used at the start of a track called “Help Arrives,” where it is plussed with additional beats that remind me of Illuminations: Reflections of Earth. If Disney Parks ever does a Marvel fireworks show, they could reuse the intro of this track to kick it off. But the Avengers theme is only brought in a handful of times. Most composers rely heavily on themes established in previous installments, but Silvestri is bold and daring in this follow-up.

I hope it’s not spoiling anything for you when I say that the film has a lot to do with Thanos and one of the most memorable new themes centers around his character. The brilliance of this piece is that it can be played menacingly as well as to express joy and sadness. Think of it like John Williams’ “The Imperial March,” which is uptempo when things are going well for Darth Vader and downplayed during sadder moments. Another epic new theme written for the film reveals moments of loss and despair. My favorite track with this theme is called “Even for You.”

The Infinity War score uses lots of instruments and arrangements that remind me of some of Silvestri’s past works. Big horn sections call to mind elements of Back to the Future, lilting pianos at times remind me of Father of the Bride, and choral moments remind me of The Polar Express. But more than anything, it stays in line with his scores for the original Avengers as well as Captain America: The First Avenger.

Alan Silvestri has written another spectacular score for Avengers: Infinity War, one that doesn’t rely to heavily on musical themes previously established. This Deluxe Edition digital release presents what I believe to the more than the complete score from the film and I encourage fans to dive deeper into this marvelous symphony with this original motion picture soundtrack.