Book Review: Neanderthal Opens the Door to the Universe 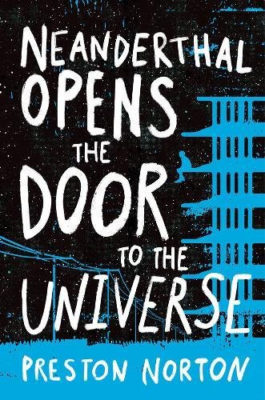 When you pick up a book with a title like Neanderthal Opens the Door to the Universe, you expect an intergalactic adventure with a prehistoric man. Instead, Author Preston Norton has crafted a uniquely human story of love, loss, loneliness, acceptance, and profound understanding. Whoever you are, whatever is going on in your life, this book will feel like divine intervention to anyone lucky enough to read it.

You can’t get much lower than Cliff Hubbard, a big and tall student at Happy Valley High who is known best by a cruel nickname given to him by popular jocks, Neanderthal. His older brother and only friend committed suicide a year prior, his dad is verbally and physically abusive, and he dreads both his school and home life. When we first meet him, he is suspended for getting into a fight with Aaron Zimmerman, the most popular quarterback at school and his top oppressor.

And then Aaron Zimmerman has a near death experience…

…in which he claims to have seen God…

…and told him that Cliff is the only one who can help.

Like anyone, Cliff doesn’t believe Aaron and assumes this is yet another cruel prank. But then Aaron quotes God as saying something that his brother told him. “Life isn’t just existing. It’s a door. Don’t you want to know what’s on the other side?” After freaking out, Cliff agrees to help Aaron with his list. All of the items are designed to improve life at Happy Valley High, including stopping a bully, putting an end to a club that uses religion to oppress others, remind a mean teacher why he got into the field, stop a gang from selling drugs, and stop a mysterious computer hacker named HAL.

Happy Valley High is turned upside down as Cliff and Aaron begin working together. But with an entire school in doubt about their mission and with Aaron’s continued health issues from his head injury, Cliff can’t help but feel like the words he said might be a coincidence and that none of this is real.

What Neanderthal Opens the Door to the Universe does so beautifully is tell a story about two teenagers who set their minds to changing the world around them for the better. The religious aspects are an undertone, with Cliff an agnostic character who doubts all of this over and over. The story isn’t about belief, it’s about finding a way to turn on the light inside people who’ve lost touch for whatever reason. And it’s a story about how we all need someone to believe in us and be a good friend every once in a while.

Published by Hyperion, this book is intended for ages 14 and up. It contains many PG-13 elements including language, drugs, and talk of sex. All of these help to make it feel more real and grounded in reality, as do the numerous pop culture references, many of them Disney related. While I’ve never seen it, readers who enjoy 2001: A Space Odyssey are likely to appreciate an added layer to the story inspired by that film.

Neanderthal Opens the Door to the Universe will make you feel every possible emotion all at once. Reading it was akin to a religious experience. This story reaches into your soul and ties it in a knot, straining out all the bad stuff and leaving you better than you were before.