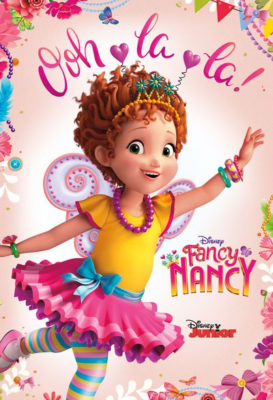 If Disney Junior’s newest animated series Fancy Nancy sounds familiar, it’s because she’s already a worldwide phenomenon. The original children’s book by Jane O’Connor was published in 2005 and since then, there have been more than 80 books published when you count all of the picture books, early-readers, and chapter books that have since been published. It’s no surprise that Fancy Nancy finally made the leap to animated series and it just so happens to be on the fanciest of networks and streaming apps, Disney Junior and Disney Now.

Nancy Clancy loves all things fancy, from layered tutus to plastic jewelry, sunglasses, and boas. She has a big vocabulary and loves to use it, occasionally stopping to explain that the big word she just used is a “Fancy” way of saying something her viewers will know. She lives with her mom, dad, younger sister, and poodle named Frenchy.

Each episode is split into two stories and in the pilot, the first segment is called “Chez Nancy.” When Nancy’s dad and grandfather build her a new clubhouse, she celebrates by inviting all of her friends. But when the final product isn’t fancy enough, she recruits her sister to help her gee it up. In the second part, “School de Fancy,” Nancy tries to show her friends how to be fancy, but is disappointed when they don’t do everything the same way she does.

The series debuted on Friday, July 13th, with two episodes. The second is called “Tea Party Trouble/Bonjour Butterfly” and the first part finds Nancy having a tea party with an heirloom teapot that breaks. In the second part, Nancy builds a beautiful cage for a pet butterfly, but finds it hard to keep a butterfly from her friends and family. 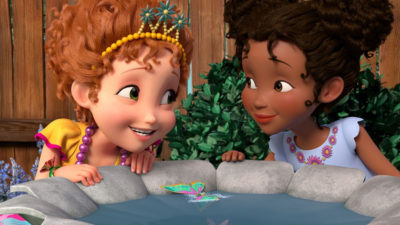 The series is full of bright colors, fun characters, and musical numbers. It never stops the plot to ask kids to participate, but definitely breaks the fourth wall a few times when Nancy stops to explain a word that may be beyond the average viewer’s vocabulary. In all cases, she breaks it down as a “Fancy” word for something simpler.

Like the beloved book series, kids are going to think Disney’s Fancy Nancy is très magnifique. Nancy will inspire viewers to be themselves and to make every day extra special. Her interests gravitate towards things that are pink and sparkly, but her personality is optimistic and friendly. Not only will kids expand their vocabulary, but they will also see a great role model for overcoming personal struggles and being a better friend.