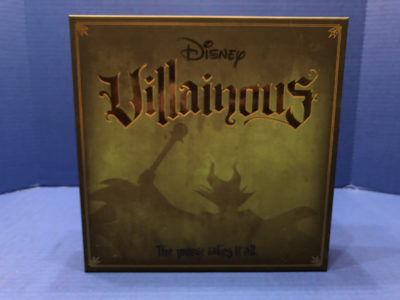 Disney Villainous is a new board game from Wonder Forge where players compete as one of six Disney villains, trying to be the first to complete their own mission while also capable of thwarting their opponents. So dust off your spell books, summon your henchmen, sharpen your weapons, or do whatever it is you need to do to be as vile and cruel as possible during an hour of foul play. Recommended for ages 10 and up, this is a perfect game for families without small kids in addition to adult Disney fans.

Rather than a traditional large board, this game uses six small boards for each villain and two decks of cards to be used independently. There are no die, but each player receives a uniquely themed pawn which they can freely move to a different location on their board once during their turn. They must always have four cards from their villain deck in their hand, which they can play during their turn according to the symbols in that location. Their fate deck is for their opponents to use when they activate effects from their villain deck or are in a location where they can twist another player’s fate. 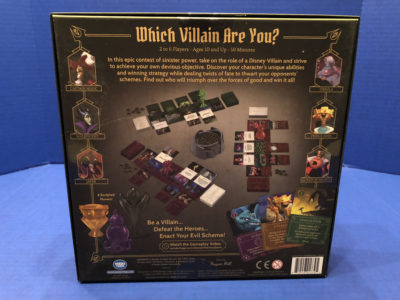 Sound too confusing? Don’t worry, the game is surprisingly easy to grasp after only a few turns and Wonder Forge also provides a link to an online tutorial in addition to a great manual with lots of images of the setup and play. Using your cards costs power tokens and you can build your collection by strategically changing locations during each turn.

The villains included are Captain Hook, Jafar, Maleficent, Prince John, Queen of Hearts, and Ursula. Each player receives a guide to their villain, which makes their individual objectives clear and also gives hints. For example, Captain Hook must defeat Peter Pan (a Fate Deck card) in Hangman’s Tree. In preparation, you can place Ally cards (from your Villain Deck) in that same location and when an opponent finds Pan, they have no choice but to play him on that same location. The objectives of each villain are different and each player also has a reference card that not only explains the symbols but also has a cheat sheet of the other villain’s goals to help you block them. Since some objectives are easier than others, those villains have one of their locations locked at the start of the game and must first unlock it before they can complete their quest.

In addition to the fun gameplay, each card and board features new artwork that is gorgeous to look at. They recreate the aesthetic and characters of each film, but with unique textures that feel original and help them all feel like they belong in this game. The box is also gorgeous, with a velvety finish and gold foil accents. I sincerely hope there’s a sequel or expansion decks in the near future.

We had so much fun playing Disney Villainous that we ended up going around three times so we could try all of the villains. The game can be enjoyed by up to 6 players and each turn is exciting to watch as players make villainous decisions against their friends and family. You’ll cackle and scream often, making this a wise choice for get togethers this fall as Halloween approaches. With so many great villains left out (Evil Queen, Lady Tremaine, Madam Mim, Hades, Dr. Facilier, Mother Gothel), a sequel or expansion set feels inevitable.

I recommend Disney Villainous to Disney fans who enjoy spending fall nights inside with cups of hot cider and a “friendly” game amongst their friends and family (Insert your best villainous laugh here).