The horror genre has never appealed to me. Ever. I can handle violence, a little gore, and the intensity of a good thriller, but creepy, spooky, mysterious killers? No, thank you. When #murdertrending made its way to me, I was hopeful that the story would fall somewhere within the lines of thriller and murder mystery. While it has those elements, it definitely leans more towards the terrifying. For someone who’s ideal level of horror is Stranger Things, Buffy the Vampire Slayer, and The Sixth Sense, (yes, I know none of these qualify for that genre), I worried that I wouldn’t be able to enjoy the book. Luckily, that wasn’t the case.

Published by Freeform Books, I knew right away #murdertrending would include some darker, edgier and more intense material. Even Freeform’s network slogan, “A Little Forward” clues you in that theirs is not the average “family” content. With its target audience being young adults, it makes sense to aim for something cooler and a little more grown up. So it’s safe to assume their publishing label would follow suit. And boy to they. 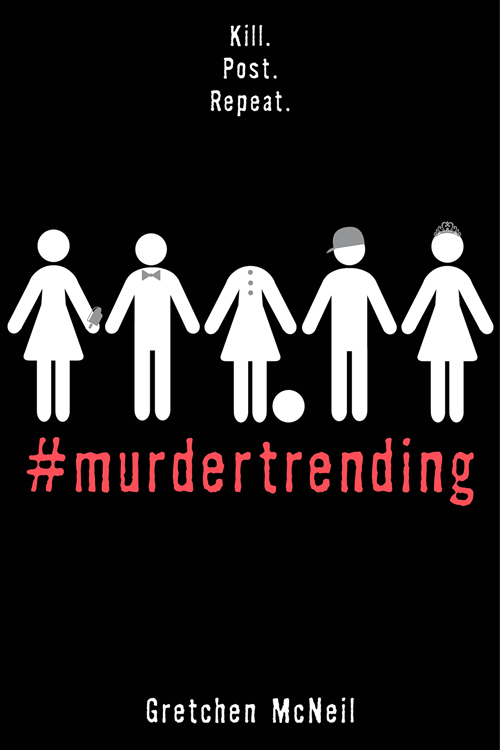 Author Gretchen McNeil tells the story of 17-year-old, Dee Guerrera, a high school senior who’s wrongfully accused of killing her step-sister. Instead of being given the death penalty, Dee is sentenced to a fate much worse. To pay for her crime, she’s to be incarcerated on Alcatraz which has been refurbished, updated, and turned into a functioning prison renamed Alcatraz 2.0. There she and the other inmates–in no particular order–will be killed in a variety of obscene ways by government-sanctioned serial killers. Makes the death penalty sound kinda nice, no? Oh, yes, the trending part of the title. Alcatraz 2.0 has been equipped with cameras all over the island that live stream everything in real time to viewers all over the country. Including the prisoners’ murders.

Alcatraz 2.0 is the brainchild of a character known only as The Postman. The Postman has convinced the president, (a former reality star) to revamp the old prison island and live stream deaths of convicted, dangerous murders to paying audiences. The shockingly rapt audience eagerly participates in chat rooms, forums, and Twitter-style conversations on multiple platforms run by The Postman. Their responses to content are considered “spikes” which increase ratings. It’s always about the ratings. Private channels are dedicated to each prisoner, who also have their own homes on the island that are visible to audiences 24/7. The serial killers have fan pages and go by unique monikers like Gucci Hangman and Hannah Bell to depict the ways they prefer to kill their victims. If all of this wasn’t enough of a shock, the live feeds of Alcatraz 2.0 are also broadcast to the prisoners so they don’t miss a moment of the action.

We meet Dee as she wakes up alone in a cell on the island. She’s been provided with a princess dress for what’s supposed to be her only appearance on the live stream. Dee’s to be murdered immediately by Prince Slycer. However, Dee shocks viewers, The Postman, and herself when she takes him out before he can kill her, earning the nickname #CinderellaSurvivor. From here she meets Nyles, another prisoner whose case is in appeal thanks to a relative who’s a government official. Nyles has temporary “diplomatic immunity” meaning he can’t be killed. He introduces Dee to other prisoners and explains what she should expect from life on the island and how some inmates have managed to survive. While Dee’s advised not to trust anyone, if they can work together they might have a chance to get off the island.

As mentioned above, the content of this story is intended to be more adult and shocking and that includes language. While it didn’t affect my enjoyment, I was surprised by the number of expletives. #murdertrending is geared for teens aged 14-18 and contains over a dozen uses of the F-word, and at least as many S-words. Of course the uses are out of frustration regarding their situation and not as descriptors, but still it seemed like a lot. All that aside, McNeil has crafted a surprisingly interesting and horrifying story.

I struggled to get through the first several chapters, but once things began to take shape, I found myself very intrigued. McNeil cleverly divides Dee’s tale into her present experiences and her traumatic past which she thinks might be connected. And along those same lines, chapter events are masterfully complete or split just enough to keep readers from putting the book down. While I don’t plan on embracing the horror genre anytime soon, this story was interesting and well crafted. I give #murdertrending 4 out of 5 spikes.