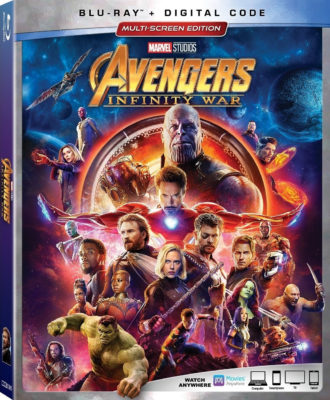 Avengers: Infinity War dominated the worldwide box office and shocked fans. There are surely moments in the film that foreshadow what’s to come in the second part and now you can pore over every detail with the Blu-Ray release. With so many characters and eighteen films leading into this blockbuster, fans will want to watch it again and again.

As Doctor Strange says, “The fate of the universe is at stake.” Thanos becomes an unstoppable force as he continues to collect Infinity Stones, several of which are on Earth. Not only does it require the Avengers to assemble, but they must also partner with unlikely teammates from Wakanda and beyond.

The Russo Brothers returned to direct this juggernaut after proving that they could make sense of a film with too many characters on Captain America: Civil War. Once again, a film that should have gone off the rails due to the sheer size of its cast is kept on track and maintains excellent flow thanks to these creative masterminds. Infinity War proves that Civil War was more than just a lucky strike.

Iron Man, Captain America, Thor, Black Panther, Bruce Banner, Doctor Strange, Black Widow, Hawkeye, Scarlet Witch, Vision, Spider-Man, and the Guardians osf the Galaxy all come together in their quest to stop the unstoppable Thanos. The list of characters from the MCU that aren’t in this film is shorter than the list of those that are, but it impressively never loses track of the main throughline. If it has a fault, it’s that this is the first of a two-part story and the cliffhanger ending makes it feel like an incomplete experience.

With hours of bonus features, including some digital exclusives, fans can dive deeper into the creative process of one of the year’s biggest films. This review covers the Blu-Ray/Digital combo pack. Other options include a 4K/Blu-Ray/Digital release and a standalone DVD, the only way to get a standard-definition disc. Those looking for exclusive packaging will find it from Target (Gallery Book Edition) and Best Buy (Steelbook Edition).

Digital Exclusives – The following bonus features can be accessed through the included digital copy.

The Blu-Ray release offers a beautiful transfer where the film’s many dark scenes are handled with care. The most colorful moments come from the space sequences, which are vibrant and pop off the screen. The 4K release likely offers some improvement, but it’s a perfect example of Blu-Ray done right.

The primary audio mix is a 7.1 DTS-HD Master Audio mix that makes full use of the sound spectrum, enveloping the audience in their home theater. Other audio options include English 2.0 Descriptive Audio, French 5.1, Spanish 5.1, and Portuguese 5.1.

Avengers: Infinity War arrives on Blu-Ray in a standard-sized case with a holofoil embossed slipcover in its initial pressing. Inserts include a digital copy code redeemable through Movies Anywhere (also redeemable for 150 points through Disney Movie Rewards) and a flier for Disney Movie Club. For an overview of the packaging, check out our unboxing video.

Avengers: Infinity War arrives on Digital HD with some worthwhile bonus features that explore the making-of process and celebrate ten years of Marvel Studios. Nearly all of the contents will be available on Blu-Ray on August 13th, but super fans have a two-week edge with this digital release, including some exclusives.