Los Angeles has a problem — and in West Coast Avengers #1, Kate Bishop is trying to find the solution. Facing a lack of superheroes to defend the streets of L.A., Bishop, also known as Hawkeye, fights off an invasion of land sharks and realizes that she can’t save the streets of L.A. on her own. 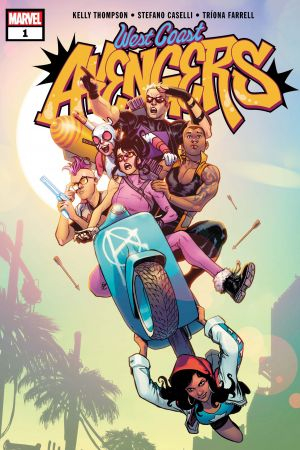 After working with Clint Barton, the first Hawkeye, Kate starts interviewing heroes to join her squad. Her choices are limited, and she settles for Gwendolyn Poole, Quentin Quire, her boyfriend Fuse, America Chavez, and Barton when he is around.

Now formed, they venture off to an emergency, only to confront a 200-foot-tall version of Tigra, a member of the old West Coast Avengers. Not wanting to hurt their friend, the group of heroes is left wondering what to do when a mysterious hero named B.R.O.D.O.K joins them.

I have always enjoyed comics that have a simple story. I also like a series that tells a long story, like Civil War, or Secret Empire, but sometimes a simple story is all I need, without having to think too much about complex plot lines. Sometimes comics should be simple fun and entertainment.

The fun aspect of West Coast Avengers #1 is what I enjoyed the most about this comic. It doesn’t take itself seriously, but having Kate Bishop be the lead, was a great choice. Bishop as Hawkeye is a normal everyday person, who just happens to be good with a bow and arrow. She has talent, and she has hopes. Her desire to form a group that will protect LA is admirable, something anyone would want to do, and she connects with the reader because a reader can identify with the frustration she feels towards her friends and life.

Having Clint Barton lends a connection to the New York heroes and provides some stability to the unknown world of LA for Kate. Her group of West Coast Avengers is a mix of eclectic heroes who have needs. The biggest one is being paid. That’s the problem that Kate Bishop has. She is not independently wealthy. They must find a financial backer.

Framed around the idea that the team is being interviewed for some sort of television or film production, we see the personal sides to the characters, and we get to laugh along at some of the absurdity of the comic world. The running joke of having two Hawkeye’s is funny, and not overused, and the friction between the characters is enjoyable and expected with this ragtag group of individuals.

One of the reasons I enjoyed West Coast Avengers #1 is that despite the fact it’s a comic book about super heroes and villains, the problems the characters face are everyday issues. The idea of trying to do something good is what makes Kate likable. Leading up to the battle with the giant Tigra, the new group of heroes are confronted with battling a ‘friend’, and trying to minimize hurting her, but also protect the city.

The one problem I had with West Coast Avengers #1 is the ending. There was nothing wrong with the debates about the level of force the group uses on Tigra, or that they all seem to be a group of heroes you would call as a last resort. It was the introduction of B.R.O.D.O.K. that really let the air out of the story.

Writer Kelly Thompson had developed a highly enjoyable story that ended with a strong female character being swept off her feet by the blond long haired male adonis that B.R.O.D.O.K. seems to be. I hope that B.R.O.D.O.K. has a point that is important and relevant to the West Coast Avengers storyline.

I rate West Coast Avengers #1 3 Arrows out of 4. The comic is a fun story about misfits trying to make a go of their life and use their abilities for good. The story derails at the end because I really didn’t like B.R.O.D.O.K. He seemed to be pointless and seemed to reduce Kate Bishop to a damsel in distress. I trust there will be a point to his motivations and hope to see Bishop maintain her authority, and lead the West Coast Avengers to success.