The Storm Runner by J.C. Cervantes is an action-packed adventure about a young boy who realizes that his supposed ‘disability’ which has been holding him back his whole life, will make him great. In the second book to be released under the Rick Riordan Presents imprint at Disney/Hyperion, Cervantes, in the vain of Riordan’s past mega selling novels about Greek and Roman gods in the modern world, shines a light on the Mayan traditions and the gods that make up this rich mythology of Latin America. 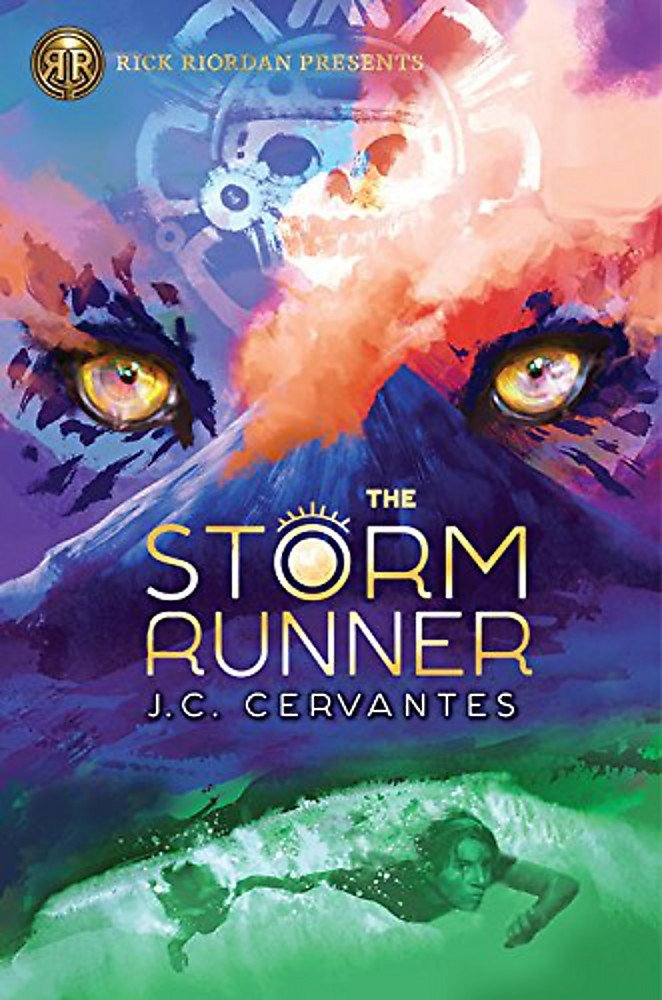 Zane Obispo is a normal teenage boy, who just happens to live next to a volcano in the desert of New Mexico. Living with his mom, and uncle Hondo, Zane has spent the last year being homeschooled after a bullying incident. Now about to be sent to a prestigious private school, Zane is filled with worry, because he fears how his classmates will treat him. Being teased for a limp because one leg is shorter than the other, Zane has always been conscious of how people act towards his disability. Hearing names like ‘gimp’, and ‘sir limps a lot’ has hurt Zane and forced him to seek a life of solitude.

His first day at his new school, Holy Ghost, brings him into conflict with bullies and introduces him to a girl named Brooks. Brooks will introduce Zane to a whole new world, one where Mayan Gods, a fated prophecy, and a battle against the Mayan God of Death Ah-Puch will challenge him.

From learning the truth about Brooks, to accepting his role in fighting Ah-Puch, Zane learns much about his culture, the strength of his family, the identity of his long-lost father, and that a disability can be used to accomplish great things.

One of the goals of the Rick Riordan Presents imprint at Disney Hyperion is tell stories about different cultures, while promoting authors with a connection to that culture, thus enriching readers.

The Storm Runner is the second book to be released under this banner, and I had some question as to whether the strong start the imprint had from the first book it released, Aru Shah and the End of Time, could be sustained. I am pleased to say that The Storm Runner is another home run hit for the Rick Riordan Presents label. Not only does The Storm Runner entertain readers with a fun filled action packed story in the vain of Riordan’s own work The Lightning Thief, author Cervantes enlightens readers about the cultural mythology of the Mayan world, which many reader’s will want to learn more about.

Cervantes has a difficult task in her story, because not only does she need to make an entertaining narrative, she must inform us about the history of Mayan beliefs, without turning the book into a textbook. Her vessel for us to learn about these gods and their ancient actions, is Zane Obispo, and through his own learning, we readers are educated as well.

Zane is entertaining, intelligent, and funny, all the ingredients you need to make the narrator of the story engaging and keep the reader’s attention. Cervantes is masterful in her storytelling. She walks a tight line of entertainment and education.

Zane is the cause of and solution to the threat of Ah-Puch. He only has a few days to save the world and must rely on Brooks, his Uncle Hondo, and a string of other characters, including his father, the Mayan God Hurakan.

Zane has multiple enemies in The Storm Runner, but the biggest enemy he faces is himself. He constantly believes he is not good enough because of his leg, which has held him back in many ways. His battles with bullies, and the ability to isolate himself at home, only associating with adults, has instilled a fear of failure in Zane.

Having not grown up with a father, Zane has built up a resentment for the god when he meets him. The questions of why he left were never answered because Zane’s dad couldn’t be a normal parent. For Zane to be successful in this book, he must believe in himself. This is what I truly loved about The Storm Runner; the message of the book is to believe in yourself. Abilities are different for everyone, and to simply cast yourself down because you may look different or walk differently than others doesn’t mean that you can’t accomplish great things.

The Storm Runner is also about the strength of family. While Zane has felt afraid of school and bullies, he has always had a strong supporting family. From his mother who has protected him his whole life from the dangers of his Mayan heritage to the fearlessness of his Uncle Hondo rushing in and fighting off demons like it wasn’t a big deal, Zane’s family has always been there for him when he needs them. His father Hurakan, waits until Zane is in the Old World to claim his as his son, not because he doesn’t love Zane, but because this will imbue Zane with the powers that come with his lineage so that he can defeat Ah-Puch, even though it puts Hurakan in danger.

J.C. Cervantes has a platform in her novel where she can make readers, the young adult audience that will flock to this story, learn about being better people. From helping to illuminate a world that is often overlooked, to tackling a bullying issue head on, Cervantes is doing great work with her book. The Storm Runner is not just another Percy Jackson book. Rather, The Storm Runner is a book that will continue the trend of the Rick Riordan Presents label of breaking down barriers, opening people’s minds to other cultures, while providing highly entertaining books for kids. My children are 7 and 5, and though they are a little young for the subject matter of The Storm Runner, this book will be waiting for them, and I can’t wait for that day.

If you are looking for an action-packed novel, The Storm Runner is for you. If you want a snapshot of how cool Mayan mythology is, read The Storm Runner. J.C. Cervantes has done a masterful job in giving a glimpse of this unique and magical world.

I highly recommend The Storm Runner and rank this book as 4 exciting exploding volcanoes out of 4.