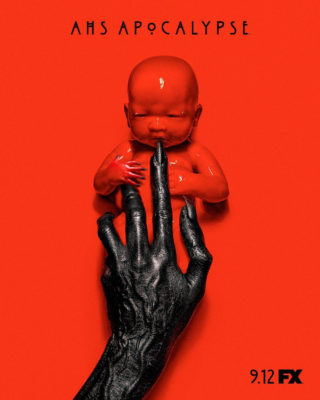 Once more unto the breach, American Horror Story has returned! Longtime fans are sure to be over the moon with the series return to form after last years stark foray into realism with AHS: Cult. The supernatural spookies are back and so are all of your favorites. This year’s installment, American Horror Story: Apocalypse, opens on Cult alum Leslie Grossman as a vapid social media influencer getting caught up in the commotion of the incoming nuclear missile attack. She brings her hair dresser, played by series regular Evan Peters, and her personal assistant Billie Lourd. Peters Nana is brought into the mix, giving Joan Collins an opulent introduction to the series. The group races to Grossman’s family jet to escape the blast leaving her boyfriend Billy Eichner behind. Ryan Murphy has a way of whipping the audience into a frenzy before dropping the unsettling theme song on the audience.

We’re introduced to the main conflict through a middle-class family being torn apart before the blast by mysterious men and women in black that work for The Cooperative, a shadowy organization. Their focus is a young man played by Horror Story newcomer Kyle Allen, who supposedly has prime genetics that they found through an ancestry website’s data. Every season of American Horror Story finds a way to hone in on current scandals or trends, so it’s no surprise that the scandal surrounding DNA websites would find its way into the Murphy zeitgeist. From there, we’re introduced to Ash Santos’ character who was taken from prison and will clearly be romantically tied to Allen’s character. They’re transported by futuristic plague doctors to the real stage for the season; an underground bunker that used to be a secret boys school that looks like the set of a 90’s era Madonna music video. 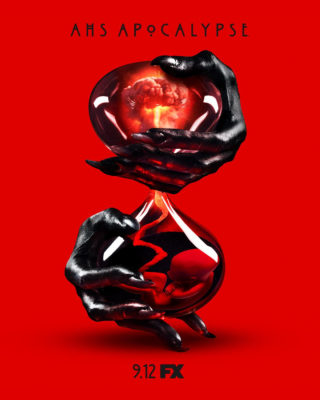 Sarah Paulson has a habit of stealing every season and returns in full force as Wilhemina Venable, who has the potential to be her creepiest reincarnation yet! Venable is the bunker matriarch, she’s stone-faced and as strict as her high collar suggests. She stalks through every scene with a cane that harkens back to Asylum’s Sister Jude. In the bunker, we get a taste of Kathy Bates’ long-awaited return.  Her presence was missed greatly in Cult and she’s back with a serious undercut and a gothic flare. Freak Show’s Amazon Eve, played by Erika Ervin, has also been snuck into the background as a henchwoman.

The bunker has strict rules and a class system based on colors. Purples are upper class and grays are servants. The wealthy family from the plane, Adina Porter’s Oprah parallel, Unreal’s Jeffery Bowyer-Chapmen, and the lucky, yet unfortunate kidnapped few, are purples. Billy Lourd is not. Rations are scarce and tensions run high when they have a contamination scare that leads to the sinister revelation that things are not what they seem. The show has a significant time jump in the last ten minutes and brings the highly anticipated reveal of season one’s baby anti-christ, Michael Langdon, whose adult presence is realized by House of Cards‘ Cody Fern.

The gang’s all here and the season’s opener has set up the potential for another unsettling and disturbing ride. American Horror Story: Apocalypse presents Asylum’s sterile dread and marries it to the glamor of Coven. The show hasn’t even introduced the characters from Coven teased in promotional material, but it may be smarter for Murphy to keep those cards closer to his chest for the time being. The first episode may be convoluted, but convolution is no stranger to the series and its fans. American Horror Story: Apocalypse could be the diehard fan’s ultimate romp. It’s still too early to tell, but judging by the suspense building in the first episode, a romp is likely to be an accurate description of the season. If only Lady Gaga could return for another iconic role…