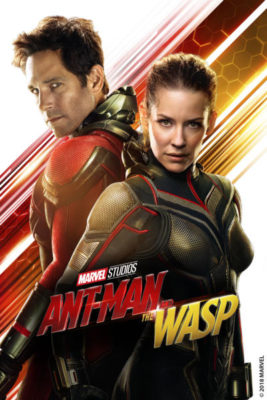 Marvel Studios’ Ant-Man and the Wasp, the 20th film in the Marvel Cinematic Universe, offers a sequel to one of the most unlikely superhero films ever brought to the screen. Like all films in the MCU, it combines compelling characters with great storytelling, yielding yet another memorable and fun experience. At first glance it appears to be a sequel to 2015’s Ant-Man, but it’s essential that viewers also watch Captain America: Civil War to fully understand everything that’s happening.

Scott Lang is under house arrest, which ends in just a few days. But when Hope Van Dyne and her father Hank Pym abduct him, he is once again caught up on an adventure of both epic and miniature proportions. When Hope’s mother, Janet, plants memories in Scott’s head, he is the only one who can help them bring her back from the Quantum Realm.

One of the biggest differences this time around, as the title suggests, is that Hope is now donning a suit of her own and has taken over her mother’s alias, the Wasp. It was set up and teased in the first film, but comic fans finally get to see her on screen for the first time. Her ability to fly at a micro scale adds a new level of impressive visuals and excitement to the series.

In addition to Scott’s need to wrap up the mission to save Janet due to his house arrest, he is also thwarted by another character named Ghost. She needs the quantum tunnel, the only way to get Janet back, in order to stop her from phasing out. And they are all pursued by a gangster who makes his trade in expensive and rare tech.

In addition to turning Ant-Man into more of a team-up film, Ant-Man and the Wasp also continues the MCU’s tradition of attracting top talent and legendary actors. To be specific, it brings Michelle Pfeiffer into the Marvel franchise as Janet Van Dyne, the original Wasp. This is significant because it’s Pfeiffer’s first superhero film since 1992’s Batman Returns, one of my favorites. It also adds a layer to MCU history, making a statement that women have been heroic in this universe for a long time, a theme that will be reflected in the next film, Captain Marvel.

Ant-Man and the Wasp is now available digitally from all major providers. Fans holding out for an on-disc release will have to wait until October 16th to add it to their collection, while it can be yours right now if you’ve already switched to digital.

Ant-Man and the Wasp is a showcase of how the Marvel Cinematic Universe allows each film to change its tone, style, and approach to storytelling. It’s a compelling story with hilarious moments and impressive visuals, one of the most entertaining films of 2018. Enjoy this lighter, fun break from the dark and serious tone that is on the horizon in the exciting conclusion to Avengers: Infinity War.