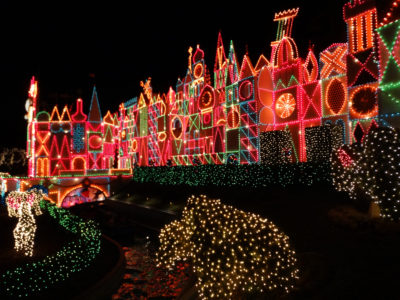 Is there a better time to be at Disneyland than Christmas season? Well, maybe Halloween Time, but it’s certainly up for debate. This past Friday, the 2018 Holidays at the Disneyland Resort annual event took over the Happiest Place On Earth, and I spent the day exploring both parks to see what kind of festive fun this year has to offer.

I spent the early part of the day exploring the holiday decorations around Main Street USA, picking up a highly sought-after Toy Story-inspired Little Green Men Santa popcorn bucket, and checking out the Ralph Breaks the Internet sneak peek in Tomorrowland (see the tweets embedded below), but after lunch it was time to camp out for the popular “A Christmas Fantasy” parade in the hub.

The parade features appearances by Disney characters of all stripes, including Woody and Buzz Lightyear from Toy Story, a gaggle of Princesses, and of course Mickey Mouse and friends. And kids visiting Disneyland for the holidays will be thrilled to see Santa Claus himself bringing up the rear float.

Once darkness settled, I was ready to experience one of my favorite Christmastime traditions at Disneyland: the amazingly colorful overlay It’s a Small World Holiday in Fantasyland. In this annual yuletide-themed makeover of one of Walt Disney’s classic attractions, animatronic children from countries around the world celebrate the season the only way they know how: by singing!

This is just a small fraction of the jaw-dropping amount of activities available around Disneyland Resort during the Christmas season, so don’t forget to check back here at Laughing Place for coverage of the “Believe… In Holiday Magic” fireworks show, Festival of Holidays, and Viva Navidad!

Holidays at the Disneyland Resort runs from now through Sunday, January 6 at Disneyland, Disney California Adventure, and the Downtown Disney District in Anaheim, California. For more information, be sure to visit the resort’s official website.

Sleeping Beauty Castle is snowy for the season. @Disneyland pic.twitter.com/2jIj5ZXP5O

The line for the #ToyStory Little Green Man popcorn bucket is long, but there’s still a bunch left! @Disneyland pic.twitter.com/iV3HDT02iv 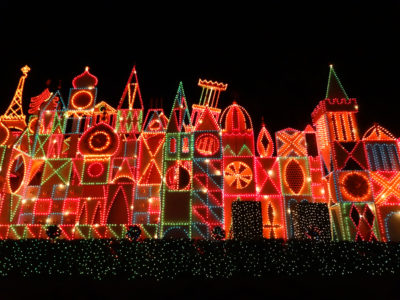