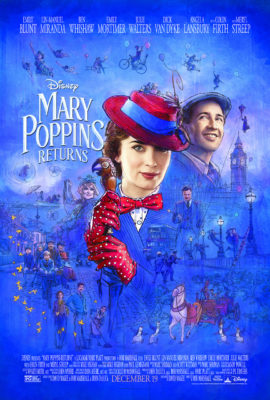 It’s been 54 years since audiences first watched Julie Andrews touch down on Cherry Tree Lane in Walt Disney’s Mary Poppins, heralded as the finest film of his producing career. The road to a sequel has been long, bumpy, and tumultuous, but at long last the “Practically perfect” nanny is ready to come back and lift your spirits. Mary Poppins Returns is nothing short of a gift to the world and a must-see moment in cinematic history.

The plot is very much the same, with Mary Poppins magically arriving out of thin air to help the Banks family through a series of magical adventures. As before, the lessons the kids bring home from their outings have an indirect impact on their father. But this time, the father is Micheal Banks grown up, as this sequel is set twenty-some years after the original. While the film sings and dances through familiar story beats, it feels refreshing and new at the same time.

You don’t realize how much your heart has needed a sequel to Mary Poppins until about a minute into the film as Lin-Manuel Miranda is taking you on a singsong bike tour of London. The camera pans up Saint Paul’s Cathedral as the music swells and suddenly your eyes fill with tears of joy, your entire body covered in goosebumps. It’s the first of many similar moments in the film that continuously strum your heartstrings for two glorious hours. 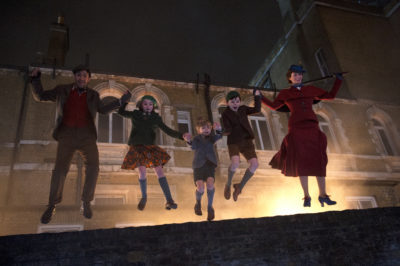 The music by Marc Shaiman and Scott Wittman fits perfectly among the Sherman Brothers classics from the original film (Richard Sherman served as a consultant). Many of the Sherman Brothers melodies find their way into the score as nods to the original film, but you’ll walk away with many of the new songs stuck in your head. “Can You Imagine That?” is unforgettable and “The Place Where Lost Things Go” is perhaps the most touching moment in any film this decade. Nothing will ever top the “Step in Time” musical number, but “Trip a Little Light Fantastic” gives it a run for its money.

The new film breaks tradition by filming outdoors and changes the aspect ratio to a wider format. It establishes an even mix of trying to look like the 1964 film and trying to have its own unique visual identity. However, it’s surprising how much the film ends up feeling like the original, despite numerous changes to the set design, costumes, and an almost completely new cast (Navckid Keyd returns to play Mr. Dawes Jr.). Even the animated sequences, for all its computer trickery, feels closely related to the chalk drawing “Jolly Holliday” sequence. 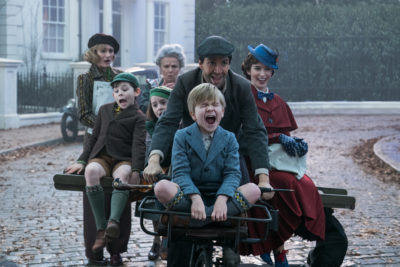 Can you imagine anyone other than Julie Andrews playing Mary Poppins? Neither could I, but Emily Blunt puts her own spin on the character and gives a bewitching performance. Lin-Manuel Miranda is a radiant delight as Jack, a Bert-like lamplighter. Emily Mortimer is inspired casting as grown-up Jane, while Ben Whishaw becomes the emotional anchor of the film as grown up Michael, whose performance is one of many unexpected surprises in the film. Meryl Streep adds a healthy dose of humor to her scene, while Angela Lansbury sends audiences away like a goodnight kiss with imagery that will stay with you forever.

What Director Rob Marshall has done with this production is… well… the only appropriate word is Supercalifragilisticexpialidocious. After just one viewing, I can definitely say that Mary Poppins Returns is the best film of this decade, Disney or otherwise. Gather your loved ones and head to the theater this holiday season to share in one of the most magical moviegoing experiences you will ever have. Off you go!

I give Mary Poppins Returns 5 out of 5 cracks in a Royal Doulton ceramic bowl.