Book Review – “Star vs. the Forces of Evil: The Magic Book of Spells”

Tags: Disney Books, Review, Star Vs. The Forces of Evil 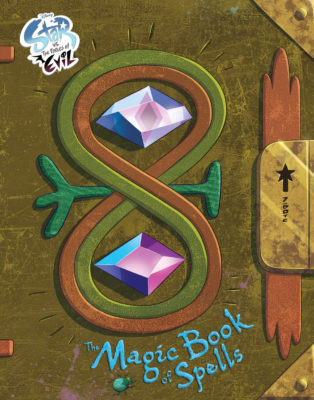 Fans of the Disney Channel animated series Star vs. the Forces of Evil will be very familiar with Star’s “Magic Book of Spells.” The good news is that now they can bring it home to obsess over the secrets that can be found within. Similar in both size and content to the Gravity Falls Journal #3, Disney Press is happy to feed your fandom with books from the shows you love.

This book is just as much about the history of Mewni and the Butterfly family as it is a book of spells. It has been treated like a journal throughout time by the queens of Mewni and each adds their story, pictures, and spells in short chapters. Devin Taylor and Daron Nefcy provide the illustrations in this stylized book that captures the esthetic of the animated series.

Thirteen queens are presented from Skywynne Queen of Hours through Star the Underestimated. The font changes for each section to make each page look handwritten. The style of writing and chapter structure also change drastically to match each queen, yielding some really hilarious outcomes.

Star vs. the Forces of Evil is inspired by many pop culture moments and you can see many of them in this book. The wands and sometimes even the hairstyles are very reminiscent of Sailor Moon. The pony head people in many ways feel like a bizarre twist on My Little Pony. And many of the queens have more than a few things in common with a few classic Disney Princesses. Star has added her notes to some of the pages and is collecting a trading card game based on each queen that bear a resemblance to the Pokemon card game.

I haven’t been an avid viewer of Star vs. the Forces of Evil, which made this book a little hard to read at times. Thanks to Disney Now, I was able to revisit the show a little bit before diving into this review. However, both the series and this book aren’t as enthralling as Gravity Falls and its impossible not to draw similarities between this and Journal 3 since they are so similar in size and content. But comparing the two, Journal 3 offered a genuinely fun experience whereas The Magic Book of Spells becomes repetitive after a certain point and appeals to a smaller group of fans.

If you or your kids love Star vs. the Forces of Evil, then this is an obvious must-have and a perfect gift for them. But more casual viewers won’t enjoy it as much and will find it hard to finish. It provides a few laughs, but retreads the same water for the bulk of its thirteen sections.