It was the second highest-grossing movie of 1988. Its characters have appeared in theatrical shorts, comic books, and Disney theme park attractions. It made “Toontown” a household word. So in the wake of its 30th anniversary, why hasn’t there ever been a feature-length sequel to the cartoon crossover mystery film Who Framed Roger Rabbit?

In an interview with Yahoo Movies this week, Director Robert Zemeckis (also renowned for making the Back to the Future trilogy, Contact, Forrest Gump, and numerous other acclaimed hits over the past four decades) claims there isn’t much hope for a second go-’round with Roger Rabbit, his wife Jessica Rabbit, Benny the Cab, Baby Herman, and private detective to the ‘Toons Eddie Valiant. Apparently, he doesn’t think it fits into Disney’s current strategy for which projects the powerhouse media conglomerate chooses to pursue. 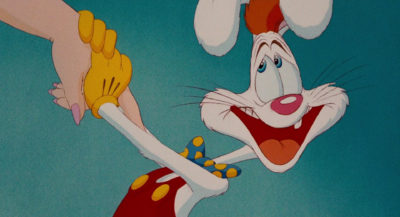 The script Zemeckis is referring to would have moved “the story of Roger and Jessica Rabbit into the next few years of period film, moving on from film noir to the world of the 1950s,” though there have been other Roger Rabbit sequel and prequel screenplays in existence prior to that, including one called Who Discovered Roger Rabbit and a buddy comedy called The Stooge which would have co-starred Mickey Mouse. Going way back to 1989, a young screenwriter named Jeffrey Abrams (now known as J.J.) had outlined a sequel under the supervision of Zemeckis and producer Steven Spielberg that was eventually abandoned.

So why can’t a Who Framed Roger Rabbit 2 get off the ground? Unfortunately, the original film’s live-action star Bob Hoskins passed away in 2014, so it would be impossible to reunite the entire cast. But voice of Roger Charlie Fleischer (Zodiac) is still kicking around, and otherwise it seems like a no-brainer. Maybe families today wouldn’t remember or care who Roger and friends are. Like Mr. Zemeckis says, they’re not princesses. Nor are they superheroes or Jedi knights. But Disney surely knows there’s still room for loving tributes to good old-fashioned animation.