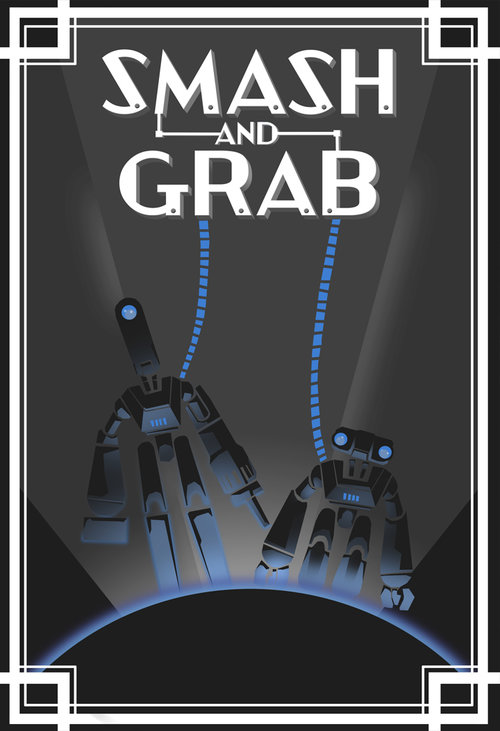 Smash and Grab is the second Pixar SparkShorts project to get a release, which debuted at the El Capitan on January 18th along with two other shorts in the collection. The SparkShorts series is designed to develop talent at Pixar by giving more artists the opportunity to create their own original short film.

Fans of WALL-E will feel instantly welcomed into the world of Smash and Grab, which takes place either on another planet where robots are responsible for mining precious natural elements, or on a very dark version of Earth. The short is told entirely in pantomime, with no dialogue, giving it another WALL-E-esque connection.

After establishing the main concept visually, we are introduced to two robots inside of a train. One uses his hammer hand to smash rocks and knock them closer to the other robot, who grabs them and puts them in the boiler. They are powered by cables that connect their backs to the roof of the engine car and when they try to high five each other for a job well done, they find that they can’t reach the other.

Through a window on the train, they can see other robots like them on a giant ship, the next destination for the minerals on the train. They use those same minerals as a portable power supply, so Smash gets the idea to smash his power cable and break free in order to get minerals for him and his friend so they can have fun, too.

Similar to Purl, Smash and Grab has a clear message inspired by a major societal issue. However, it handles it far more delicately and with a lot more subtlety. This story about two workers who don’t get the same luxuries as those who control them also doesn’t present a sugary solution to a problem while ignoring others. Smash and Grab may find a way to get what they want, but the resolution of the short isn’t applicable to all situations.

Of the three initial shorts in the first wave to be released, Smash and Grab feels the most like what you expect from Pixar. The story is relatable with uniquely human emotions applied to characters that otherwise wouldn’t have them. But at the same time, it feels detached. It’s fitting that it’s ultimate destination is the web because it reminded me of Blank in many ways, which was a stop motion short based on the now defunct Vinylmation craze. Smash and Grab makes its YouTube premiere on February 11th.

I give Smash and Grab 3 out of 5 glowing blue rock balls.