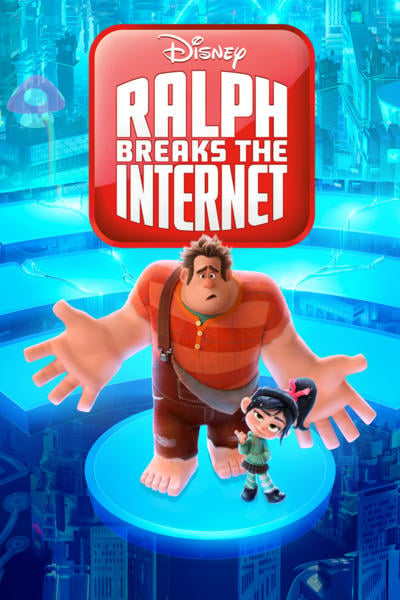 Ralph Breaks the Internet was an unexpectedly refreshing sequel with a brilliant viral ad campaign. But audiences were surprised to find that it tells a story not often featured in family films, animated or otherwise. Now you can bring it anywhere you go with a digital release, as long as you have access to wi-fi, that is.

Vanellope has grown tired of the three tracks in her Sugar Rush game, but when Ralph tries to build a new track, the game accidentally breaks. When the arcade is connected to wi-fi, Ralph and Vanellope decide to venture into the Internet to find eBay and get the broken part. But once there, they find a world with so many options that they may discover things about themselves that will change their friendship forever.

One of the most hilarious moments for Disney fans comes from a sequence where Ralph and Vanellope visit OhMyDisney.com. In addition to having fun with all of Disney’s brands, Vanellope comes face to face with some of her fellow Disney Princesses. Best of all, what seems like a short joke ends up paying off when Vanellope finds herself having her version of a Disney Princess story arch.

Another fun surprise is a new musical number by Alan Menken, giving Vanellope her own twist on a Disney Princess “I Want” song. There are plenty of other jokes, including bringing the world of TRON into Ralph’s arcade, but it’s a surprisingly heartwarming film, just like Wreck-It Ralph. It also takes a closer look at Internet culture and how much value is placed on empty likes.

Ralph Breaks the Internet hits store shelves on February 26th, but digital adopters can take it anywhere the Internet goes with this Digital HD release. It includes all of the bonus features that will be included on the physical media releases, plus a digital exclusive. A word of advice: Stay through the credits.

The Digital HD presentation looks glorious. Bright colors and dark moments are handled well, with no visible glitches or pixelation (other than the intended ones relevant to the plot). There are so many details in the film and you can see them all rendered with care.

The 5.1 Dolby Digital mix immerses you in the center of the action. A great demo sequence is Ralph’s arrival at OhMyDisney where ships from Star Wars fly from the rear of the theater to the front while other iconic sound effects from Disney brands can be heard from their respective corners.

Ralph Breaks the Internet takes the characters and spirit of Wreck-It Ralph and creates something new and different. It’s funny, but also heartfelt and unique, telling a story that feels fresh and untold in the animated medium. This digital release allows fans the chance to own the film a few weeks before Blu-Ray and comes with a digital exclusive.