In January of 2017, the Star Wars Guided Tour was launched to really focus on Disney’s Hollywood Studios, with it being the current and future home of all things from a “Galaxy Far, Far Away.” I was lucky enough to take part in one of the first of those tours, which you can catch up on HERE, but recently Disney invited some local media to take part in the tour as the park starts to ramp up for Star Wars Galaxy’s Edge opening later this year — and I have to say, I loved it even more the second time! Not a lot of things have changed from the early days of this tour other than the closure of Great Movie Ride and the Dessert Party is not included, but by far one of my favorite things that was added was getting to enjoy Star Tours before the park opened. As our tour guides Darion, Hannah, and Kaitlin lead us into the queue of the attraction, they told us backstories of how the attraction came to be and its changes over the years. As we entered the first room, we noticed something was very strange…there was no sound. As we stopped next to the Starspeeder 1000, they pointed out some fun Easter eggs on the pipes between the walkway. I won’t spoil it, but next time, make sure you take a close look and shared some knowledge about the attraction that the average guests may not know. Proceeding to the next room, we learn about the REX, the pilot of the original Star Tours and him being defective, and the G2, goose droids with their backstories going back to the Disneyland attraction America Sings. The true highlight of our visit was being able to board our Starspeeder 1000 with the lights on and being able to see how large the room is. We also got a bit of information on how the attraction really works – sure backstage stuff. After a quick trip to Hoth and Naboo (where I finally got to see the scene of our Starspeeder hitting Jar Jar), we were off to a private viewing of Star Wars Path of the Jedi. This was also very special because currently this film is only open on a seasonal basis, which means only guests on this tour are able to see it at this time. For those of you not familiar with Path of the Jedi, it follows the Skywalker lineage from Episode I  right through to Episode VIII, giving those guests that might not be the biggest Star Wars fans a great look at the story so far. Once we were all caught up with the saga, it was time to visit some old and new friends along with Kylo Ren at Star Wars Launch Bay. After some unclose encounters, we popped out of Star Wars Launch Bay just in time to catch the “parade” of characters returning from the Star Wars A Galaxy Far, Far Away stage show, including a cameo by a little porg Rey picked up on her way back. 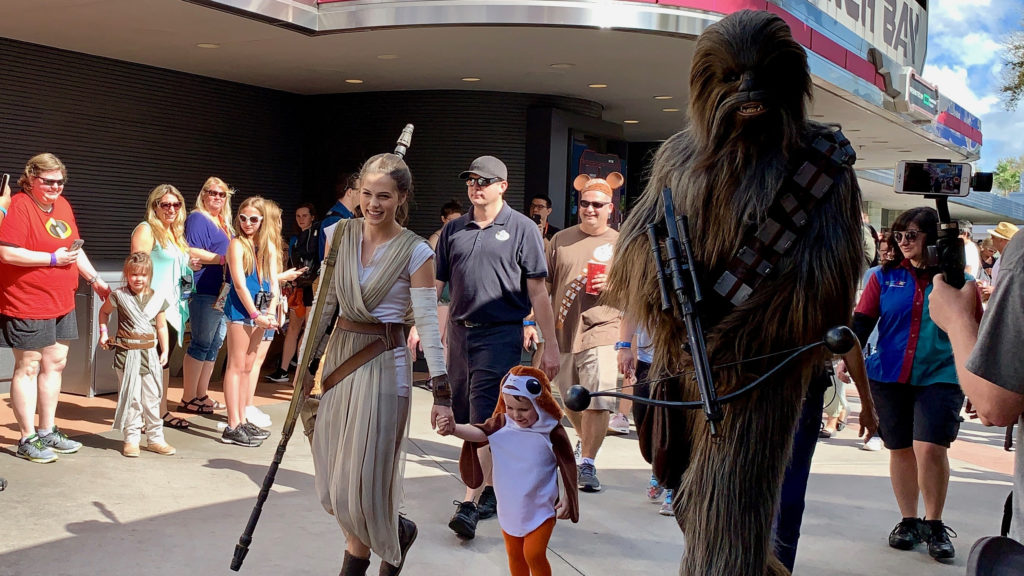 After a detailed tour of Star Wars Launch Bay, including watching the exclusive short documentary on the creative team behind the ever-evolving story, it was time to head the entrance of the park to actually march with Captain Phasma and the First Order troopers down Hollywood Blvd. and have a special VIP area just for us to watch the show. Now that the area was secured, it was time to head to the Backlot Express for lunch and surprises. Unfortunately, the Backlot Express has removed the Star Wars themed items recently but it is still a great place to feed your Wampa sized appetite. As we sat down for the lunch that is included with the tour and we received some special surprises, including a name tag based off of your selection of the Light or Dark Side when you first book the tour. 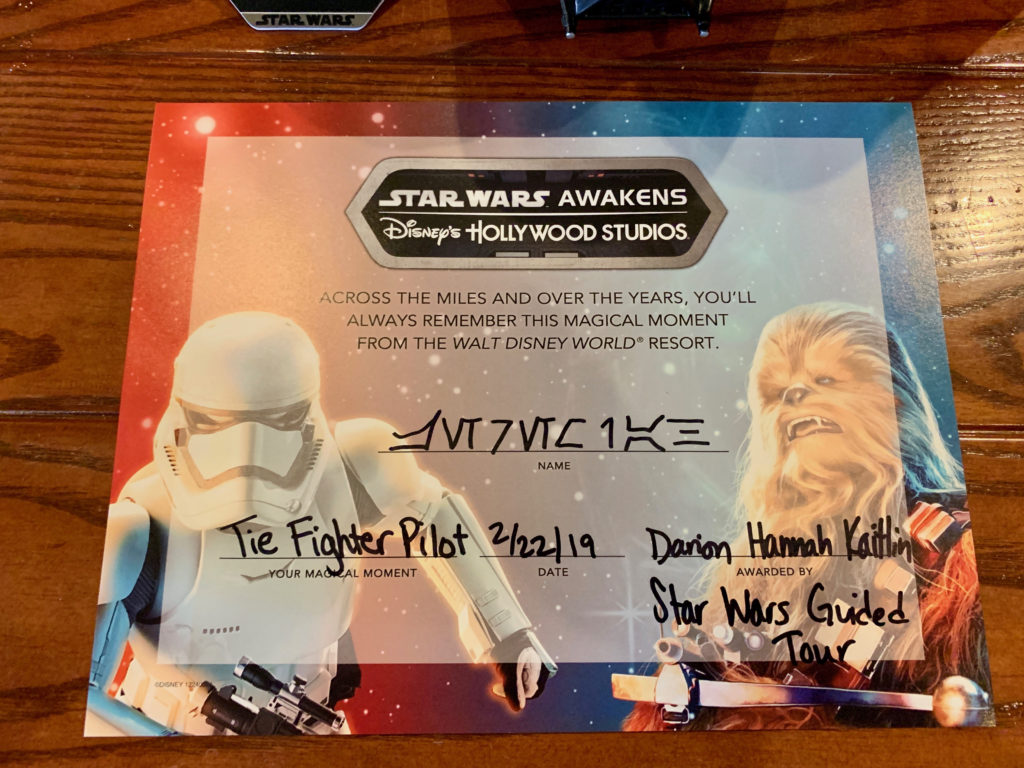 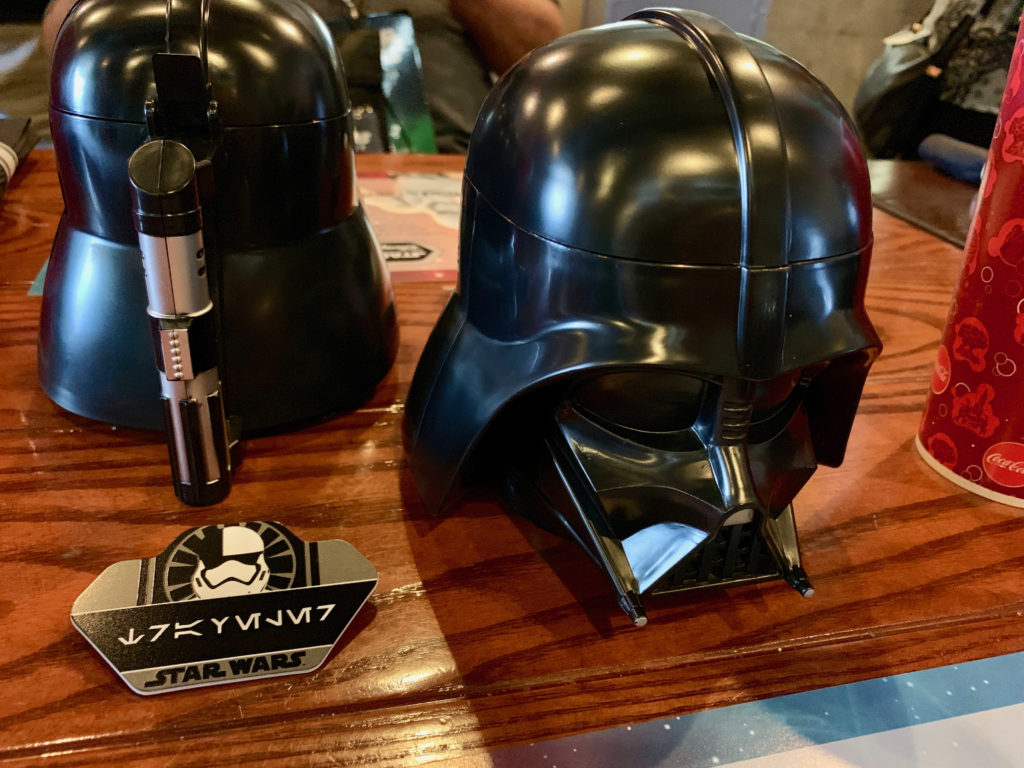 During lunch, we had a surprise visit from some of the First Order Troopers and our meal was topped off with a Lightsaber Churro — only available on this tour currently. With a belly as full as a tauntaun after Han gets done with it, it was time to head to the last part of the tour VIP viewing of Star Wars A Galaxy Far, Far Away. If you are any type of Star Wars fan, this show has everything from C-3PO and R2 to Rey and BB-8 and gives everyone a chance to see their favorite characters if only for a minute or two. With the tour wrapping up, in the shadow of shadow of the replica of the Grumman’s Chinese Theater where Star Wars opened on May 25th, 1977, we were set free to enjoy the park until later that evening where we had reserved viewing for Star Wars: A Galactic Spectacular. One of the other adjustments from the first time I did the tour was the option for Jedi Training: Trails of the Temple. The first time, it was part of the tour. Now if you have Younglings, they can take part in it and the parents or any other guests can go and enjoy it after.

The VIP viewing of the Star Wars: A Galactic Spectacular is right in the center of the park and provides a great view, close enough when the flame towers go you can really feel them. Overall this tour has gotten better since the first time I did it and I still would recommend it for anyone that wants to get a deep dive into the Star Wars Universe and how it exists currently in Disney’s Hollywood Studios. The cost is $99.00 per person (including tax) and lasts about 4 1/2 hours with lunch included. There is a special discount for Chase Disney Visa, Disney Vacation Club, WDW Annual Passholder for 15% off. For more information on this tour and how to book it, head to DisneyWorld.com/Tours.

Disclaimer: I was a guest of Walt Disney World for this tour. However, my opinions are my own.