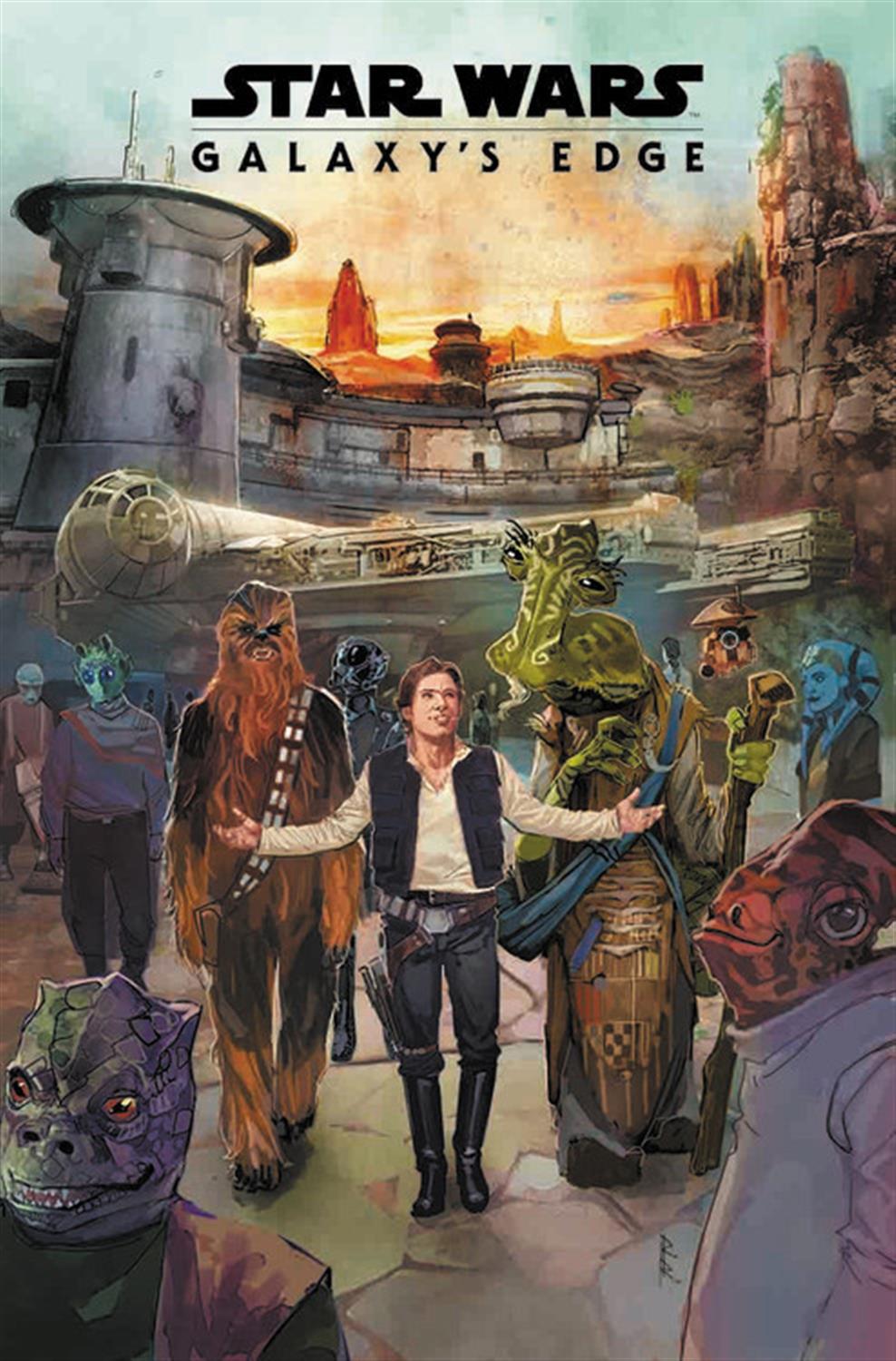 When Walt Disney Imagineers sat down to plan out the highly anticipated Star Wars: Galaxy’s Edge expansions coming to Disneyland Resort and Walt Disney World this summer, one of the first things they did was rule out setting the new land on one of the planets Star Wars fans had already seen in the movies.

“Tatooine is a reflection of Luke, something he wants to escape. Batuu is not about one single character’s journey. It’s about you,” said Lucasfilm’s Doug Chiang at this month’s Star Wars Celebration Chicago about why a new planet (Batuu) and all-new city (Black Spire Outpost) were created for Star Wars: Galaxy’s Edge.

In addition to prose, however, the Star Wars team at Marvel Comics is making its own contribution to fleshing out the world of Batuu with a five-issue run of a Star Wars: Galaxy’s Edge comic book, the first issue of which hit stores this week. Written by Ethan Sacks (Secret Empire: Brave New World) with art by Will Sliney (Secret Wars 2099), the Galaxy’s Edge comic seeks to fill in even more of the backstory of Black Spire Outpost and its many fascinating denizens. Specifically, Star Wars: Galaxy’s Edge from Marvel Comics focuses on Dok-Ondar, the Ithorian junk dealer who has spent his life collecting countless artifacts from the entire history of the Star Wars galaxy. Dok-Ondar runs the Den of Antiquities shop, a visitable location in Black Spire Outpost which promises to feature more Easter Eggs and hidden references than any other spot in Galaxy’s Edge.

Issue #1 of this theme park tie-in comic book deals with how Dok-Ondar came into possession of one of his most prized pieces: an infant Sarlacc monster. It’s pretty exciting to think we may actually get to see this thing moving behind a glass case when we step foot into the Den of Antiquities next month, but it’s also fairly interesting to read about how smuggler Han Solo of all people (along with his Wookiee pal Chewbacca, of course) was tasked with retrieving the beast for the collector during the era of the Galactic Civil War. The one drawback to this structure of flashback storytelling is that only the bookends of this tale actually take place on Batuu itself: the bulk of this first issue is set on the planet I’vorcia Prime, where Solo and Chewie set out to retrieve the young Sarlacc at a nature preserve.

Naturally, there are pitfalls and perils along the way, with Han facing off against some unseemly characters in his quest, but in the end it will be cool to know that the famous hero of the Rebellion stepped foot in Dok-Ondar’s shop when we do the same next month.

Marvel’s Star Wars: Galaxy’s Edge is goofy fun, and at times feels a bit too much like the theme park commercial it is, but anyone as obsessed with the upcoming lands as I have been these past few years is going to want to get their hands on this comic regardless. 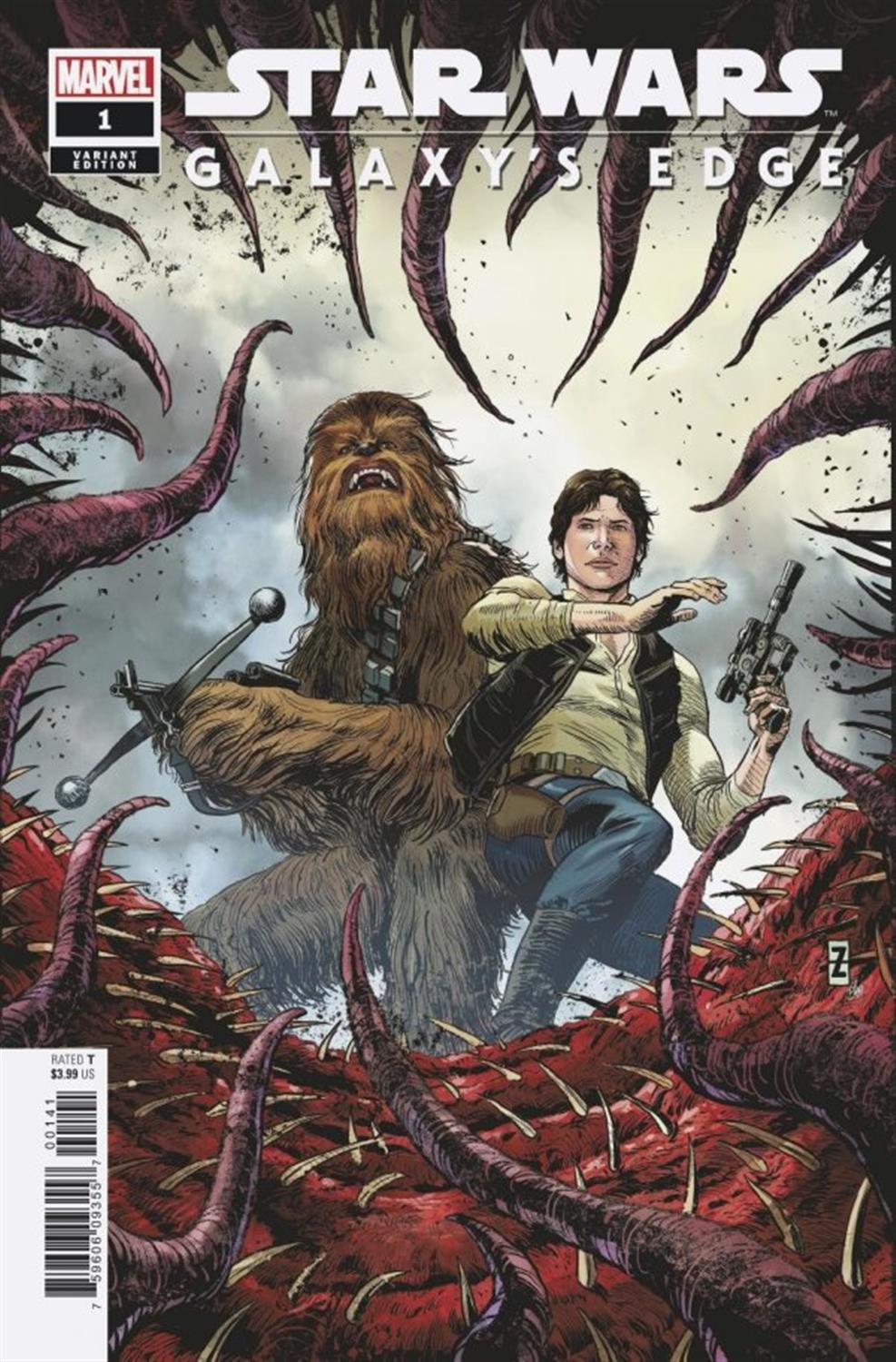