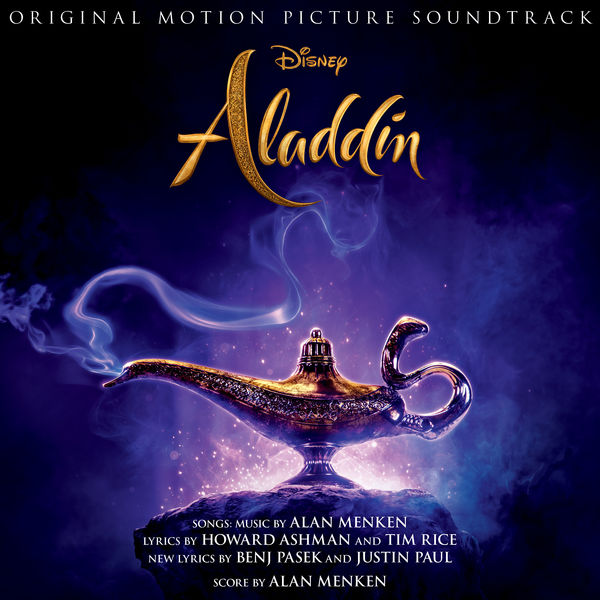 The soundtrack to Disney’s live action adaptation of Aladdin released ahead of the film’s theatrical release on May 24th. The film features five songs from the animated classic, on brand-new tune written for this version, plus several reprises. While the songs in this adaptation are best served with the visuals from the film, there are reasons to revisit them here, along with new score by Alan Menken.

All of the classic songs receive some updates in this release, with orchestrations that sound more rich and full than their animated counterpart. They also employ more Middle Eastern instruments than the 1992 approach attempted. It’s a shame that instrumental tracks weren’t included for all of the songs because the orchestrations are masterful.

The songs also sound more modern, particularly in the way that percussion is applied, creating some modern pop vibes. The best example is “One Jump Ahead,” which even changes the spacing between notes and ends up sounding very different from the original. “A Whole New World” also has some unique changes, becoming more acoustic than the original in its transition to live action.

The biggest chatter surrounding this remake has been the casting of Will Smith and he takes Robin Williams’ place on Genie’s classic songs, including “Arabian Nights,” “Friend Like Me,” and “Prince Ali.” Known best for his rapping, the most melodic aspects of these tracks sound overly autotuned, particularly “Arabian Nights.” They play more to his strengths on “Prince Ali,” while “Friend Like Me” is plagued by Fresh Prince-isms that often come off unintentionally comical. Lyrics have been tweaked to suit his style, but this number in particular pales in comparison to the untoppable Robin Williams. Another level of irony is that while the instrumental approach creates a more modern sound, Will Smith’s musical style feels trapped in the era of the original animated film.

The new song is called “Speechless,” a ballad for Jasmine performed by Naomi Scott. This Alan Menken collaboration with Benj Pasek and Justin Paul doesn’t quite fit in with the stylings of the other songs, but it is a powerful song that is guaranteed to resonate with modern audiences. It is dissected in the film into two parts and both tracks are on this release, as well as a more enjoyable full version that combines the two without a break.

End credit tracks include a new cover of “A Whole New World” from ZAYN and Zhavia Ward. They borrow a lot of the frills and arrangements from the 1992 pop version by Peabo Bryson and Regina Bell, but use a more diverse set of instruments. Will Smith also does a rap end credit version of “Friend Like Me” that is even more in the Fresh Prince style than the first, along with assistance from DJ Khaled.

There are twenty-five separate score tracks by Alan Menken, reusing all of the original score elements from the animated version and adding in instrumental versions of “Speechless” for some of Jasmine’s scenes. There are a few new melodies to be found, such as on the track called “The Basics.” Like the orchestrations for the songs, the score uses a wider array of Middle Eastern instruments and ultimately sounds quite different from the animated soundtrack. Similar to how elements of “Home” were included in the score for the live action Beauty and the Beast, keen eared fans will pick out parts of “Proud of Your Boy” in this release.

While the majority of the songs work best in the film, the Original Motion Picture Soundtrack release of Aladdin features richer orchestrations of some of Alan Menken’s best work. While aspects of it are guaranteed to make fans of the original cringe, it delights far more than it disappoints and gives fans more than a few reasons to want to revisit it. The adjusted lyrics don’t give much away about the film and eager viewers who can’t wait need not fear spoilers by giving it an early listen.