It’s an odd thing sitting inside of a Disney theme park hearing a screen legend like Tom Hanks share an anecdote about being at another Disney park. “At Disneyland, you know they have that [Fantasmic] and there’s fireworks and at Disneyland, the closing of the show is the Mark Twain steamboat comes by and all of the Disney characters are dancing on the steamboat. Belle, Sleeping Beauty, Mickey, Mulan, Captain Hook, Peter Pan, they’re all there. I was there with my family. My daughter who is in her thirties burst into tears. I said ‘What’s wrong?,’ and she said ‘Look, dad, look at the end of the boat,’ and it was Woody and Buzz. She said ‘Dad, you will always be on that boat dancing for the rest of time as long as Disneyland is here.’”

It’s hard to imagine a world without Disneyland, and it’s equally difficult to imagine a world without the enduring Toy Story characters. Woody and the rest of Bonnie’s toys hit the road for a new adventure on June 21st in Toy Story 4. Earlier this month, the cast and creative team joined together inside Toy Story Land at Disney’s Hollywood Studios at the Walt Disney World Resort for a round-up style press junket that reunited Tom Hanks with cast members Tim Allen, Annie Potts, Keanu Reeves, Christina Hendricks, and Tony Hale as well as Director Josh Cooley and Producers Jonas Rivera and Mark Nielsen.

“Woody has been the great gift that I’ve seen play out again and again in my own family as well as sort of around the world, even in cultures that it’s not my voice,” Tom Hanks shared. “What I have truly appreciated is that no matter how old you are now, when you see one of the movies you’re the same age as when you saw the first one. There’s not a bump, not a jolt, there’s no nostalgia, nothing ages poorly. It’s exactly as it was and sort of always will be and I think in some ways it’s like the definitive Disney enterprise in that there is a cohesiveness and an eternal quality to not just the stories and the characters but the emotional bonds that we have with each one of them. And I have always been dazzled when they have come back and said we’re going to try another one because the question is always, really? Really? Well, ain’t you guys bold. You think you can match that last one we did? Well, good luck.” ”I just loved how they filmed this,” Tim Allen enthusiastically explained. “The beginning is emotional and they trick you with this little emotion thing in the beginning so you get sucked into it and then [Duke] Kaboom is so funny and everybody new is so wonderful to watch.”

Director Josh Cooley opened up about how the creative team strived to make the new characters feel like they belong in a well-established world. “With these toys, the new toys in this film, we looked at the toys that we grew up with and the ones that we played with. When you look at the original Toy Story some of those are more classic toys like Slinky and Potato Head, so we went more to the ’70s and ’80s in terms of toys and then just tried to figure out characters that weren’t just there to be characters but also helped the story move along and supported Woody as much as possible.”

Producer Jonas Rivera explained how each new character is essential to the plot of the film. “The story would not work without Gabby Gabby. She is an echo of Woody and we needed her to be this legit and real and truthful human character and the same thing for Duke Kaboom and Giggle and everybody new. So they’re not just for fun, although we love them, but this movie wouldn’t work without them and that’s kind of our metric.”

Tony Hale joins the cast as Forky, whose very character serves as a catalyst for the plot of Toy Story 4. “It’s overwhelming, which helps because Forky is very overwhelmed. But I remember when they brought me up to Pixar and they sort of described him as he’s kind of nervous and I was like ‘Check,’ he asks a lot of questions, ‘Check,’ and he’s kind of gullible to a fault and I was like ‘Bingo, I’m in!’ So i just love that he sees everything as new and mainly I love that he’s a character that his home place is trash. That’s all he knows is to help people eat soup and then Woody comes along and shared that he has a greater purpose. And I think just in life anyone who may see themselves that way, they have worth, they have purpose and I think that’s just a beautiful message that [Toy Story 4] is giving us.”

Bo Peep returns in this film after having been absent from Toy Story 3. “I’m 66-years-old,” Annie Potts shared when explaining how her personal life influenced her performance in the film. “I’ve said goodbye to a lot of people and hello and, you know, held hands and looked out into a new future and that was sweet to play that out. I never saw the full script. I never knew exactly what I was doing. Over time I became aware of how important the role was going to be, but not until three weeks ago when I saw the thing, I told Josh afterward, I said thank you so much for putting this crown on my head. I think she’s so lovely and I hope that I… you know, my wish was to bring all of the experience of my long, colorful life to kickass Bo.”

“I’m too close to it,” Tim Allen explained when asked what he thought of the final film. “The end was kind of mercurial and then I read it and it was so bold and I wrestled with loss in my family and loss in my life and I’m an old philosophy major in college and losing and gaining… [Toy Story 4] was like a daughter getting married, perhaps. There’s great sadness because she’s leaving, but great [happiness] because she’s also gaining something. I told Tom the same thing when I finished it, he hadn’t read it and I had a real tough time but I have a lot of other baggage about losing things.”

It was widely reported that Tom Hanks had an emotional final recording session on the film and the actor elaborated at the press junket. “I had to come to a realization where it was like, oh, is that the last line? And they all said ‘Yeah, that’s it.’ We were back in the original… we were in stage B, Doc who was the mixer was through the glass and that’s where it all began and that’s where it was all ending. Earlier, the sessions before that Tim had texted me… and so knowing that we were going to be in this territory, I asked… usually you have the mic stand and they’re all at a table in front of you and I asked if I could flip it around and have my back to them because I didn't want to have any self-consciousness for what I knew was going to be the last… certainly the last few hours that I would spend working on the movie but also the last scenes. And when it came to pass it was… I felt as though I was on the other side of a river waving to everybody that I had left back in the old country. It was pretty profound, there’s so much muscle memory that goes into it. You drive into the lot through the same gate, you park in the same spot they had for you, you then go through the same doors and you get in your car and you drive back through and you think I’ve recorded the last moment of the current Toy Story.”

Woody and Buzz showcase one of the greatest friendships in cinematic history, but what many Toy Story fans don’t know is that the films have created a real-life friendship between the actors that speak for them. “We actually have become very close simply because of the union of Woody and Buzz,” Tom Hanks shared about his relationship with Tim Allen. “After we made the second one, we began to have regular lunches, you know, about every three months or so and which he and I sit down and alcohol is not involved, it’s just we sit down and we talk for about three-and-a-half-hours straight and we do get together and we seek each other out in order to touch on all of the aspects of our life, certainly professionally, but it would not have come out were it not for him being Buzz and me being Woody.”

You can reconnect with Buzz, Woody, and the rest of the gang on the big screen starting June 21st. 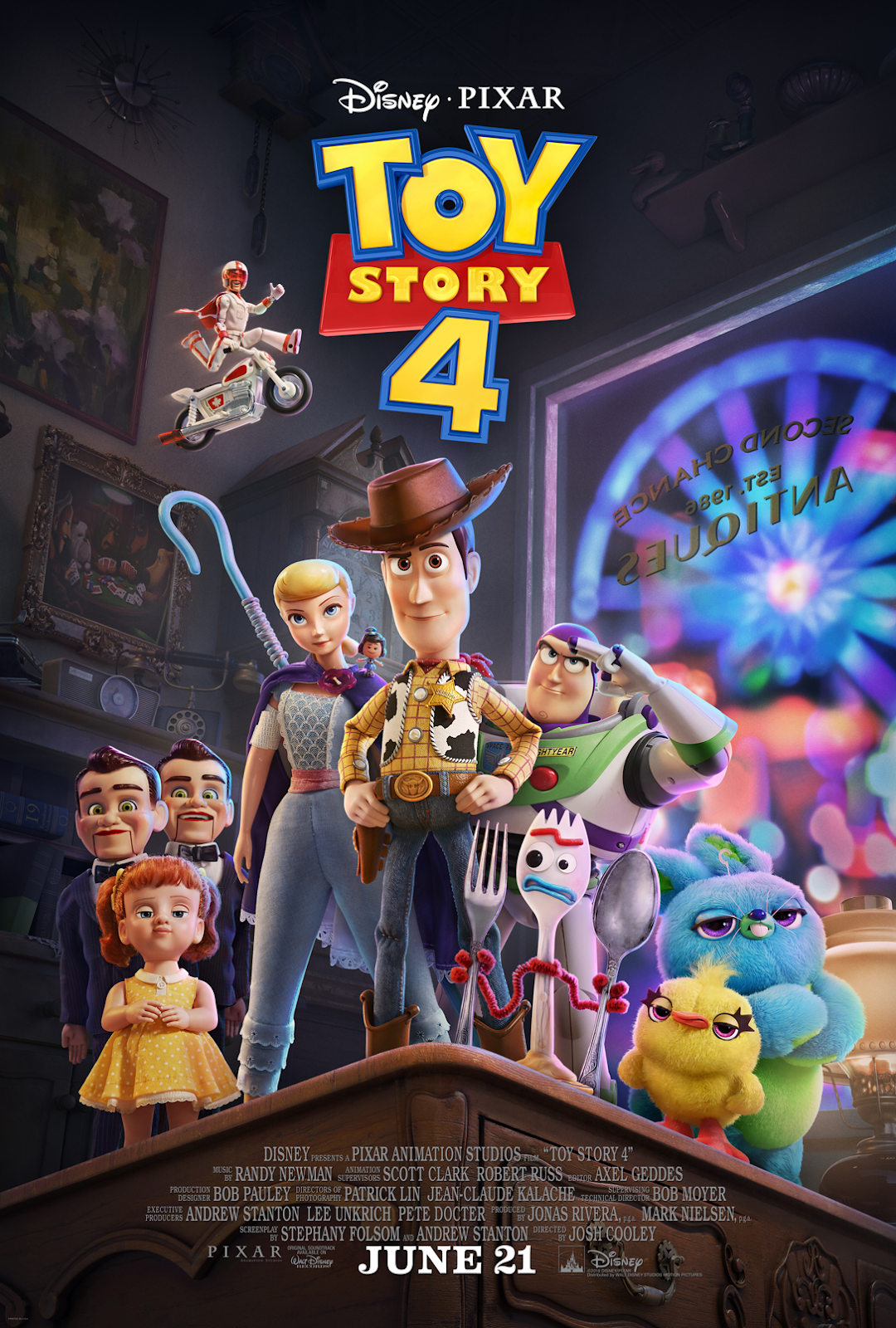