TCM’s Treasures from the Disney Vault returns September 2nd for an evening that celebrates some of the studio’s timeless characters and actors. You’ll see Mickey Mouse, Donald Duck, Goofy, and Jiminy Cricket through a few short subjects and an animated feature, the third such film in the entire series to date. You’ll also see some Disney Legends and icons including Dean Jones (twice!), Annette Funicello, and Tommy Kirk. Leonard Maltin is once again our host and curator, with insightful introductions and wrap-ups for the main features of the night. Our guide offers an early preview to help plan your evening and DVR schedule. 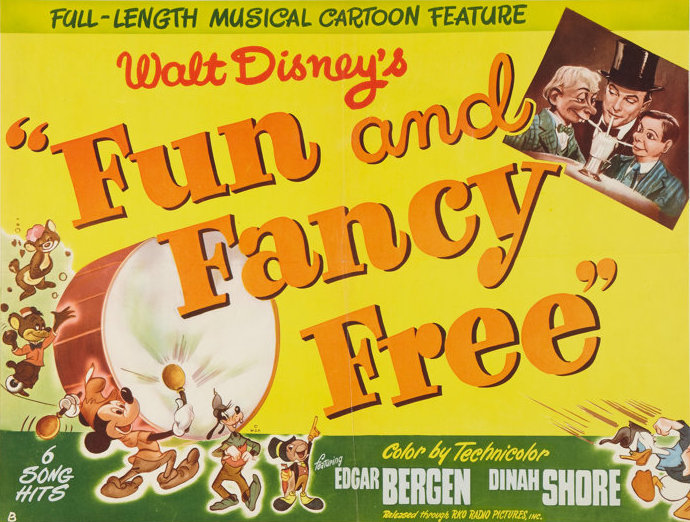 Mickey Mouse made his feature-film debut in Fantasia and while Sorcerer Mickey is one of his most iconic forms, second only to his standard red shorts/yellow shoes look, Fun and Fancy Free was the bigger part. Not only does the mouse-that-started-it-all get more screen time here, but he is also accompanied by his biggest scene stealers, Donald Duck and Goofy. One of the last World War II-era package features, Fun and Fancy Free is a little-known film, most famous in parts then it is as a whole.

Jiminy Cricket is the connecting tissue between two incongruous stories that together make a feature-length special. First up is “Bongo,” the story of a circus bear who gets lost and finds love in the wilderness, narrated by Dinah Shore. When Jiminy’s neighbor Edgar Bergen hosts a party, he joins to find Charlie McCarthy, Mortimer Snerd, Bobby Driscoll, and Louanna Patten enjoying the story of “Mickey and the Beanstalk,” a retelling of “Jack and the Beanstalk” told through Mickey Mouse.

Like other package features before it, “Bongo” and “Mickey and the Beanstalk” were rereleased separately throughout the years, with one becoming a classic and the other fading into obscurity along with Fun and Fancy Free itself. It’s full of 1940’s charm and a catchy title tune for Jiminy Cricket to sing between segments. While I prefer “Mickey and the Beanstalk” with the animated Ludwig Von Drake sections replacing Edgar Bergen that came with a later release, it’s nice to see it as Walt Disney originally intended.

Recommendation: The biggest animated portion of the night is a must-see, with Mickey, Donald, Goofy, and Jiminy Cricket all starring in a film together. Don’t miss it! The first of three animated shorts of the night finds Donald Duck trying to change a tire. For context, this was made during World War II and one of the jokes (“Gosh darn rubber shortage”) is not as funny outside of the era. The way tires were changed has also been modified, with Donald inflating a rubber tube to place inside his tire. All the same, the duck’s frustration and difficulty with what should be an easy task makes for a fun interlude and a perfect lead-in to the next film.

Recommendation: It’s not one of Donald Duck’s best shorts, but if you’re staying for “The Love Bug,” enjoy “Donald’s Tire Trouble.” 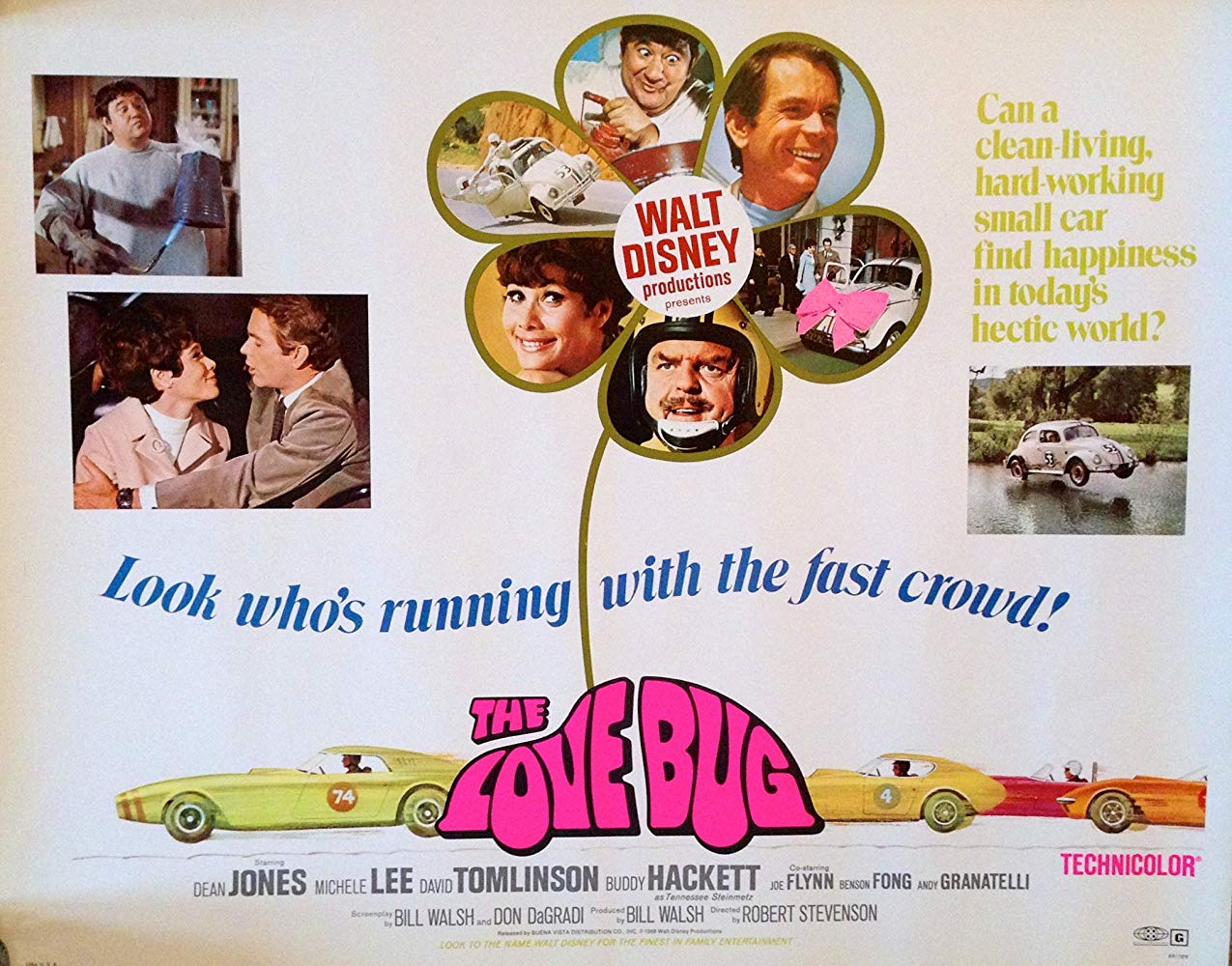 With a lasting impact on pop culture 50 years later, The Love Bug was an instant-success and led to Disney’s biggest film franchise of the pre-Iger era, with four direct sequels, a television series, a made-for-TV “remakequel,” and a failed attempt at a reboot starring Lindsay Lohan in 2005. Whether it’s your first time or your 100th, The Love Bug is full of 1960’s charm and humor.

Dean Jones stars as Jim Douglas, a race car driver down on his luck. When his car dies, he buys a new one from a racer/dealer named Thorndyke (David Tomlinson, Mary Poppins) and the only one he can afford is a lackluster looking VW Beetle that turns out to have a mind of its own. Nicknamed Herbie by his mechanic Tennessee (Buddy Hackett, The Little Mermaid), the little car not only changes Jim’s luck on the race track, but also his luck in love with the pretty car salesgirl.

One overlooked reason for the film’s charm is the score by George Bruns, which features some creative instruments that make it sound like a car could hum it. This wasn’t Dean Jones’ first Disney film, but it did guarantee him a long career as the star of Disney comedies and also gave him several opportunities to reprise the role of Jim Douglas. Herbie has left an impact on Disney Parks and Resorts in a variety of ways, including Disneyland’s “Herbie Day” special events, as a guest star in the “Lights, Motors, Action! Extreme Stunt Show,” and as a wing of themed rooms at Disney’s All Star Resorts at Walt Disney World.

Recommendation: One of Disney’s biggest films of the 1960’s, you’ve gotta check out “The Love Bug.” Following the enormous success of Mary Poppins, Walt Disney put into production another big-scale musical production, this time drawing influence from the autobiography of Cordelia Drexel Biddle, My Philadelphia Father. The Sherman Brothers wrote an all-new score for the production and Fred MacMurray was cast alongside some screen legends like Greer Garson and Geraldine Page, with the introduction of newcomers Leslie Ann Warren and John Davidson.

The Biddle family is eccentric and peculiar, with boxing bible classes and pet alligators as just a few of their many quirks. When eldest daughter Cordelia (Leslie Ann Warren, The One and Only… Family Band) decides to ditch her boxing gloves for softer hobbies by joining an all-girls college, her father Anthony (Fred MacMurray, The Absent-Minded Professor) is disappointed. But when she returns from school with a fiancé (John Davidson, The One and Only… Family Band), things get downright messy when New York City and Philadelphia aristocrats collide.

The Happiest Millionaire is known for being the last live-action film in principal photography when Walt Disney passed away, it being his last on-set photo. It is not, however, widely regarded as a great film with a nearly three-hour runtime and all manner of plot replaced with interesting characters that can’t sustain a film of this length on their own. However, the Sherman Brothers songs are plenty and many of them are highlights, including “Fortuosity,” “I’ll Always Be Irish,” “Are We Dancing?,” “Detroit,” “Let’s Have a Drink on It,” and “It Won’t Be Long ‘til Christmas.”

Recommendation: While you won’t fall in love with the film itself, Sherman Brothers fans are encouraged to check it out and if you love Disney musicals, you won’t regret seeing it at least. 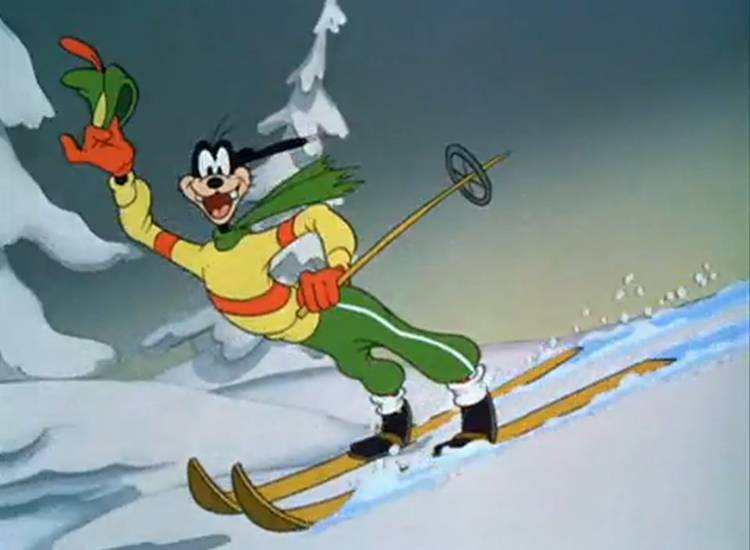 One of Goofy’s most iconic shorts is a perfect winter-time lead-in to the next film. A narrator provides everything we need to know about skiing while Goofy demonstrates to the best of his abilities. From getting his skis stuck in his trousers to going down the mountainside backwards, there’s no shortage of hilarious gags to be found in this classic. This short was the start of the long-running Goofy “How to” series and introduced his iconic holler to audiences around the world.

Recommendation: Don’t miss the best short of the night! 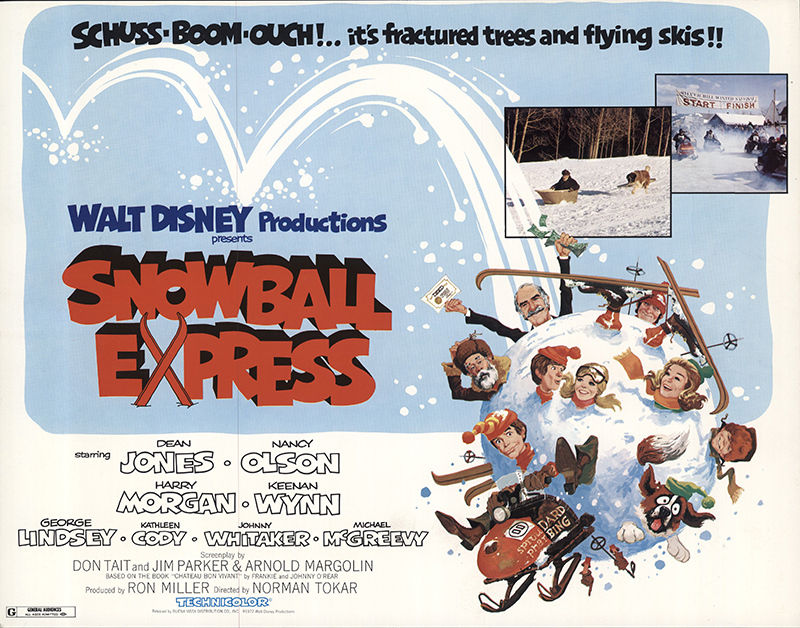 Dean Jones returns for his second comedy of the evening alongside some familiar Disney faces. Unless you’re a fan of obscure Disney films, you’ve likely never heard of Snowball Express, which filmed on location in Colorado. For Disney Parks fans, the film offers a slapstick view of life around the time Walt Disney World opened.

When unhappy accountant Johnny Baxter (Dean Jones) inherits a ski resort in Colorado, he moves his wife (Nancy Olson, Pollyanna) and their kids from New York City to a small wintery town. Upon arrival, they discover that the place is dilapidated, in a bad location, and even comes with an unexpected live-in. Determined to make it work, Johnny takes out a loan from the local bank owner (Keenan Wynn, The Absent-Minded Professor) who desperately wants the land. In order to keep up with his loan payments, Johnny enters the local Snowball Express competition in the hopes that beginners luck will make him a winner.

There’s nothing too original about Snowball Express, which plays it safe and relies on the tried and true Disney laugh riot sequences strung together by bits of warmth and heart. And while the resolution is ultimately too convenient to be exciting, the delivery by Mary Wickes (Sister Act) is a delight to see.

Recommendation: You don’t need to see “Snowball Express,” but it’s quirky enough to be fun if you stick around. Donald Duck returns for one of his earlier shorts which finds him having winter fun on the ice. He impersonates legendary figure skater Sonja Henie before causing trouble for his nephews who are in the middle of a hockey game. It’s one against three in this crazy game.

Recommendation: “The Hockey Champ” is a fun example of Donald Duck stirring up trouble for Huey, Dewy, and Louie. 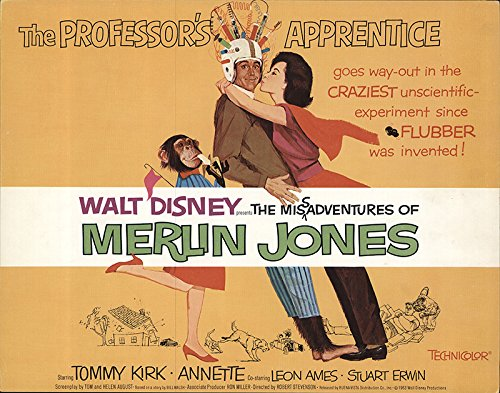 Annette and Tommy Kirk were two of Disney’s biggest stars since the mid-1950’s and both maintained their star status into their teen years. Both were also starting to explore work outside of Disney, particularly the teen beach and sci-fi craze that was packing them in at the drive-in. The Misadventures of Merlin Jones was intended to be their final Disney picture, but proved shockingly successful and inspired a rare Walt-era sequel, The Monkey’s Uncle.

Merlin Jones is a college science whiz whose always cooking up new adventures. First he unintentionally creates a device that allows him to read minds, then he gets in trouble while experimenting with hypnosis. Together with his girlfriend Jennifer, Merlin always manages to get out of serious trouble when his experiments go awry.

Originally filmed as a two-part story for The Wonderful World of Color, Walt Disney ultimately packaged the two together into this theatrical film that turned out to be a big success. The Sherman Brothers wrote the title song for Annette to sing and the opening credits feature stop motion animation that would make The Parent Trap jealous. The film feels like a perfect segue between Walt Disney college comedies like The Absent-Minded Professor and the post-Walt Dexter Riley series.

Recommendation: Despite its initial success, “The Misadventures of Merlin Jones” is rather lackluster. Stay for the opening credits but beyond that there’s a good reason why the film has faded into obscurity.

And so completes another exciting evening of TCM’s Treasures from the Disney Vault. It was nice to get another animated feature and a beloved classic along with some lesser known features that you may not have even knew existed before tonight. When the event has its next outing in December, Disney+ will have been born into the world and many of these films are expected to be available to subscribers at a moment's notice.