The Simpsons have joined the Disney family, and will soon be found on the forthcoming Disney streaming service, Disney+. All thirty years of The Simpsons will be accessible at the touch of a finger, and this has left me reflecting on what are some of the must-see episodes that I would recommend. After consulting with my wife, who is as big a Simpsons fan as I am, I now present ten episodes of The Simpsons that everyone must check out.

Marge vs. the Monorail Fans of Disney Parks have probably dreamed of a monorail coming to their town, but what happens if it did? In the twelfth episode of season four, Springfield is suckered by a con artist named Lyle Lanley to build a monorail in Springfield. The town has three million dollars to spend after recently fining Mr. Burns for dumping toxic waste in the city park. Lanley talks about his past accomplishments and that convinces Springfield to hire him. Marge has doubts about the monorail and she investigates the truth behind Lanley’s claims. Seeing Homer Simpson as a monorail conductor will provide countless moments of hilarity and the dumb luck he has at saving the day is the typical ending to a Simpsons episode. Top Pop Culture moments in this episode are Phil Hartman voicing Lyle Lanley in a stellar opening number about why a monorail is a great thing to build. The guest appearance by Leonard Nimoy was neat too.

The most violent cat and mouse in animated history get their own theme park in episode four of season six. Bart and Lisa pester Marge and Homer to go to Itchy & Scratchy Land, which leads to chaos and mayhem. Made up of a blend of Jurassic Park, Westworld, and the aesthetics of the Disney Parks, the artificial intelligence of the park takes over and tries to kill the visitors. It’s up to the Simpson family to save the day. Top Pop Culture moment is at the end of the episode when people are wondering how Euro Itchy & Scratchy Land is doing. Cut to the European version of the park, and there is no one there. A very direct insult to Euro Disney at the time and how poor the attendance was at the very real park. Bonus points for creativity and depravity with the Itchy & Scratchy take on Fantasia’s ‘The Sorcerer’s Apprentice’ with the Itchy & Scratchy version called ‘Scratchtasia’. It’s bloody good.

While this is two episodes, you must count episode twenty-five of season six and episode one of season seven as one long story. Mr. Burns in his desire for total domination of the energy sector in Springfield has blocked out the sun, causing the town to have a grudge against the cruel eccentric billionaire. Mr. Burns has no love for anyone, including his chauffer and confidant Waylon Smithers, and ultimately ends up shot by an unknown assailant. While part one of these episodes left the audience debating the clues and the motive of the assailant all summer, when season six began, audiences learned that there was no grand plot to kill Mr. Burns. Top Pop Culture moment was the skewering of the classic Dallas episode ‘Who Shot J.R?’ While fans debated all summer about who the culprit could have been, most assumed that Homer was the assassin as all the evidence pointed to him. The conclusion shows how the evidence can be misinterpreted. 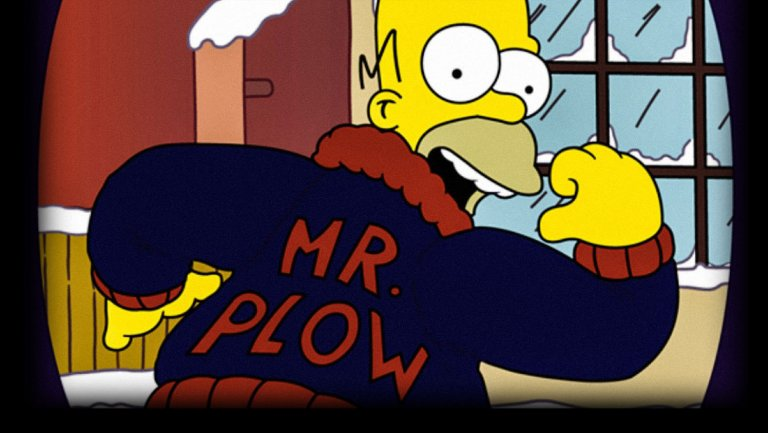 Homer wrecks both family vehicles in season four episode nine and while looking for a new vehicle at the car show he’s persuaded to think outside the box. Rather then buying a useful family vehicle, he is talked into purchasing a snow plow, and starts his own plowing business. This turns out to be lucrative and ‘Mr. Plow’ is soon keeping the streets of Springfield safe for drivers; until Barney starts his own business ‘Plow King’ and steals Homer’s customers. The jingle alone for ‘Mr. Plow’ is memorable enough, but this episode satirizes the competitive nature of small business and how if anyone has the drive and determination, and no competition, they can succeed. Homer and Barney end their rivalry when Homer saves the ‘Plow King’ from an avalanche, but God intervenes and melts all the snow, thus ending the need for snow plows. Top Pop Culture moments in this episode is the guest starring role of Linda Ronstadt as herself playing Barney’s girlfriend, and Adam West appears alongside the original Batmobile at the car show.

Season four was packed with classic stories that are remembered decades later. Episode twenty of that year had the citizens of Springfield take part in the yearly activity ‘Whacking Day’ where they would all pick up a club and kill as many snakes as possible. Lisa Simpson is the only one to question the intelligence of this town tradition. Bart who was expelled from school at the start of the episode helps Lisa protect all the snakes during the fateful day, and together they convince the town that ‘Whacking Day’ was originally an excuse to beat up the Irish and that snakes are a good thing. Thanks to Bart being homeschooled by Marge, he learned the truth about ‘Whacking Day’ and used his intelligence for good. Moments of hilarity are Homer training in the backyard for ‘Whacking Day’ (you must see it to believe it). Top Pop Culture moments include the guest-starring role of Barry White, and when Bart reads a book by noted journalist Bob Woodward titled ‘The Truth About Whacking Day’.

Homer Simpson and family have always attended Sunday church, but in episode three of season four, Homer rebels against the need to go to church and stays home. The rip in his ‘stupid itchy church pants,’ pushes him over the edge. While Marge leads the kids into the middle of a blizzard to make it to church on time, Homer has the best day ever sitting at home. This leads to Homer’s abandonment of church which forces Marge and friends to try and convince Homer to come back to Sunday service. After accidentally setting fire to his house one morning while skipping church, he is saved from the inferno by his god-fearing do-gooder neighbor Ned Flanders, who has just returned from church. After his close call, Homer agrees to come back to church and give religion another chance. Top Pop Culture moment of this classic episode is when god is brought in as a supporting character and agrees with everything Homer says. God is the only character in The Simpsons to have five digits on his hand, unlike the standard four.

It’s contract negotiation time at the Springfield Nuclear Power plant, and in episode seventeen of season four, Homer who has already learned that Lisa needs braces, convinces the union to reject Mr. Burns’ contract offer because they would need to give up their dental plan for a free keg of beer. Homer is elected president of the union, and the plant workers go on strike. Burns infuriated with being outsmarted by Homer, whom Burns thinks is a genius, shuts the power off, in hopes it would force the workers to break the strike. It does no such thing, and ultimately Burns caves to the demands of the union and Homer. Burns agrees to give back the dental plan if Homer resigns from the presidency of the union. Lisa gets her braces which are invisible, and everyone ends happy. Top Pop Culture moments of this episode are when Lisa is under sedation for her braces and she experiences a trippy dream-like The Beatles ‘Yellow Submarine’ cartoon, and the multiple satirical looks at how unions are showcased on the silver and small screens.

Homer vs. the Eighteenth Amendment 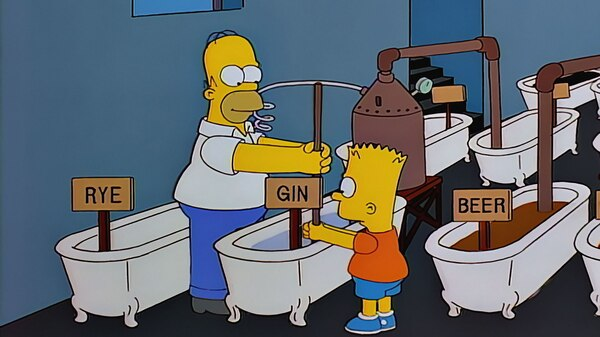 Bart accidentally gets intoxicated during the Springfield St. Patrick’s Day parade which leads the town to learn that alcohol has been illegal in Springfield for many years. Episode eighteen of season eight is filled with throwbacks to The Untouchables television series from Moe’s Bar becoming a speakeasy to Chief Wiggum being replaced by U.S. Treasury officer Rex Banner in the Elliot Ness role. The man who supplies Springfield with all the illegal booze is none other than Homer J. Simpson. Prohibition soon ends, and life gets back to normal. The best line of the entire episode comes from Marge who is unaware of Homer’s alcohol making skills. There are explosions coming from the basement and Marge questions Homer about the strange sounds. In his typical fashion, Homer tries to pass it off as flatulence from a bean he ate earlier. Top Pop Culture moment is when Rex Banner, Lou and Eddie are discussing the Beer Baron in a scene reminiscent of Edward Hopper’s classic painting ‘Nighthawks’.

Fans of the Marvel Cinematic Universe will enjoy episode two of season seven, as the production of the superhero movie, ‘Radioactive Man’ comes to Springfield. Bart and Millhouse are long-time fans of the comic series and Millhouse wins the role of sidekick ‘Fallout Boy’ to megastar Rainier Wolfcastle as ‘Radioactive Man’. Why this episode is particularly funny, is because we get a different view of what it’s like for a film crew to go on location, and all the hassles the crew deals with from Mayor Quimby and the town. Eventually the non-stop taxes levied by the city force the production to head back to Hollywood, where they are welcomed by friendly people willing to lend a hand. Top Pop Culture moment takes place when Hollywood Legend Mickey Rooney fills in for Millhouse after he has left the film because Millhouse can’t take the grind of a movie production schedule.

Poor Lisa takes pity on Ralph Wiggum on Valentine’s Day and gives Ralph his only valentine. Lisa did it to be nice, and because she is kind to everyone. Ralph fell in love immediately. For the rest of episode fifteen of season four, Ralph declares his love for Lisa, even on national television. Lisa can’t take all the attention, and tears into Ralph, which embarrasses him, and leaves Lisa feeling bad. It’s during the school play, which Ralph happened to score the lead role opposite Lisa, that we finally see Ralph Wiggum as more than just a lovable bumpkin. By the end of the episode. ‘I Love Lisa’ dramatizes young love in a perfect way, and makes viewers appreciate how we should always try and be kind to others. Top Pop Culture moment of this episode is during the President’s Day Pageant as Millhouse is playing Abraham Lincoln, Bart enters as John Wilkes Booth and plays it like the Terminator. Bart even has his trademark line, “Hasta La Vista Abey!”

Author Note: Season four is one of the best seasons of The Simpsons. There are many more episodes in that season that could easily join this list. I chose episodes that were funny, well written, had great story arcs, and are easily rewatchable.

Thirty seasons of The Simpsons will be available to stream on Disney+ starting November 12th.