We were given the opportunity to interview Jake Monaco the composer of the upcoming Pixar shorts Forky Asks a Question and Lamp Life. He shared with us his journey as well as his passion for being part of the Disney-Pixar family 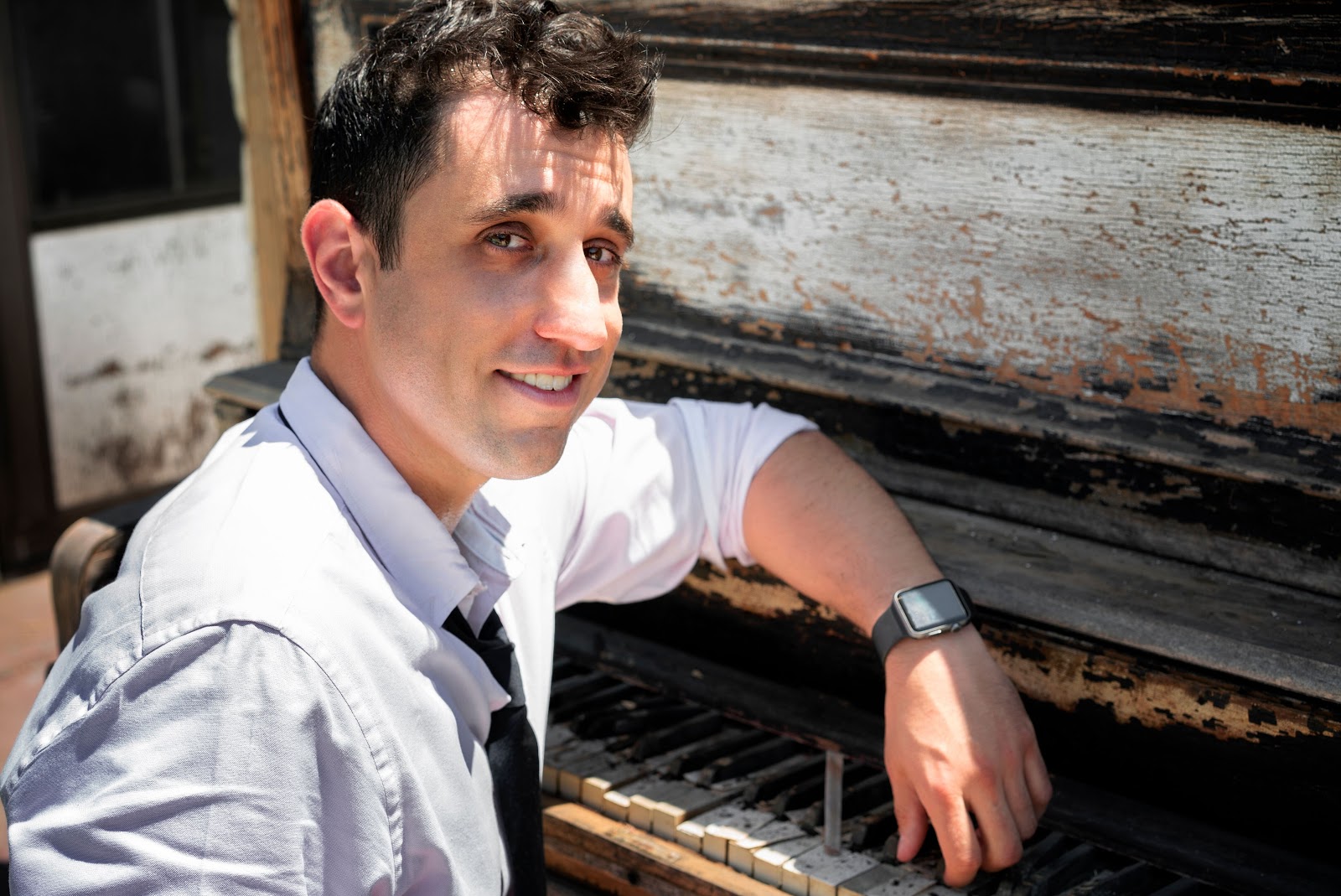 Laughing Place: Hi Jake. Thanks for taking the time so we can get to know you. Can you tell us a little bit about yourself and what led you to scoring Forky Asks a Question

Jake Monaco: Well I started playing guitar at a young age and then I really picked it back up in high school. And then I started doing a lot of singer-songwriter stuff and then eventually that led to playing in some bands in high school and then a little bit more seriously in college. I started taking some music classes in college. I wasn't quite sure exactly what I wanted to do. I knew I just kind of wanted to write songs and be a rockstar. And you know, it's a rough road to travel. And so over the course of four years in college and then for about a year and a half after we graduated, the band stayed together and we did  little college tours and got to open for some decent name bands at the time.

And then eventually they wanted to kind of go their own way and they wanted to start families and get steady jobs and whatnot. So I kind of wanted to decide what was I going to do in the music field at this point? I have a little bit more freedom, what should my next step be? And I looked into the film scoring program at USC and I flew out, I visited, I immediately saw a lot I liked. I had never really made the connection between show music and storytelling and that it could actually be a career. They never really entered my mind until I visited the program and all of a sudden everything just kind of clicked and made sense. I found it very difficult to just kind of come up with a concept to write a song or write a typical classical piece.

But writing for film and TV, there's a story there already and my job is to be able to support that story. It's amazing the emotions that can be invoked just from what you see. And then the music just strengthens and supports those emotions. I found this entire idea and concept, just mind-blowing. And so I immediately fell in love with this. I applied to the program, I got in, which was amazing, and it was an incredible year. Then I had the opportunity to start working for another composer. That led to a seven to eight year assistantships/ mentorships leading to lots of additional writing. That is where I started to meet some members of Disney family when the composer that I was working with was hired to do "Paperman" which then led to him doing "Frozen."

And so during this process, my relationships with Disney were also strengthening just because I was very involved with all of this. So within the next couple of years I kept in touch with everybody. And then Tom MacDougall, who is the head of music for Disney Animation and Pixar gave me a call and said, "I don't know if you're really going to be interested in this, but I've got this short." And I immediately just stopped him and I said, "Yes, absolutely." So, and he told me about this short named “Piper” and how they hired a composer, his name was Adrian Belew, and there was some great stuff in here and we just kind of want someone to refine a couple things and help take it across the finish line.

And I said, "Absolutely. I'm looking forward to meeting Eddie and everyone involved and helping however I can." So I got to meet Adrian, who was the head guy for a band called the King Crimson. He's a rock star in and of himself. So that kind of brought things back to what I originally even came out here for, so it was a very exciting opportunity.

But that led to my meeting a ton of other people in the Pixar world and eventually led to by doing some promo materials, starting with “Finding Dory.” And every year since then, there's been the Pixar summer release just had promo partners that I've been able to work with. This past year was “Toy Story 4” and that lead  to a SparkShort that I'm working on now. And that also led to “Forky Asks a Question” and a new short that's coming out called "Lamp life."

So the whole journey has just been incredible and every single person that I meet it feels like a big web and it's so exciting to be able to be involved with all these different people.

Laughing Place: How did you approach scoring Forky Asks a Question

Jake Monaco: Forky's character is so animated, and I don't mean that in the drawing sense. There are so many movements and facial expressions and the voice acting that Tony Hale does is just incredible. He is enough to carry any scene by himself. And so what Bob Peterson, who was the director of all these, really wanted the music to simply disappear into the background. That, in and of itself, was actually a challenge because with animation, I'm so used to commenting on what's happening visually with the music in some way, shape or form. Even if it means just targeting a point where I can take a break, pause for a joke and then restart.

Bob had to just continually reel me in and say, no, just don't stop, don't score it through, just play through. And then all of a sudden it just clicked and I understood where he was coming from and I understood what he wanted to do was really working. And given that Forky can carry any scene by himself, pretty much,  it made more sense. So the challenge was wrapping my head around a different scoring style and paying less attention to what's happening on the screen.

So there was always a little bit of a jazz vibe to each episode and Bob really dug that kind of approach. So it was nice to kind of embrace that and each episode is a little different, but it's got a very similar ensemble to it and it just kind of gives a happy, peppy little groove that sits in the background. And then there are a few episodes that very much diverts from that, especially in the latter five.

Laughing Place: What does it mean to you for being one of the first composers to play a role in launching Disney+

Jake Monaco: I hadn't really thought of it that way and yeah, that's incredible. I mean the fact that Forky will be one of the pioneering shows on Disney+ is super exciting. I love this character in general and this had nothing to do with anything else or any platform that it's being released on. But to be able to be a part of this lineage and then, not only a part of the show itself, but then with the Disney+ launch.  I've always loved Disney, I've always wanted to be able to be involved with them in some way, shape, or form. And my family is a Disney family and being able to do this and incorporate it and it's an amazing experience.  I love that I'm part of it. I'm very blessed to be a part of it.

Laughing Place: Do you have a Disney Pixar composer? Someone in that family that really inspires you?

Jake Monaco: Thomas Newman was one of the first composers that I started paying a little more attention to. And this is after I finally learned a little bit more about how film scoring works and how it ties into the storytelling. I knew who John Williams was, I knew who Danny Elfman was, but that was kind of my extent of being a film music buff because I really wasn't one when I was younger. Then I started paying a little more attention and then I started listening specifically to Thomas Newman stuff.

And then I saw and listened to like "Finding Nemo." And when I heard "Wall-E" for the first time, I just about lost it. I mean that score is absolutely beautiful. The piece “Define Dancing” where Wall-E and Eve are flying around in space is amazing. My husband and I used that in our wedding. It is so impactful to me and just so beautiful. I think his material is so inventive and so unique and give such a very specific sonic identity to every single thing that he does. And that is a quality that I admire greatly and I'd like to try and bring into every project that I become part of.

Laughing Place: Speaking of Forky, do you have another favorite Pixar character?

Jake Monaco: Yes, exactly. Which is one of the other reasons that when this whole thing came up, I heard that Bob was the director. I was like, you've got to be kidding me. I didn't know him personally, but I was at least familiar with his sense of humor, So the fact that he was involved with this was just like a bonus. So I love Dug. I think he's amazing. Aside from him. I think Wall-E,  that character and the heart that he has from his treads all the way up is just amazing and it's something that I always embrace.

Laughing Place: Are there any other upcoming projects that folks that get interested would like, you know, that should know about?

Jake Monaco: Disney is collaborating with Saks Fifth Avenue for a gigantic holiday light display that is going to be happening in New York City, running from Thanksgiving through the new year that I have been fortunate enough to be a part of and to create a medley of pieces that are holiday and "Frozen" inspired and they are doing a gigantic light show. So if you're in the New York area, I highly recommend stopping by Saks Fifth Avenue between five and 10:00 p.m.