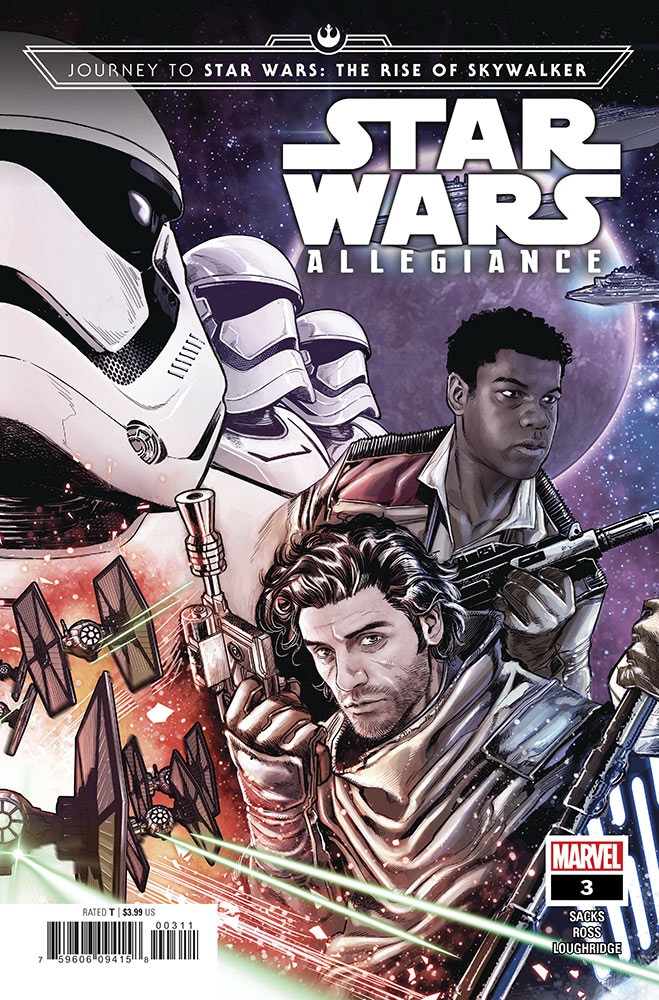 Picking up where we left off last week, the third (and penultimate) issue of Marvel Comics’ Star Wars: Allegiance begins with Rey, Rose Tico, Chewbacca, and even poor C-3PO in captivity on Mon Cala after participating in a brawl with local Quarren protestors. General Leia negotiates with King Ech-Car of the Mon Calamari, but tensions are high, and the meeting ends with Rey– probably misguidedly– agreeing to a duel with Quarren General Nossor Ri’s personal security droid, a huge and powerful rebuilt relic from the Clone Wars Battle of Mon Cala.

Meanwhile on the moon of Avedot, Finn and Poe have been cornered by the Kendoh gang, who are looking to collect a bounty from the First Order. Finn enacts his escape plan– sending Poe to load their ship with the impounded weaponry while the ex-stormtrooper runs a defensive distraction– which puts him in direct danger when he comes face-to-many-faces with the shapeshifting Clawdite Remex. 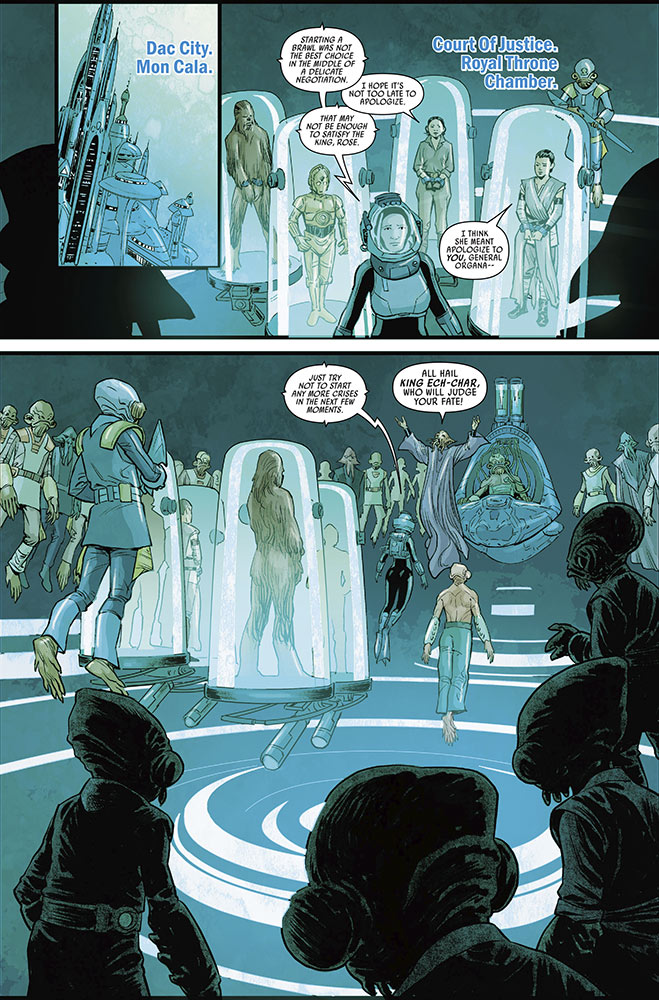 Rey goes up against the massive RK-9 droid in a combat arena, and though she seems to regain access to her Jedi powers long enough to Force-push a Mon Calamari guard out of the way of a stray blast, her talents are not quite enough to overcome the enormous, malfunctioning machine. Thinking and acting quickly, Chewie and Rose interfere in the fight, defeating the droid but earning the group a decree of exile from Mon Cala, a royal order even Aftab is helpless to reverse. 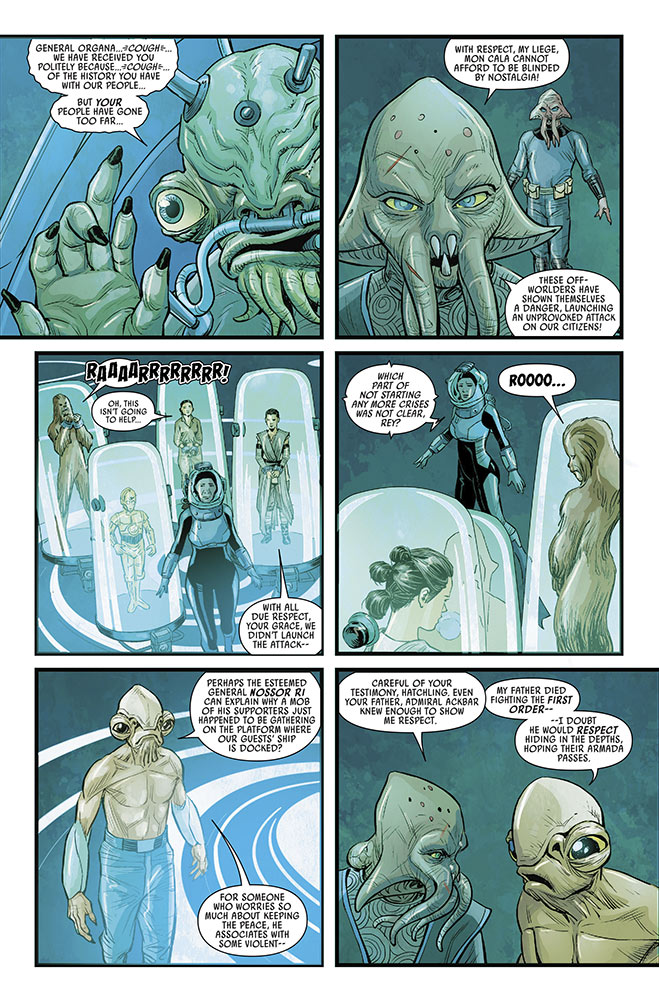 Back at the Resistance camp on Anoat, Lieutenant Connix learns that an armada of First Order star destroyers are heading to Mon Cala to intercept our heroes– and we readers know they were informed of the Resistance’s presence on the alien homeworld by the Chakdol Gee, who doesn’t want the Quarren or Mon Calamari to join the war effort. And Connix can’t get in touch with Leia and friends because the First Order is apparently jamming communications across the system. 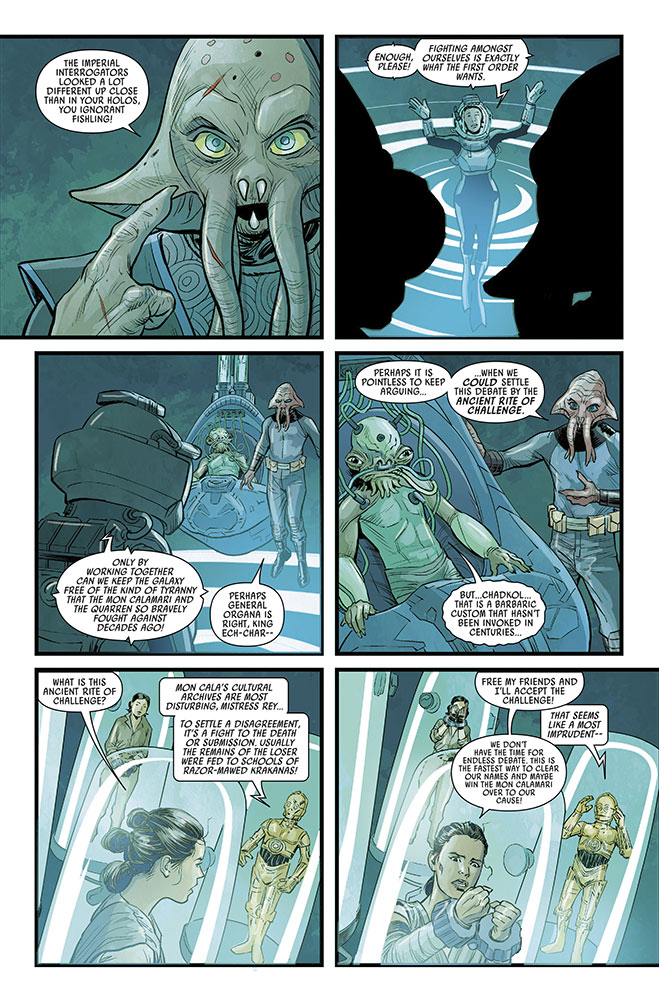 Another cliffhanger ending leaves Finn unconscious and Leia’s group wondering if they’ll even be able to leave the planet without being taken out by the Quarren opposition to their cause. This wasn’t my favorite issue of Star Wars: Allegiance so far, as it mostly stalled the forward momentum in favor of two separate action sequences, but writer Ethan Sacks and artist Luke Ross are still successfully demonstrating their skills at capturing the overall spirit of the larger franchise. Now that the large-scale conflict and explosions are all hopefully out of the way, I’m crossing my fingers that this series gets back to furthering what it needs to accomplish in its final issue: helping to set up the beginning of Star Wars: The Rise of Skywalker before it hits theaters this December. 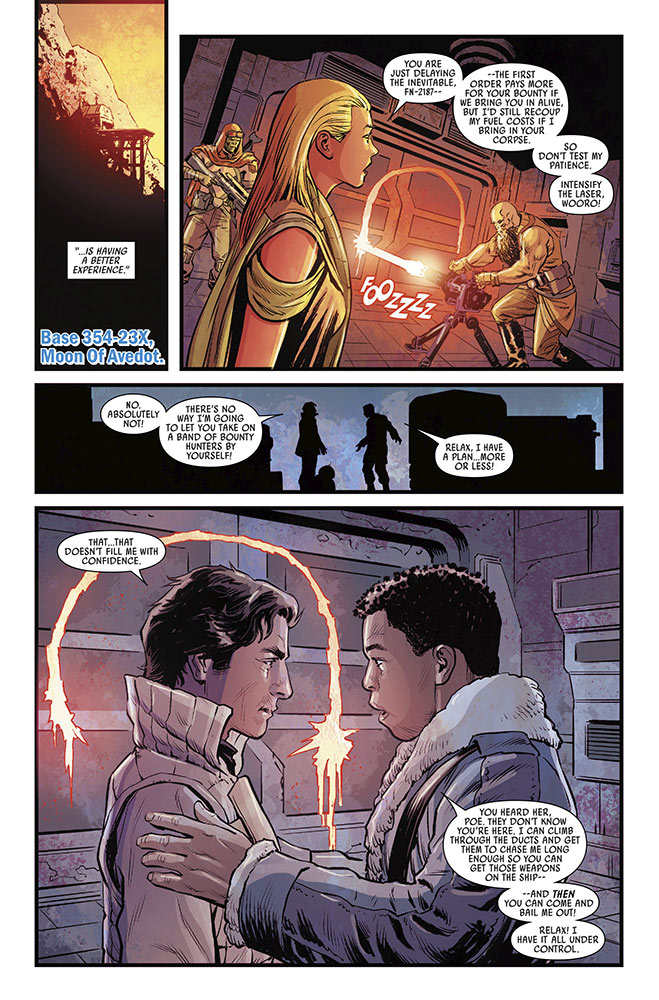