Some of the most popular content ESPN has ever offered is just a couple of guys in a room debating sports. That’s exactly what The Boardroom on ESPN+ is, except for the fact that it features NBA superstar Kevin Durant.

The second season of The Boardroom tips off with Durant discussing the current state of NBA free agency and how it has impacted the game with Stephen A. Smith, who is perhaps the most famous and well-respected basketball journalist today.

It’s not exactly groundbreaking, but I enjoy the format of The Boardroom. One professional athlete at the top of his game, One guest, perfectly suited for the topic of the episode. A mediator to make sure things don’t get Jim Everett vs. Jim Rome levels of ugly. The show has everything in needs to dive into some of the hottest topics in sports.

The only problem I have with this particular episode is the difference in TV presence between Durant and Smith. Look, Durant is an incredible basketball player and one of my absolute favorites to watch, but when it comes to talking on television, he kind of shrinks up in the shadow of Smith. I don’t blame him. That’s a big shadow to work in. Maybe another guest could have been added to balance the conversation out a bit.

Aside from that though, this is a very interesting episode. The two discuss the unprecedented power NBA stars have in determining the balance of power in the league. Many fans feel as though the outcome of a season is nearly completely determined in free agency and, with last year’s Toronto Raptors being an outlier, they are mostly right.

It’s interesting to see Smith and Durant peel back the curtain and give us a look at their relationship and how it is used throughout the course of an NBA season and more importantly, free agency. Smith mentions the idea of being given information on where a player will sign but being asked not to report it. While he says he respects that, he also expects the player not to share that information with another reporter to give them the story because that would, to put it nicely, put a strain on their relationship. That’s a dynamic I never really thought about and it’s interesting to hear them discuss it so openly. 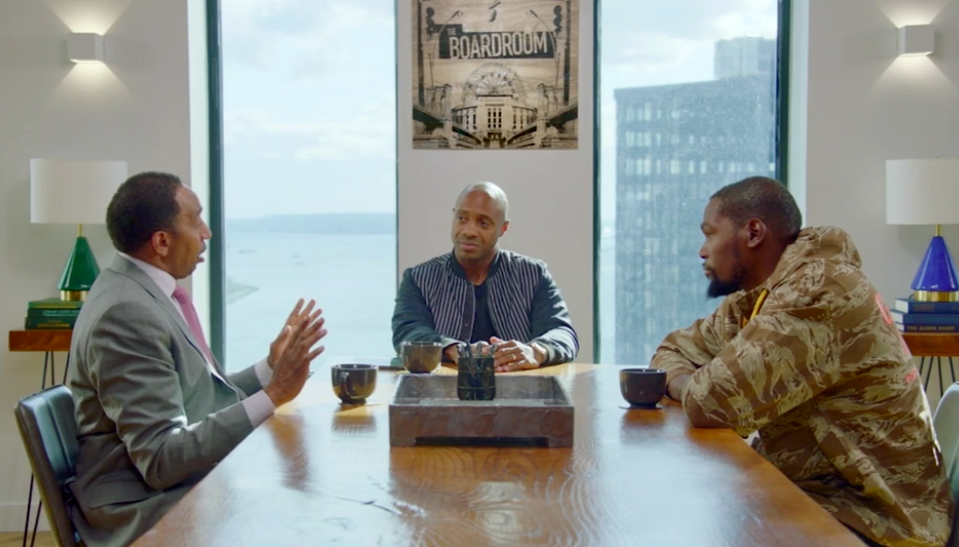 They also pose an interesting argument, which a lot of NBA fans have an opinion about. Smith points out that he was disappointed in Durant’s decision to sign with the Golden State Warriors back in 2016, citing that he severely shifted the balance of power and made it so that there was no reason to really even play out the season. Durant responds by simply saying, “that’s not my problem.” And he’s right. It’s not his job to create the best competition. His job is to win basketball games, and he has done a lot of that over the past few years. Smith agrees with his point, but still feels robbed of the best basketball we could see.

Overall, The Boardroom is entertaining. It’s always nice to get a peek behind the curtain and see sports form an angle we don’t normally get to see. People have a lot of different opinions on Stephen A., but the guy knows how to talk on TV. Especially, when dealing with a superstar athlete like Kevin Durant.

All of season one and now the first episode of season two of The Boardroom are streaming now on ESPN+. Fans can subscribe to ESPN+ for just $4.99 a month (or $49.99 per year) and can cancel at any time.