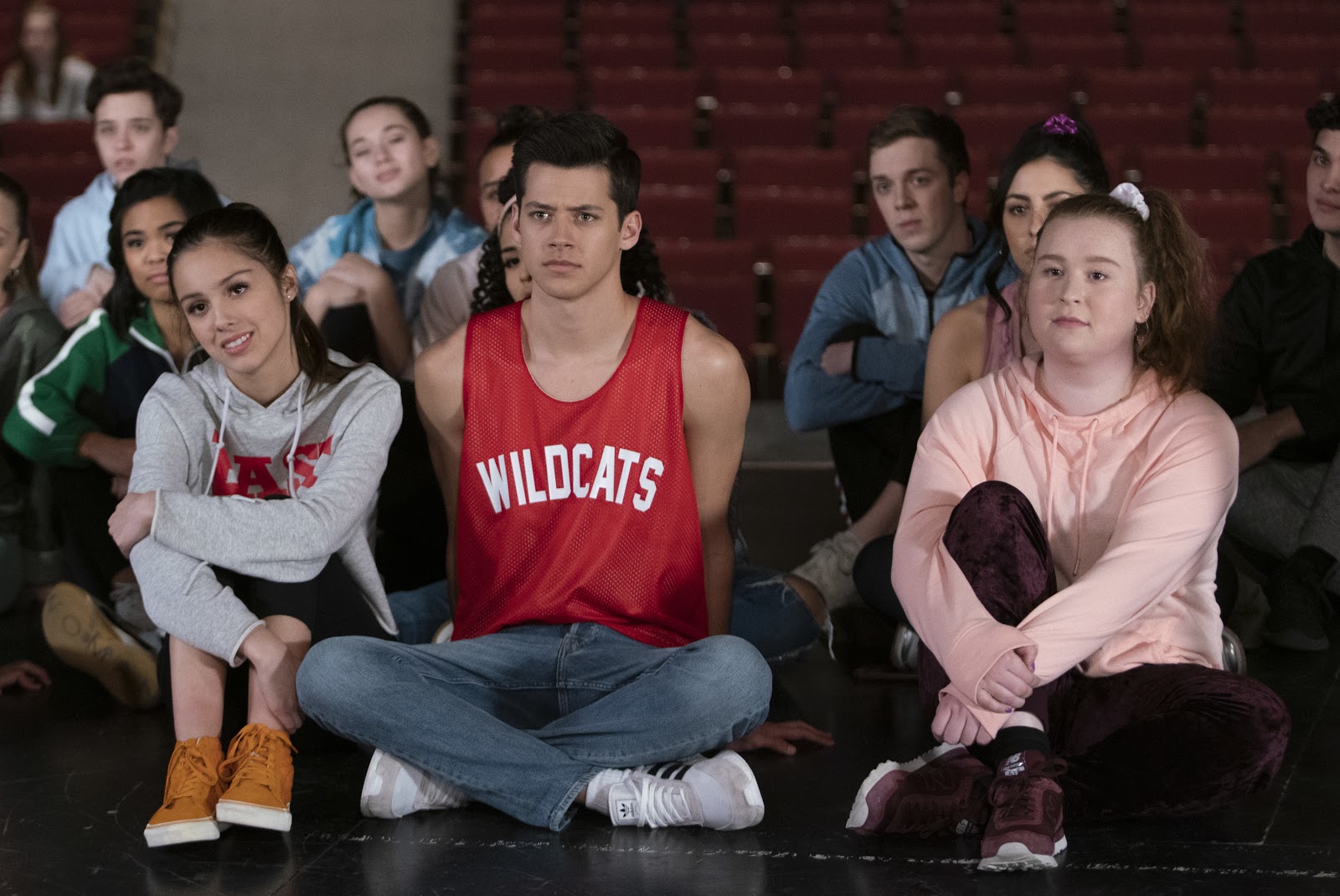 What team? (WILDCATS!) What team? (WILDCATS!) Wildcats! (GETCHA HEAD IN THE GAME!) The time has come, fellow spiritual graduates of East High, as the franchise gods have smiled down upon us. The doors of our favorite Albuquerque-set-but-filmed-in-Utah-cause-why-not school have been unlocked and reopened for us to “Stick to the Status Quo”, ask “What Time Is It?,” and have “A Night to Remember.”

High School Musical is back, albeit in a drastically different format. In this version, the real East High has never put on a production of the fake East High’s iconic High School Musical, creating the scripted/mockumentary series High School Musical: The Musical – The Series. Disney+ has the budget for a colon AND a dash. That’s the power of a multi-media conglomerate.

I am happy to be your Wildcat tour guide through this season, recapping all the craziness going down in the halls of our imaginary alma mater. My credentials include: Going to a proper High School Musical 2 viewing party, coaxing my mother to take me to see High School Musical 3 opening weekend, and meeting Monique Coleman in person at a “Dream Big, Princess” event while having the restraint to not freak out over the greatest line of music sung in television history. Also, my official preferred order is 3-2-1, which is highly contested, but correct. 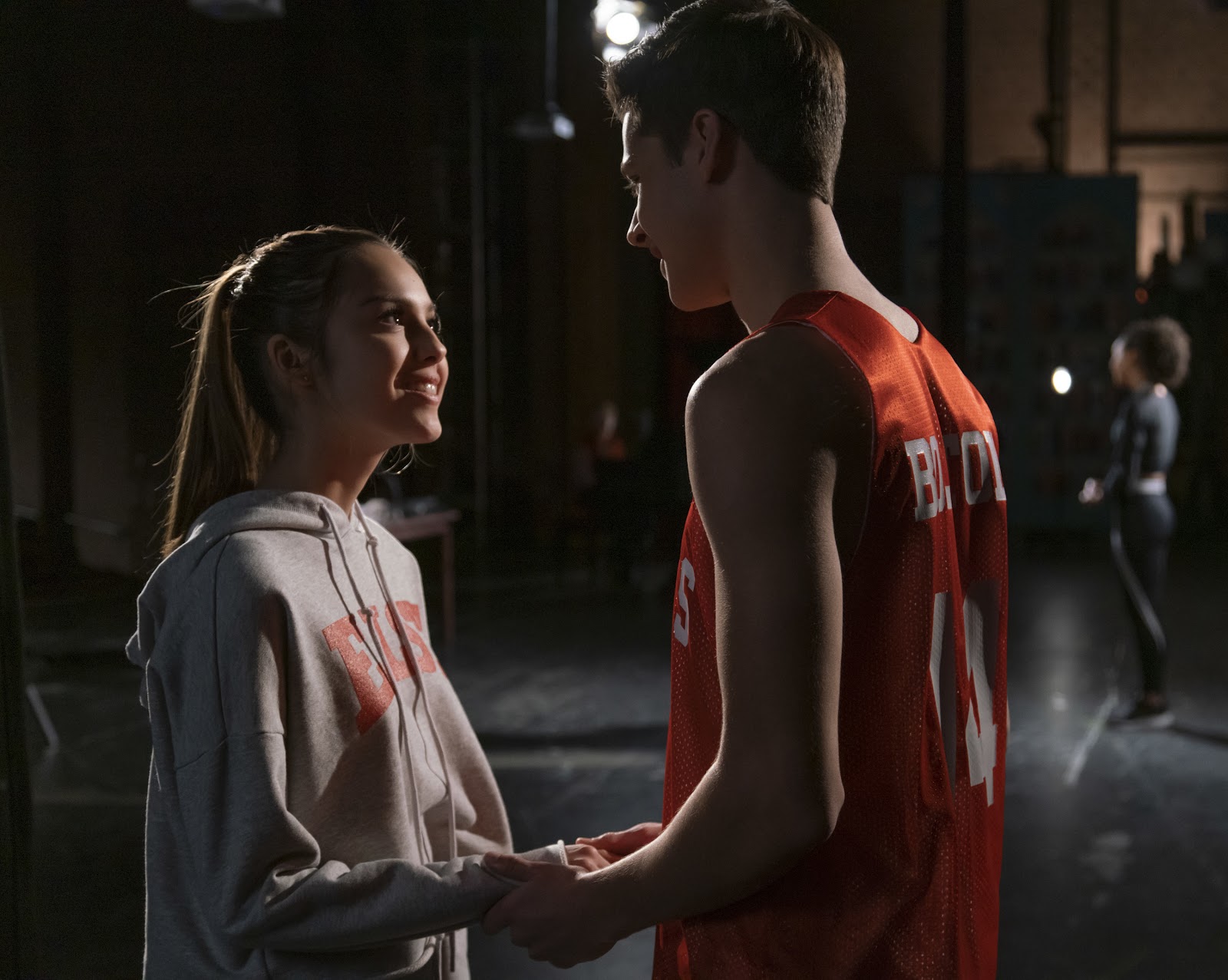 Let’s get to the premiere, shall we? *screams and cheers running to the locker room to change into Wildcats jersey*

We open with Miss Jen watching the first film in her car before the first day at school at East High. On the nose? For sure. Commendable activity that I have done before many a day of school/work? Darn tootin’. She becomes the first introduction for the large ensemble to kick off the 30-minute premiere episode.

We then run into Nini and her friend Kourtney (Her summer was spent dismantling the patriarchy, so we have an icon on our hands) and Ricky with his friend Big Red. Nini and Ricky haven’t seen each other since the beginning of summer when things got very tense, very quickly.

Before she went off to a summer theater camp (where she played Marian in The Music Man, ‘cause we have a L E A D on our hands), Nini wrote an original song to display her affection for Ricky and posted it on Instagram. You read that correctly. She posted a video singing how she loved Ricky on a social media platform. Now reader, I have to admit, after this reveal, Nini had to claw her way back to my good side during the pilot. People posting themselves singing on Insta is the cringiest thing in the world, next to people “apologizing” with the phrase “Sorry if that offended you” and films starring Nicholas Cage. However, the big twist was Ricky denied reciprocating the “I love you” and awkwardly left the interaction. The ukulele song just became even cringier. Their reunion in the hallway starts with Ricky apologizing for that fateful night, but Nini comes back with the reveal that she had a showmance with the Harold Hill to her Marian. Honey, I gasped. This started an onslaught of inside-baseball-esque musical theater references throughout the episode that was like a comforting hand on my shoulder saying, “It’s all going to be ok.”

We head to the first assembly of the year where lots of bombshells are dropped. Seniors get to wear hats on Fridays! (I got out 5 minutes early everyday my Senior year, so I win. It wasn’t a competition. Yet, I win) Miss Jen is the new drama teacher and is putting on a production of High School Musical! Carlos is her “right hand man,” and yes, that is a reference to Kate Reinders’ performance in Something Rotten! Also, Carlos is me! (Mr. Mazzara: “Where are you supposed to be?”  Carlos: “Broadway.”)

With the news of the musical, we return to the iconic East High lunchroom, where no one seems to be sticking to the status quo. Is a lunch in that cafeteria without Taylor McKessie a lunch at all? This does introduce us to Ricky’s foil and Nini’s new man, EJ. 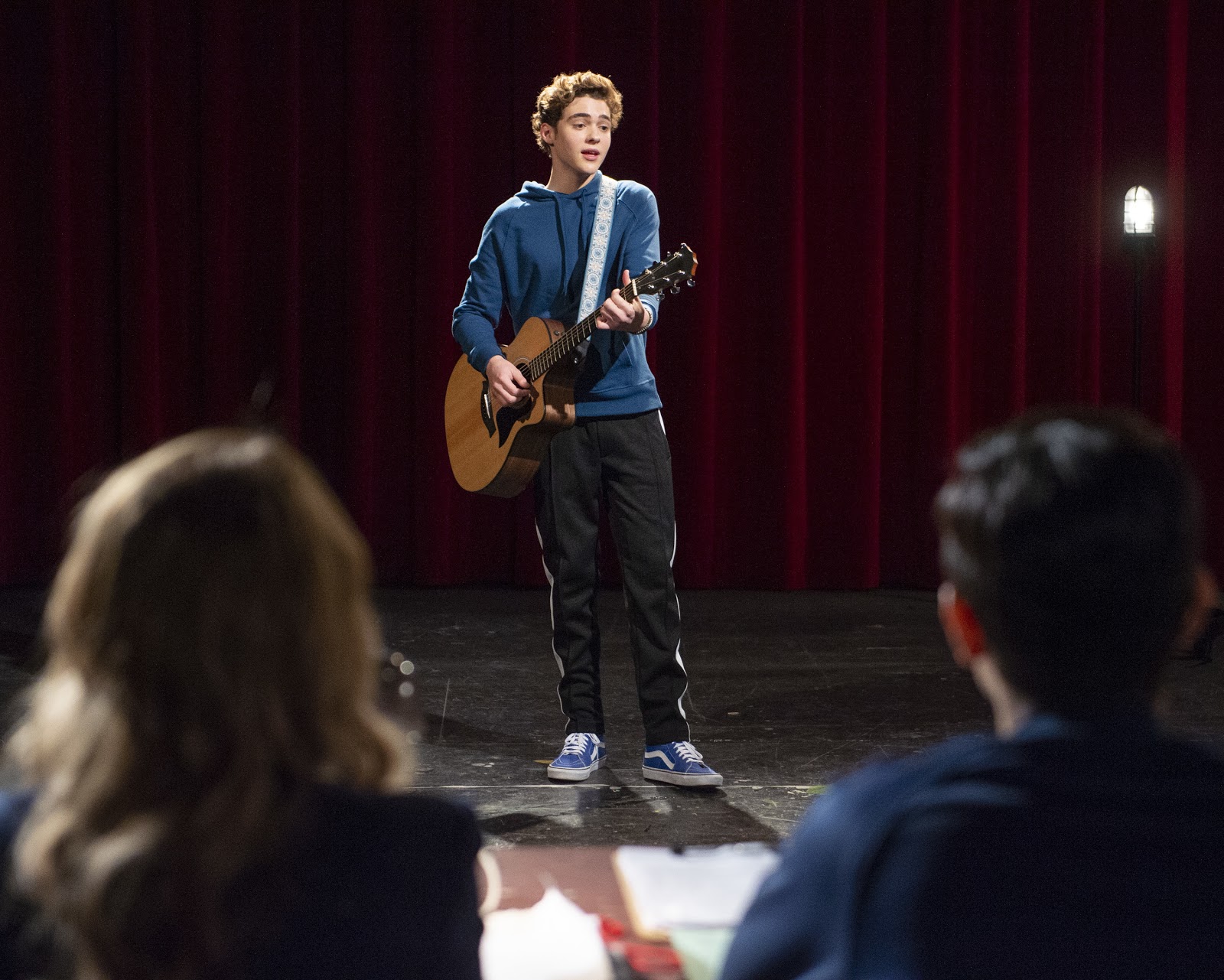 EJ is determined to be cast as Troy alongside Nini’s Gabriella, as he exhibits BTE (Big Troy Energy). He wants to dress in costume for the audition. He is co-captain of the Water Polo team. (um, sure?) He is destined to be the next Troy Bolton.

We find out within the span of a few minutes that EJ fell in love with Nini when he was the back of a cow in a production of Gypsy which had me not only gasping for air, but remembering Laura Benanti’s sensational acting choice playing the aforementioned cow in the most recent Broadway revival of Gypsy. Take a gander. On top of that, last year Nini played a tree in the school’s production of Brigadoon, but she still gave everyone opening night cards. I am writing these show anecdotes to inform you all that this show was made for me and me alone. 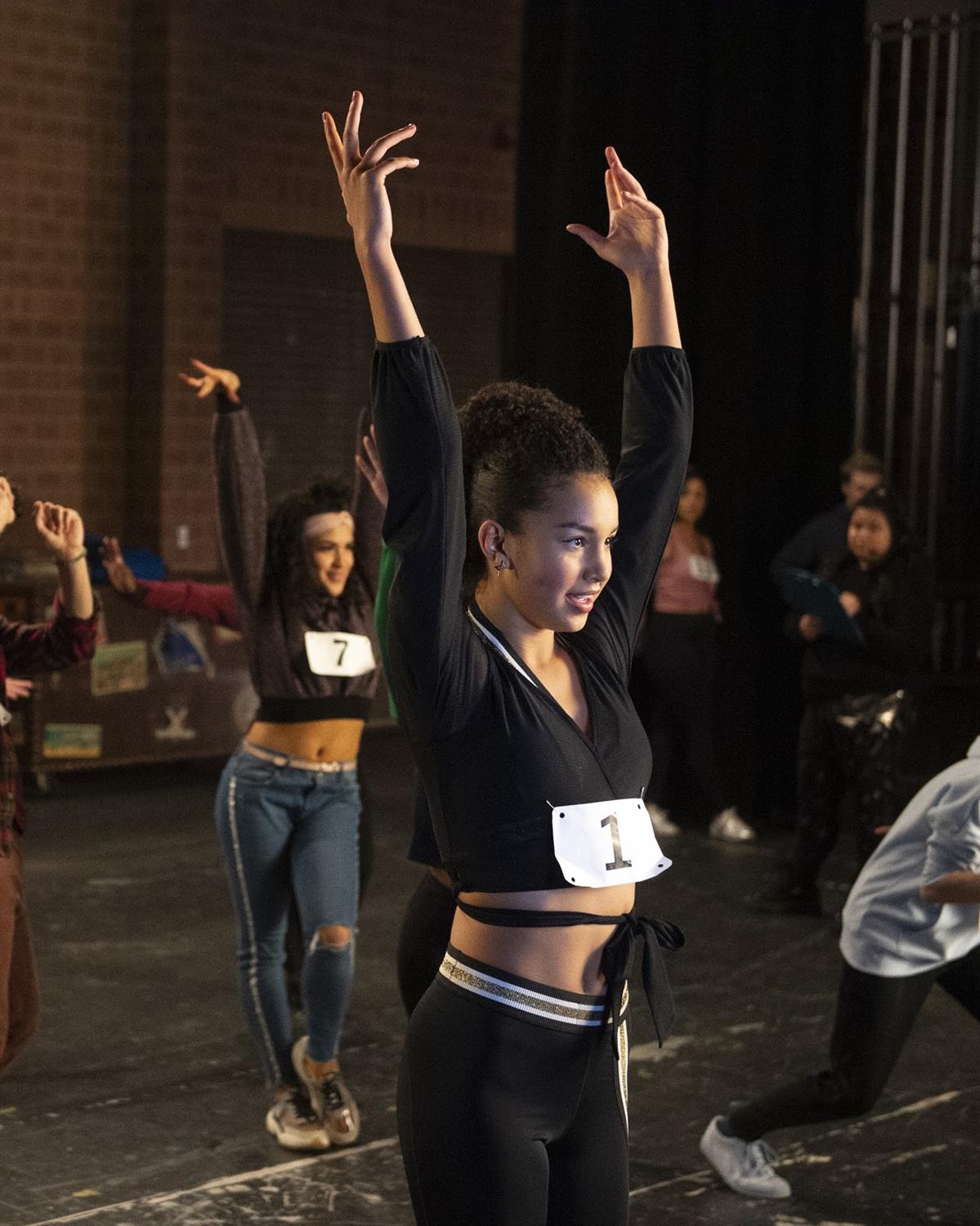 The auditions begin and we get our final major introduction to Gina, a new student who has just transferred and is acting as if this audition is for the 2nd national tour of A Chorus Line. She is ready to cut throats at the open call. She doesn’t need the sides for Gabriella, she is off book! She can smell the fear in Nini and the Drama Desk nominations coming her way.

It’s Nini’s turn to sing her 32-bars and the power goes out. Thanks to her love triangle’s other two corners providing light, she pulls a Smash and has a gorgeously shot dream sequence as she sings “Start of Something New”. Ricky wants to prove himself to Nini, so he auditions as a non-musical fan by singing the INSTAGRAM UKELELE SONG. This is after he improved his own monologue about his relationship with Nini. The melodrama jumped out! 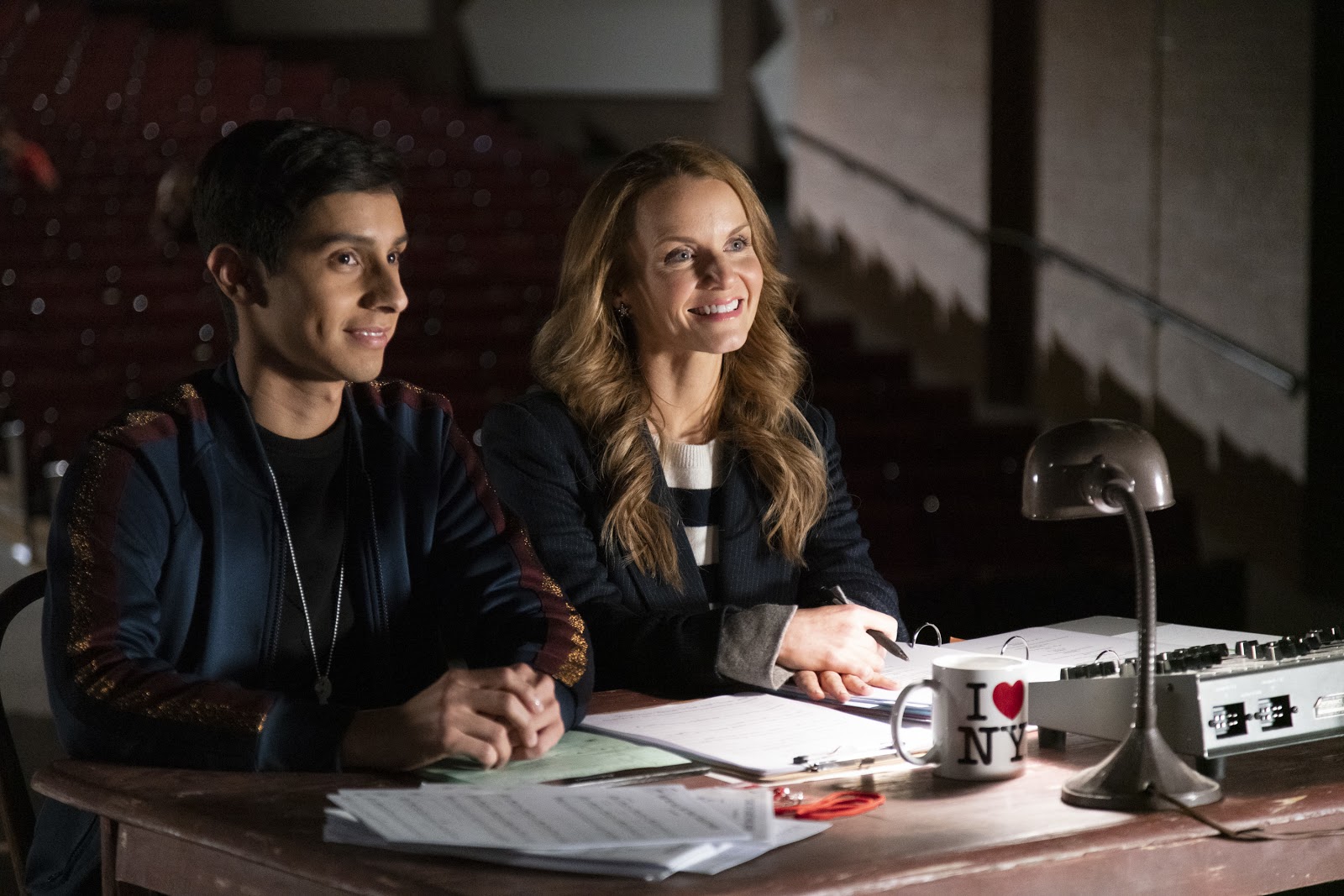 Nini confronts him post-audition, confused at his abundance of straight confidence after he was the one in the wrong. (She uses “You yelled at The Greatest Showman” as part of her argument, but like, didn’t we all?) He says he wants to show that he is trying and Nini has a gleam of appreciation in her eye.

The cast list goes up and we have our Troy and Gabriella; it’s Ricky and Nini! EJ and Gina are understudies and it’s about to go full Ruthless! up in East High. I cannot wait.