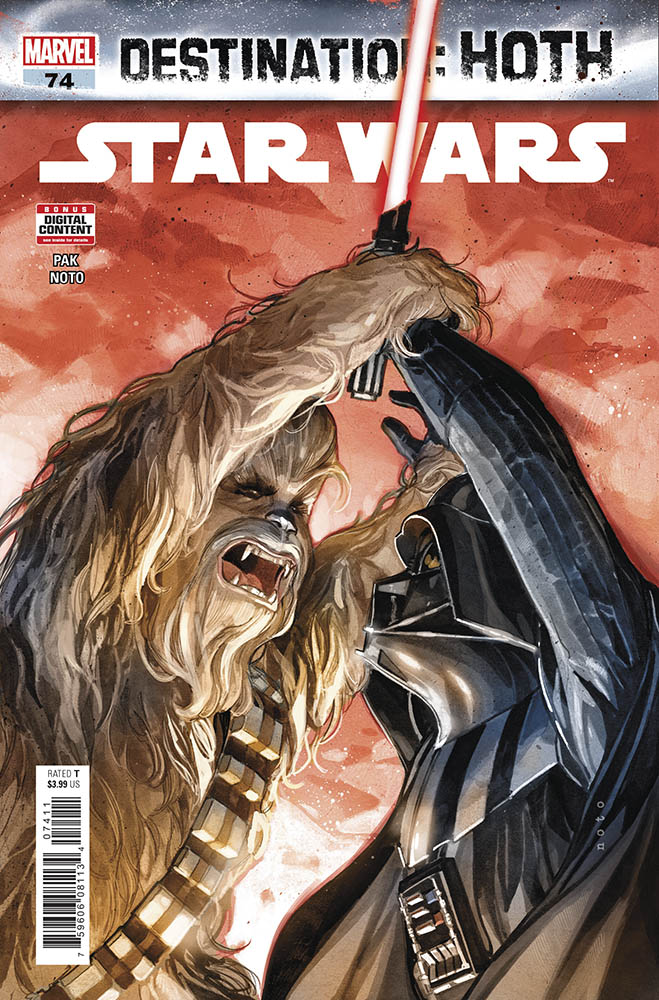 When the current run of Marvel Comics’ main Star Wars title began in the beginning of 2015, it was understood that the stories contained therein would fill in the narrative gap between Episode IV: A New Hope and Episode V: The Empire Strikes Back in the larger Star Wars saga. And now that this title is coming to an end, the expectation– at least, for me– is that the events of the comic will flow directly into the beginning of Empire— with the subtitle of its penultimate issue (#74) “Destination: Hoth” reinforcing that notion.

Now, bear in mind that after #75 hits shops next week, we’ll also get the one-shot publication Star Wars: Empire Ascendant in mid-December that will bring the characters and plot even closer to the Darth Vader’s discover of the Rebel Alliance’s hidden base on the frozen ice planet, but surely with a prominent marketing gimmick like “Destination: Hoth,” we’d start to see hints of them going in that direction. Unfortunately, that sales strategy on Marvel’s part has proven to be a bit of false advertisement, as there isn’t a single mention of Hoth present at all in Star Wars #74. 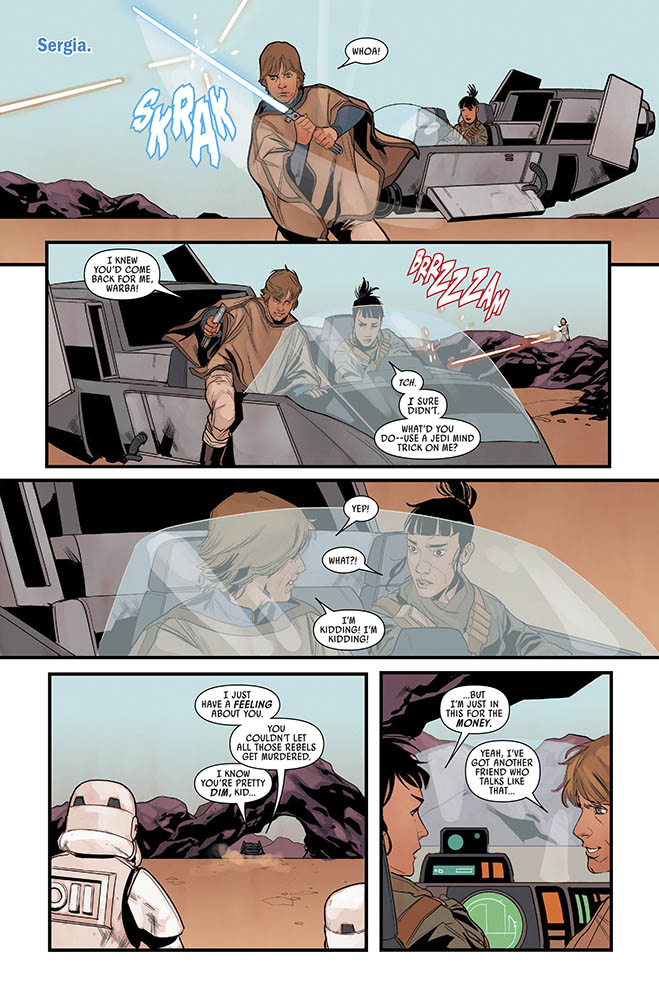 Instead, we get the continuation of the “Rebels and Rogues” storyline and our heroes’ three-pronged mission to “thwart the evil Galactic Empire,” as the issue’s opening crawl states. Luke Skywalker is on the planet Sergia evading stormtroopers on lizard-back, C-3PO and Chewbacca are on the asteroid K43 facing off against Vader and trying to save a sentient species of rock people, and Han Solo and Princess Leia are attacking a Star Destroyer with a tiny shuttle to help out Leia’s ex-boyfriend (Shouldn’t they be running into a bounty hunter on Ord Mantell by now? I have a sinking feeling we’re never going to get to that particular fireworks factory.)

All these threads are okay as far as setpieces go, but with the comic ending in a week (though not really: it’ll be back in 2020 with reset numbering set after The Empire Strikes Back) I can’t help but think these circumstances should come across as a little bit more climactic. This feels more like a story set in the middle of the run than its end, and the pivotal side characters of Dar Champion and Warba are pretty tepid as far as new introductions go. Even the showdown between Chewbacca and Darth Vader as depicted on the cover doesn’t begin until the final two-page spread, and even then it’s just a cliffhanger tease to tune in next issue. 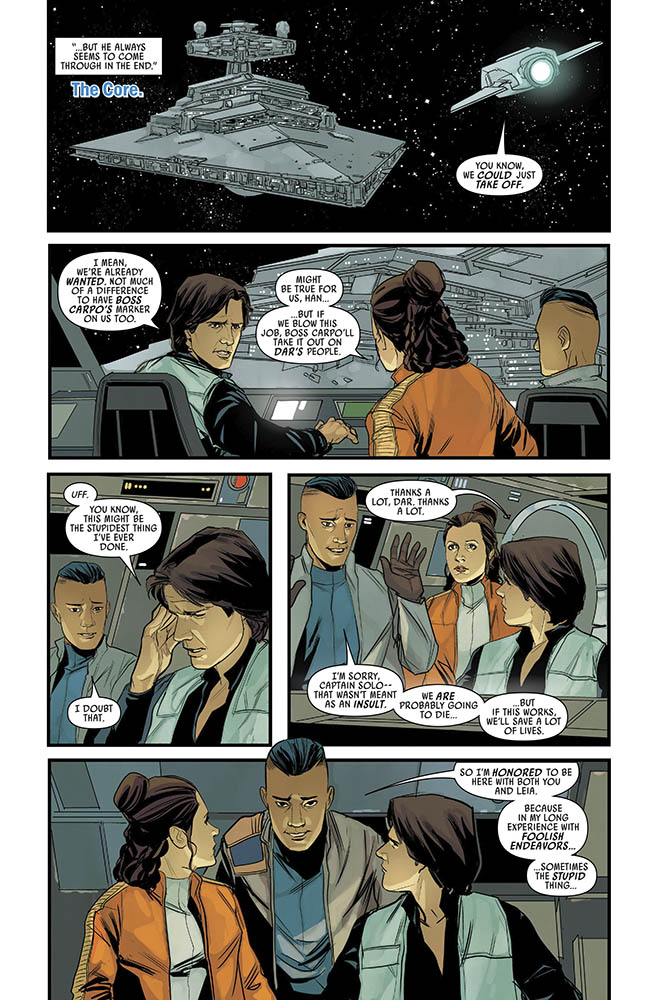 I’ve voiced my frustrations with Marvel’s ongoing Star Wars title before, but I was really hoping that now that my biggest concern about the series has been addressed, it would get out of the muck and mire, read less like a gap-filler, and actually gain some forward momentum as the Rebels find their way to Hoth. Sadly, this second-to-last issue feels more like the otherwise talented writer/artist team of Greg Pak (X-Treme X-Men) and Phil Noto (Jonah Hex) are running out the clock rather than running out of breath from excitement like they should be.

I’m not holding out a lot of hope for next week’s final installment delivering anything remotely satisfying to wrap up this 75-issue run, but I will cross my fingers that Empire Ascendant and next year’s relaunch will benefit from a change of status quo and the eventual loss of Han Solo. It’s something that shook up the original Marvel Comics Star Wars publication back when The Empire Strikes Back was first released into theaters in 1980, so there’s no reason it can’t do the same with this one. 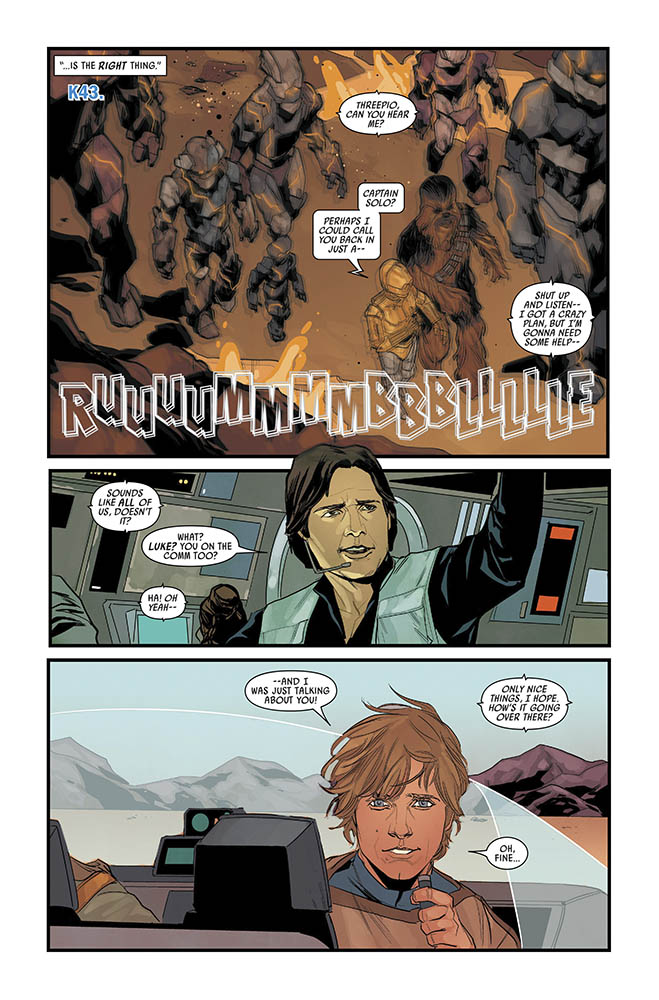