Touchstone and Beyond: A History of Disney’s “Splash”

It’s been thirty-five years since the world got soaked by Splash. This romantic/slapstick comedy was the first film from the newly created Disney motion picture label Touchstone, and it gave a launching platform for many writers, directors, and actors. Formed in 1983 by then CEO Ron Miller, Touchstone was a place for filmmakers to work on projects that interested them. Walt was gone and it was time for the Walt Disney Company to adapt. There was a lot riding on the release of Splash. Producer Brian Grazer and director Ron Howard were just starting to find their place in Hollywood, and the leading man, an unknown Tom Hanks, would propel himself to superstardom from his role in Splash. 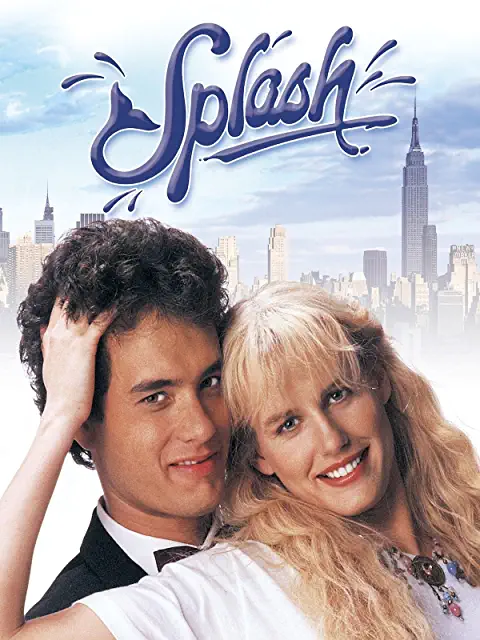 Touchstone was established to create a whole new set of films. From coarse language to brief nudity in Splash it was clear that the Touchstone label was going to veer away from the traditional family films of Walt’s day. When Splash premiered and was a success it validated Ron Miller’s creation. Filmgoers were willing to embrace films from Disney that had their characters swear and show some skin.

With an estimated budget of eight million dollars and finishing with a total gross of almost seventy million dollars at the North American box office, Splash was a home run out of the gate for the new label.

The story starts off in Cape Cod as a young boy named Allen is on a ferry with his family, when he notices something shiny in the water. Allen, even though he can’t swim, leaps into the water and meets a young mermaid. They only spend a few seconds together before Allen is pulled out of the water.

Fast forward twenty years and we are in the heart of New York City where Allen, played by Tom Hanks is running the family fruit business, and trying his best to deal with cranky customers and ensure the business stays afloat.

Allen is single and lonely because he is unable to commit to anyone. After a drunken night at a wedding, Allen makes his way to Cape Cod where he almost drowns and is saved by the now-adult version of the mermaid he saw as a child (though he doesn’t recognize her), played by Daryl Hannah. Allen heads back to New York.

The mermaid finds Allen’s wallet and heads to New York where she is found at the Statue of Liberty, naked, which attracts the attention of the police and gets her arrested. With Allen’s wallet in her possession, he is called and the two are reunited at the police station.

Daryl Hannah makes this film shine even after thirty-five years. From using small moments of facial expressions to convey her feelings underwater, to her portraying the stranger in a strange land character when she arrives in New York, Hannah owns every scene that she is in. Her growth from mermaid to human, and her love for Hanks’ character is something that if not done properly with the right actor, could have been a disaster. Daryl Hannah makes the audience believe in mermaids.

Tom Hanks is hilarious as the lovelorn Allen. He’s charming and funny, and full of heart. His disbelief when Madison is revealed to be a mermaid is done so well. He stands in the background in shock. The biggest secret of his relationship is exposed in a public venue with reporters taking pictures of Madison’s mermaid tale; the look on Hanks face does more to convey his feelings than anything he could say.

John Candy is hilarious, and Eugene Levy as the scientist Dr. Kornbluth is the comic relief this modern fairy tale needs. Candy is at his best when he is sarcastic and silly. The scene of Candy and Hanks playing squash is pure slapstick humor. From smoking while serving to stopping for a cold beer in the middle of a squash game this scene is the levity the serious parts of the film need. Freddie is no schlock and proves that he can contribute to the family business and is the one who encourages Allen to pursue Madison.

John Candy’s character also has some of the worst parts in the film that show how dated this film is in parts. Freddie likes to purposely drop coins on the ground so he can then look up women’s skirts as he picks them up. What makes this cringe-worthy, is that Freddie, a fully-grown man, does the exact same thing outside the wedding in the first half of the film. Not only does this scene show that Freddie is a dated portrayal of what was acceptable for a womanizing bachelor but everyone in the scene seems to laugh it off as if it’s not a big deal. Today this wouldn’t draw any laughs at the theatres. This lone action would taint the good qualities of Freddie and the film itself.

See It. This was a great experiment for Disney and helped the company survive a stale period when Walt Disney Pictures was struggling at the box office. Splash was a risk but proved that Ron Miller’s instinct to create Touchstone was right. Disney could make more adult-themed films and continue to be successful. Moviegoers embraced the story of a mermaid, and five years after the success of this film, Walt Disney Animation would start their renaissance with another fishy tale, The Little Mermaid.

Watching Splash, I laughed at the funny parts, cringed at the cringe-worthy moments, and came away feeling happy by the end. You may not wish to add the film to your library, but hopefully Disney+ will add Splash soon as it is one to watch.