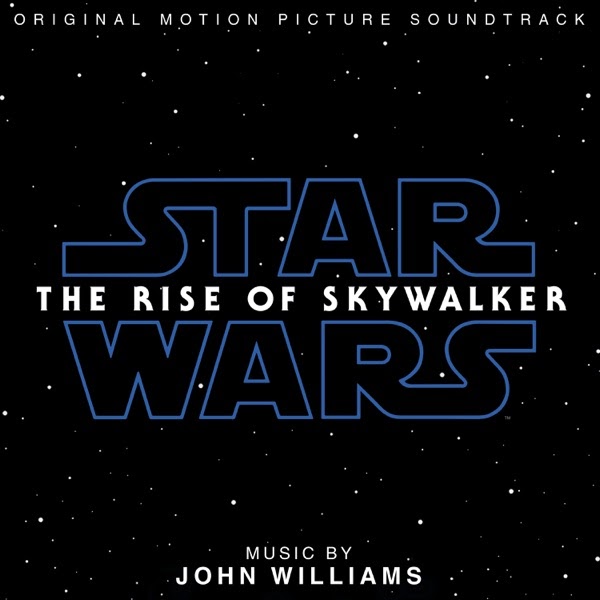 Now playing in theaters worldwide, Star Wars: The Rise of Skywalker is the last film in the Sequel Trilogy (Episodes 7-9) and the end of the Skywalker saga. This is also the last time you’ll see the words “Music by John Williams” in the end credits without it being merely adapted from his themes on future Lucasfilm productions. With that, I dove ears first into the Original Motion Picture Soundtrack of Star Wars: The Rise of Skywalker.

Having not seen the film yet, I began a symphonic journey through the ninth film in the saga knowing full well that I may be spoiling things for myself. Several of the track titles contain subtle spoilers, but more so does the music itself. John Williams famously implemented character themes starting with the original film and while they don’t always underscore that character’s actions, they often do. The reintroduction of themes that represent characters from the previous films give you an indication of just how involved they are in this story. If you want no spoilers, reading this soundtrack review is at least mildly foolish. I can’t speak to the on-screen visuals that accompany this symphony, but I know a thing or two about Star Wars musical themes.

As an album, this 77-minute masterpiece fits right at home with the soundtracks to The Force Awakens and The Last Jedi but reinstates so many leitmotifs from the Original Trilogy that you sometimes feel like you’re listening to the wrong soundtrack. It repeats a lot of the themes from the new trilogy, particularly “Rey’s Theme,” “Kylo Ren’s Fanfare,” and “March of the Resistance.” Sadly, my favorite theme from the new trilogy (“Rose Tico’s Theme”) is barely present.

At times, the Rise of Skywalker plays like the set list to a John Williams Star Wars themed “All the Hits” Las Vegas Residency. “Luke’s Theme” is always a given, but the “Empire March” triumphantly returns and gets a lot of attention, as does “The Emperor’s Theme.” You’ll also find “Leia’s Theme” in a few places, which is my favorite Original Trilogy theme. A track towards the end of the album called “Reunion” plays like a sampling of many uplifting themes from the saga, a buffet of favorites across the nine-part saga, primarily focused on the Original and Sequel Trilogy.

A handful of new themes are present and are best heard on tracks called “The Rise of Skywalker,” “The Speeder Chase,” “We Go Together,” “Farewell,” and “A New Home.” Most of the new themes remind me more of John Williams’ work on the first three Harry Potter films than his Star Wars work. The exception is “The Speeder Chase,” which calls to mind his Indiana Jones scores. The one that feels most at home amongst the Star Wars themes is “Farewell.”

Closing the final Star Wars saga soundtrack by John Williams is a track familiarly titled “Finale.” This 10-minute magnum opus starts with the iconic Star Wars theme and leads into a beautiful arrangement of themes from the saga, including the new ones and classics that forever tug at your heartstrings. It all fittingly ends the way it all began.

If you stuck a blaster to my head and made me pick my favorite soundtrack from the Sequel Trilogy, I’d say The Last Jedi is still my favorite of the three auditory experiences. But The Rise of Skywalker would take a close second if for no other reason than it features some great new music by John Williams, the last we’ll get in the Star Wars saga, and also reconnects the music back to its roots with more samples from the Original Trilogy than The Force Awakens had.