Touchstone and Beyond: A History of Disney’s “Tombstone”

Hollywood Pictures’ 1993 western Tombstone brought audiences to the Old West and to the time of gunfighters and lawman bringing peace to lawless towns. Starring Kurt Russell and Val Kilmer, the film told the tale of Wyatt Earp and his family as they arrive in Tombstone, Arizona to make their fortune in the silver mines. No matter how hard they try the Earps cannot escape their law enforcement history and a conflict that would change the lives of the Earps and the town of Tombstone forever. 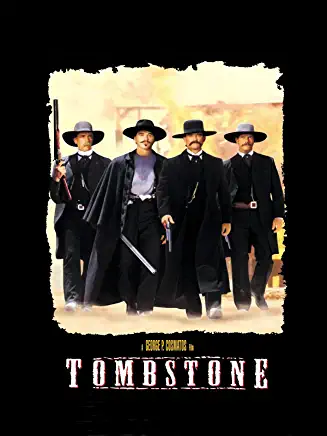 Tombstone starts off slow, with the peaceful arrival of Wyatt Earp, Kurt Russell, in Tuscon, Arizona. There is hope and beauty in the surrounding landscape and Wyatt looks relaxed as he meets up with his brothers Virgil, Sam Elliott, and Morgan, Bill Paxton, before they head for Tombstone. The town is exploding with growth thanks to the recent discovery of silver. The Earps hope to make a lot of money and retire to an easier life.

That is not to be. Though they take an interest in a saloon in town and control of a faro table at the saloon, trouble occupies Tombstone. A ruthless band of thugs called the Cowboys is doing whatever they want. The law cannot stop them. Virgil Earp grows a conscience and is embarrassed at how much money the family has been making while the regular town folks are running scared from the wild Cowboys. He takes on the town sheriff position with Morgan joining him. The first law they enact is to ban the wearing of firearms in Tombstone. Wyatt is enraged by his brother’s actions.

Wyatt has tried to move on from his past, but time and circumstance will not allow him. From the growing threat of the Cowboys, pressure from the town mayor, and a budding romance with Josephine Marcus, Dana Delaney, Wyatt is dealing with a lot and trying to make the best choices for his family.

One cannot run from the past, as tension is building in the town, Wyatt is sworn in as one of Virgil’s deputies. The anger between the Cowboys and the Earps explodes as it’s reported that members of the gang are by the O.K. Coral and wearing guns. Virgil leads his brothers and Doc Holliday, Val Kilmer, to arrest the men. The eventual shootout will leave members of the Cowboys dead and Virgil and Morgan wounded.

Cowboy leader Curly Bill Brocius, Powers Boothe, enacts a plan to seek revenge on the Earps. Morgan is killed and Virgil is badly wounded. The Earps leave Tombstone and Curly Bill sends a group of assassins to kill the remaining members of the family at the train station. Wyatt Earp is waiting and brings down the thunder of revenge on those that harmed his family. He leaves Tombstone and Josie Marcus behind for vengeance.

With reformed members of the Cowboys and his best friend Doc Holliday, Wyatt leads the charge in hunting down and killing the Cowboys for what they did to his family. The last half of the film is some of the best vengeance scenes filmed on the silver screen.

Tombstone was the first film in less than a year to explore the life of lawman Wyatt Earp. Unlike the Kevin Costner epic of six months later Wyatt Earp, Tombstone was a financial and critical hit. What makes Tombstone so good is that the narrative is confined to the events of when the Earps arrive in Tombstone and the ensuing results of the gunfight at the O.K. Coral.

Kurt Russell and Val Kilmer are perfect as Earp and Holliday. They capture the good and bad of the two historical figures and their performances dominate the screen. Kilmer is perfect as Holliday whether he is drunkenly mocking people at the card tables or pushing himself out of bed to join the Earps because he heard there would be trouble. Doc Holliday is not a good guy, but Kilmer makes us see Holliday through multiple perspectives. If he didn’t like you then you were in trouble, but as Holliday states when he is asked why he rides with Wyatt on this revenge trek, it’s because Wyatt Earp is his friend and he doesn’t have anyone else. It’s good to be Doc Holliday’s friend.

Kurt Russell matches Kilmer as a Wyatt Earp who is trying to make a new life but ultimately can’t avoid the sins of his past. Russell projects an aura of calm for the first quarter of the film until the murder of Sheriff Fred White. Wyatt subdues Curly Bill, the murderer, and diffuses a rush from Ike Clanton to free Curly Bill. Wyatt states point blank that Ike’s friends might get him in a rush but that will be after Wyatt turns Ike’s head into a canoe with the gun he has. Russell shifts his performance from a man looking for peace to a powerful god of fury with this simple exchange.

The rage Russell projects as the tension heats up and the showdown with Curly Bill is another epic scene where Kurt Russell shows how much of a gifted actor he is. With just one word spoken repeatedly, Russell charges into a gun battle with anger and fury dominating his face and wins the day. When all is done, Russell shifts his character back to the caring friend who visits Doc in the sanitarium and sweeps Josie Marcus off her feet.

The performances of Kurt Russell and Val Kilmer deserved Oscar nominations. They were brilliant and made two questionable characters likeable, but at the same time the viewer could see that Wyatt Earp and Doc Holliday were not pure angels in a corrupt land. They were complex figures who were killers as well.

Tombstone aims to portray Wyatt Earp and his family as good people. The reality is that Wyatt was not a pure hearted soul out to do the right thing. Paying close attention, we see there is a clear line of good vs. evil. The Cowboys are bad, while the Earps are good. A casual viewer would be forgiven to think that Wyatt Earp was a great person. His reputation in history is based on Wyatt Earp’s self-promotion in the early 20th century Hollywood. He was the one who lived the longest, so therefore his story is the one we remember. To the victor in history is how the story shall be written.

See It. Tombstone is action-packed, concise on its storytelling and allows us to interpret the characters based on the most well-known events of their lives. What happens in Tombstone, Arizona is what all the characters are known for. Rather than making a three-hour film that gives us every little nook and cranny about Wyatt Earp, Tombstone is brisk, and explosive. You will know who Wyatt Earp is, warts and all after watching this film. Tombstone is violent, with death on every street corner of the town. Vendettas were held, and crusades to chase after those who wronged you were a fact in the old west. Tombstone shows you the brutality of the romanticized Old West.